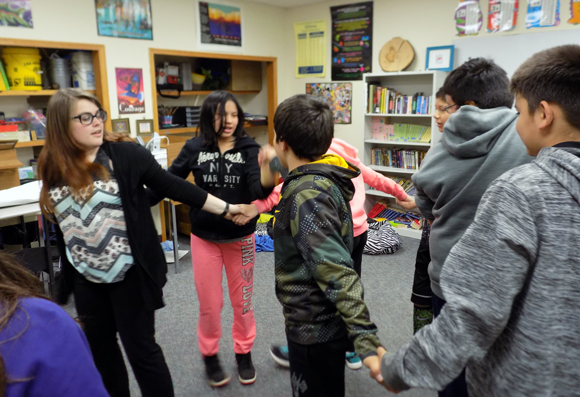 Stepping into classrooms at the Lac Courte Oreilles Ojibwe School in Hayward this spring and seeing bright, eager-to-learn children brought back many childhood memories for Noelle Metoxen.

“It reminded me of my grade school with the small classes, like how I grew up in tribal school,” said Metoxen, a member of the Oneida tribe who attended tribal schools near Green Bay.

Instead of being on the receiving end of a classroom experience, however, Metoxen was on the giving end, part of two University of Wisconsin-Stout upper level social work classes that spent parts of nine days with sixth- through eighth-graders over the course of the spring semester. 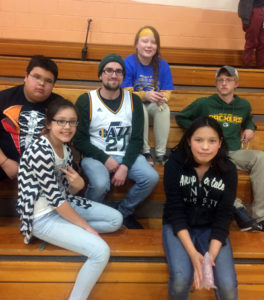 The goal of the UW-Stout students and Associate Professor Crystal Aschenbrener was to mentor the LCO children and help them see the benefits of staying in school, including going to college.

Week by week the children began to see the 15 college students, working in groups, as role models and even friends. “Children are special, and we were trying to get them to see that. We encouraged them to do great things,” Metoxen said.

The UW-Stout project, called the Today and Beyond program, partnered with the LCO school for the first time but isn’t new. For the past two summers and again in late May this year, a UW-Stout group went to Waubay, S.D., to work with Dakota children at Enemy Swim Day School, a rural Sisseton Wahpeton Oyate tribal school on the Lake Traverse Reservation.

Metoxen, who went to Enemy Swim two years ago and again this year, is personally familiar with challenges Native American students can face.

She isn’t a first-generation college student, though. Her mother, after overcoming some personal struggles, graduated from UW-Green Bay when Metoxen was in seventh grade and works for the Oneida tribe. “She changed her life around and became a good role model,” Metoxen said. 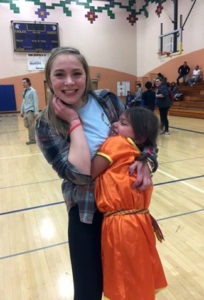 UW-Stout student Katrina Thompson gets a hug from an LCO student.

A vocational rehabilitation major with a concentration in social work, Metoxen wanted to gain more experience working with children via the LCO program. She graduates in December and hopes to go on to graduate school.

Nine times during the spring semester, the class boarded a bus at about 7 a.m. and made the two-hour trip — bus time also was class lecture and discussion time — to the LCO school more than 100 miles northeast of UW-Stout.

The UW-Stout students, from several majors, worked directly with the children on focused activities while also engaging them for about three hours every other Wednesday. They answered their questions about high school and college life as well as other topics, such as sports and the strengths of their culture.

“At first the kids were unsure about our intentions, but they were able to come out of their shell. We created really good relationships,” said Metoxen, whose class partner was Michael Firkins, of Black River Falls, another vocational rehabilitation major. 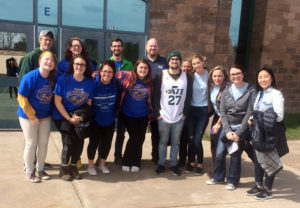 UW-Stout students, including Noelle Metoxen front left, in the Today and Beyond program gather in front of the LCO Ojibwe school in Hayward.

A trip to campus

In late April, a total of 37 seventh- and eighth-graders and five LCO teachers and staff reversed the arrangement and came by bus to UW-Stout.

They met with Barb Miller, Multicultural Student Services director and a Native American, who had an inspirational message; took part in science activities with UW-Stout students and professors in Jarvis Hall; heard from a panel of Native American students; and had lunch a tour of campus.

Metoxen saw the friendships build to the point where the children and their college friends struggled to say goodbye on the last day, after a powwow in early May at the Ojibwe School. The college students were taught Native American dances by their mentees.

“They had us get out there and partake in a powwow, and they laughed at our first attempts. It helped blend our relationship. They could see our vulnerable side. We were just kids once too,” Metoxen said. 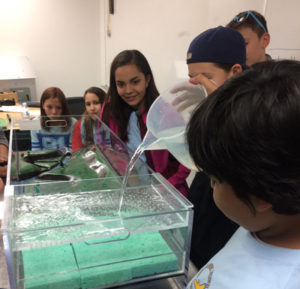 Students from the LCO Ojibwe school try an environmental science experiment in May while visiting UW-Stout.

“We became progressively more comfortable with them. By the last day it was challenging leaving them because I don’t know when or if I will see them again,” she said.

Metoxen was one of six students who had been to Enemy Swim that Aschenbrener recruited to lead the LCO program. “Thanks to these college students’ leadership, initiative and motivation, this first year at LCO was a success,” Aschenbrener said.

“Ongoing positive interactions occurred between the children and the college students, and the children learned more about high school and college along the way. It was a positive experience for all. The principal and I already have plans to continue to move forward with this partnership and the Today and Beyond program,” Aschenbrener added.