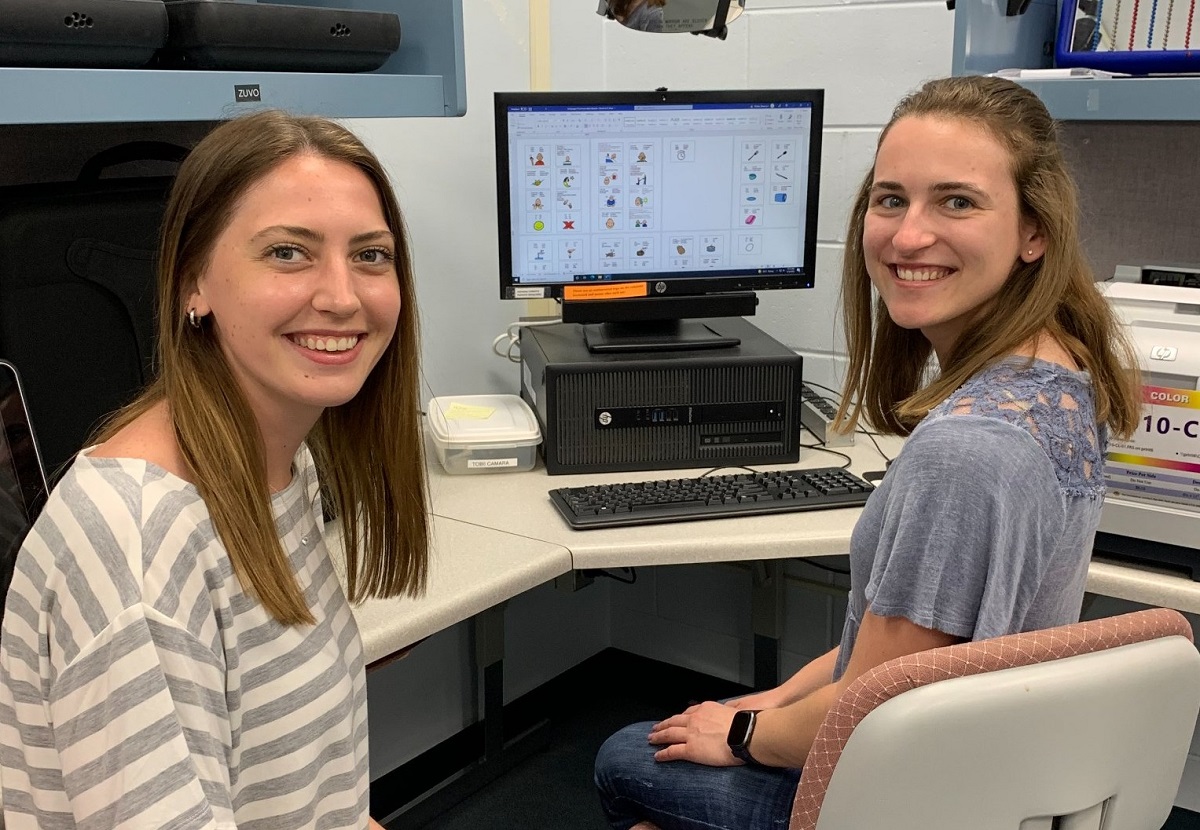 Communication between Ukrainian refugees, their host families and agencies in European countries such as the Netherlands was helped by an unlikely source – the Speech, Language and Hearing Clinic at the University of Wisconsin-Stevens Point.

Two graduate students in speech-language pathology and a professor helped create a “Refugee Dictionary.” It is a compilation of 124 common words, each depicted with an image and the word translated into English, Dutch, German, French, Russian and Ukrainian.

“Our job was to connect pictures with words and coordinate it,” said Pam Terrell, professor in communication sciences and disorders (CSD). “The students did the work and all of the problem solving for this project.”

The students are Morgan Knutson, Kenosha, and Breanna Wolter, Appleton (pictured above.)

The dictionary stemmed from what Terrell called a “funny happenstance” within a Facebook group. Among her online friends was a German woman living in the Netherlands who was working with Ukrainian refugees. She was a linguist who mentioned she was trying to develop a refugee dictionary.

“I said I knew of a computer software program that might help,” said Terrell. She was referring to Boardmaker, a tool often used in communicative sciences and disorders for those unable to speak. It uses images to depict words for non-speakers – images that have been researched and developed specifically to depict objects, actions, documents, locations and more. Non-speakers can use the software to point to the object and communicate. 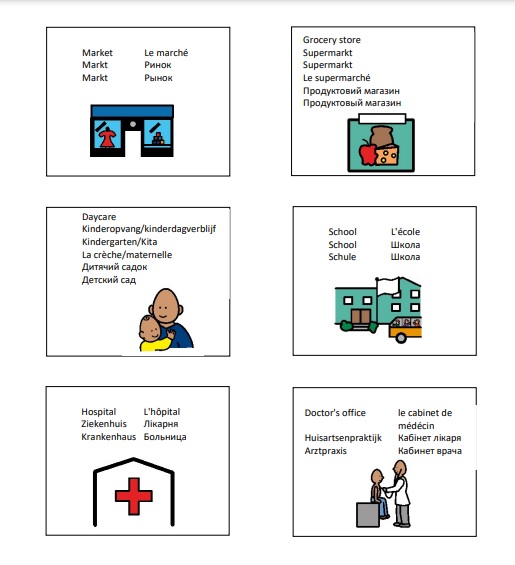 The “Refugee Dictionary” uses common images and translates words into six languages to help refugees and their families communicate in new communities.

Terrell brought the idea to Julia Fischer, head of the CSD program, who thought it would make a great project for their graduate assistants in the clinic.

“I was really interested and intrigued in using Boardmaker that way,” said Wolter, whose primary work was in the Augmentative and Alternative Communication Lab (AAC). “I never thought I’d be using AAC software for that kind of project, so seeing it used more broadly was exciting.”

The German linguist provided the team with words that were needed – those pertaining to families, young children, pregnant women, health, food and other necessities – translated into the six languages. The students entered each word into an Excel sheet and worked with Boardmaker to insert the words into charts with the images.

Knutson and Wolter soon realized that they would need to update the software to recognize Cyrillic characters used in the Ukrainian and Russian languages.

Once completed, the dictionary was sent to Terrell’s online contact and shared with refugee agencies in The Netherlands.

“Whether it helps 500 or 5,000 people, we are spreading awareness of the different ways we can communicate with each other,” said Terrell. “We discovered that we can use these tools for people who have communication barriers unrelated to disabilities as well as for literacy education.”

Wolter and Knutson agreed that this project will benefit their careers as it taught them problem-solving and critical thinking skills.

“While I didn’t have any experience in augmentative communication before, I can see now how I can use it in my career,” said Knutson, who also works in the clinic’s media center. “It was a great experience to help people communicate.”

“I hope to look into doing more specialized work with augmentative and alternate communication in the future,” Wolter said. “I like knowing we can expand its uses to a greater population.”

UW-Stevens Point offers graduate degrees in speech-language pathology and audiology, and a bachelor’s degree in communication sciences. The Speech, Language and Hearing Clinic is a clinical training facility that serves the university and Central Wisconsin area. Learn more here.