University of Wisconsin-Stevens Point senior Sam Knapp has always felt lucky to live in the United States, calling it a place of privilege where clean water and abundant food and energy resources are taken for granted.

The graduating chemistry and physics major hoped to bring that privilege to others around the world by studying environmental engineering in graduate school next fall.

Sometimes plans change – for the better. Rather than preparing for his dream, Knapp will put it into action and spend 10 months working on a project to eradicate Legionnaires’ disease from water supplies in hospitals worldwide.

The winner of a 2014-15 U.S. State Department Fulbright Student Grant, Knapp will travel to Sweden to work with Dr. Bo Nordell at the Luleå University of Technology in Luleå. He is the third UW-Stevens Point student to win the prestigious award since 1973. 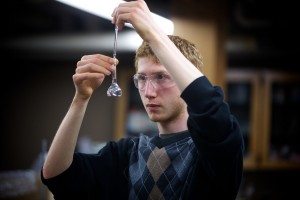 Sam Knapp, a chemistry and physics major and May graduate of UW-Stevens Point, has been awarded a Fulbright Grant. Starting next fall, he will work on research in Sweden that will help eradicate Legionnaire’s disease from water supplies in hospitals and nursing homes worldwide.

“Every day it becomes a little more real,” said the Iron River, Wis., native. “I’m looking forward to the satisfaction of learning something new and professionally moving toward a career in sustainability. I’m also excited for the cultural immersion aspect of it.”

Knapp knew competition for the Fulbright Grant would be tough. About 70 students nationwide competed for 10 positions in Sweden.

“It was an enormous amount of work but totally worth it,” he said. “I had to create and write about my own project, and own it. Applying for the Fulbright makes you evaluate what is really important in your life.”

The Fulbright Grant will support his work at the university as well as provide room and board. He will focus on expanding Nordell’s research, which uses a thermal water disinfection system to kill the legionella bacteria that causes Legionnaires’ disease, a severe form of pneumonia. The bacteria are commonly found in water towers and tanks that are kept at 20-50 degrees Celsius, making hospital and nursing home water supplies a particular concern.

“Nordell is looking to adapt his system with solar heating,” said Knapp. “My job will be to make this work.” Using a solar energy source created by an Algerian scientist, Knapp hopes to create an energy-efficient and low-cost solution for hospitals in developing countries, he said.

In February 2015, Knapp will adapt the system for a hospital in Algeria and hopes to travel there to put the system in place.

In addition to fulfilling his professional goals, studying in Sweden fulfills a more personal dream – discovering the homeland of his great-grandparents. They immigrated to the United States from Luleå in the 1920s. When he began looking for environmental research projects in Sweden, the first response he received just happened to be from a scientist in his family’s hometown. “It must have been fate,” he said. He plans to visit relatives there.

Knapp studied Swedish for two years at UW-Madison before transferring to UW-Stevens Point. He’s practiced the language by reading Swedish newspapers and listening to Swedish radio online. “I can’t wait to finally put my skills to practice on a regular basis.”

Transferring to a smaller university has created more opportunities for research, Knapp said. “When I came to UW-Stevens Point, I found a welcoming atmosphere across campus and faculty who were eager to see you, even if they had just met you once.” He began a research project his first semester with Biology Professor Eric Singsaas.

“Sam exemplified every good quality we want to show the world,” said Singsaas. “Besides his intelligence, Sam is a humble and caring person. He has the capability to see connections between seemingly unrelated things. This is the mark of a true scholar.”

After completing his Fulbright experience, Knapp will go to graduate school. Ultimately, he hopes to work in the research and development of renewably sourced electricity in developing countries, as well as on small-scale clean water projects.

“I always want my work to address both social justice and environmental sustainability,” he said.