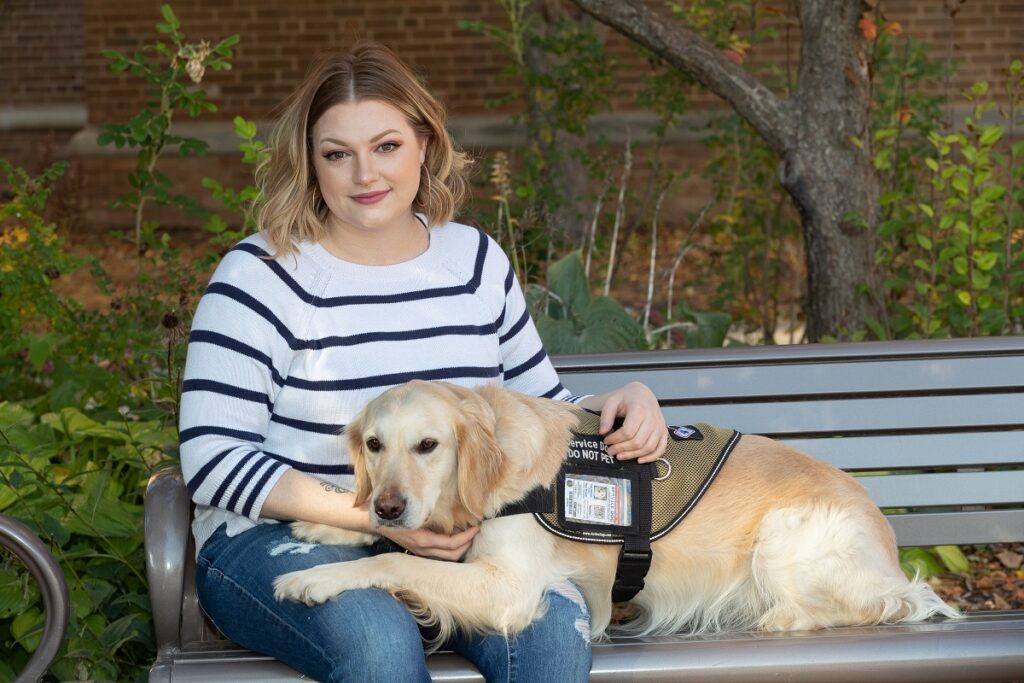 U.S. Navy veteran Randi Miranda joined military service to follow in the footsteps of her “favorite human,” her grandfather, Thomas J. Lawrence. The University of Wisconsin-Stevens Point senior from Abbotsford was inspired by his U.S. Navy service in Vietnam, and that of her Uncle David, a member of the U.S. Army Special Forces, a “Green Beret.”

“Each of them said they would do it again, even though they faced struggles for their service,” she said. Her grandfather was harassed upon his return to the states, and her uncle died of complications from injuries sustained during his service. “They didn’t have regrets. That gives you perspective. That’s why I joined.”

Miranda served four years as a quartermaster (navigator) on the USS Roosevelt. She was stationed in Florida and deployed off the coast of Somalia and also spent time in Spain, Seychelles and Mauritius. The destroyer’s 115 days at sea broke a record, with crew having only 15 days on land over seven months.

“One of the best things in the world was being out on the ship at night,” she recalls, “moving slowly as the waves crash under a clear sky and luminescent algae light up the sea.”

During her time in the Navy and living on base as a military spouse afterward, she realized how those in military service need support for their physical and nutritional health as well as their emotional and social needs. Her interests led her to earn a culinary associate degree.

After moving back to central Wisconsin, she found the dietetics program at UW-Stevens Point and a chance to pursue new goals inspired by her time in the Navy.

“In the military you can get used to energy drinks and fast food, then when you return to civilian life those grab-and-go habits continue, rather than sit-down meals,” she said. “My goal is to help veterans make healthful, intentional food choices.”

At UW-Stevens Point Miranda has found a diverse, well-rounded program that teaches all aspects of dietetics.

“The women in dietetics are so inspirational,” she said, mentioning faculty members Becky Konietzki, Jasia Steinmetz, Deborah Tang and Annie Wetter. “They share their life experiences and are so relatable. Seeing them where they are helps motivate me to get myself to where I want to be.”

“As a non-traditional student, Randi brings real-life experience and perspective into the classroom,” said Wetter. “She understands that life is messy and there is no perfect diet. Given the challenging situations she has experienced, she will naturally empathize with clients and knows well how different areas of wellness interact and impact our ability to make positive change in one area.  That’s true for all of us. We need health practitioners who intuitively see and honor the whole client, not just their diet.”

Miranda’s long-term goal is to open a care facility that focuses on the physical, mental and nutritional health of veterans and their community. Her plan is to locate this near a military base, initially in Florida, then expand to California and Virginia.

“Creating these support programs will benefit the military community as it could reduce costs for long-term care,” she said. “It would allow people access to healthy options in places where there are often food deserts.” Gut health also affects mental health, she added, so this is an opportunity to improve both for military veterans.

Miranda has found her own methods for supporting mental health needs – her service dog, Abbey. The golden retriever accompanies her everywhere she goes. She and Abbey were matched through Patriot K9s of Wisconsin, which trains veterans to train their service dogs and build a personal relationship with them.

Miranda encourages people to give service dogs and their owners the space they need, including not making eye contact, petting the dog or approaching closely, as it can heighten anxiety for both the owner and the dog. She has learned to be firm yet respectful when asked questions about Abbey.

Members of the UW-Stevens Point Veterans Club are also part of her support network. “Being a member helps me feel less alone,” she said. “We have a strong sense of community and quickly connect with each other. You can be yourself with those who have similar experiences.”

Miranda and her fellow veterans on campus will be honored on Nov. 11, at an 11 a.m. ceremony at which she will sing the National Anthem.

“For me, I think of Veterans Day as an opportunity to thank others for their service. I don’t make it about me,” Miranda said. “I think about what my grandfather, my uncle and their generation went through. Veterans Day circles back to why I joined.”