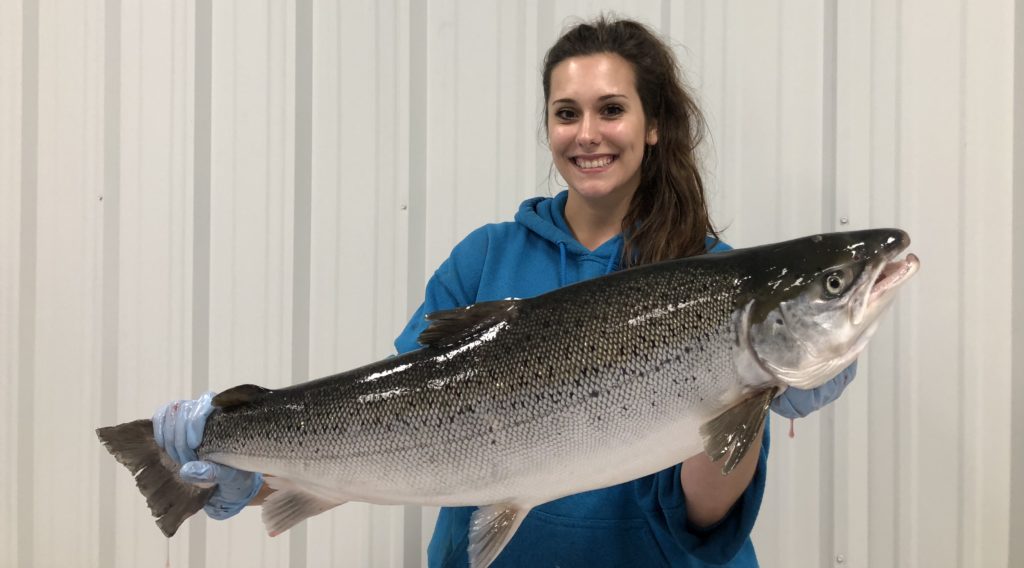 The University of Wisconsin-Stevens Point was selected for one of 22 federal Sea Grant-funded projects totaling $11 million. It is the only university in the Great Lakes region to be part of the 2018 Aquaculture Research Awards.

The Wisconsin project, “Overcoming barriers to support the growth of land-based Atlantic salmon production in the Great Lakes region,” will receive approximately $245,000 in federal funds during its first year. The total budget for the two-year project, including both federal and non-federal matching dollars, is approximately $773,000.

“This funding provides an unmatchable opportunity for UW-Stevens Point and its students to meet the goals of the Sea Grant priority of supporting the development of emerging systems and technologies that will advance aquaculture in the U.S,” said Christopher Hartleb, professor of fisheries biology and director of the NADF and UW-Stevens Point’s Aquaponics Innovation Center in Montello.

Researchers will focus on two key issues that have hampered the continuing growth of the land-based salmon industry in the United States: fish health and fish flavor, said Greg Fischer. He is NADF facility operations manager and will serve as the project’s leader and research team organizer.

James Hurley, director of Wisconsin Sea Grant, will serve as principal investigator for the grant.

Land-based salmon aquaculture is growing quickly in North America, Fischer noted. “This research study is exciting because it is really going to help the industry. We are working closely with private partners doing this type of aquaculture.”

A robust collaborative effort is underway with partners Superior Fresh, based in Hixton, Wis. (southeast of Eau Claire), and Riverence/Evaqua Farms, sister companies based in Washington State and Idaho.

Superior Fresh is the largest Atlantic salmon aquaponics facility in the world. Research will be conducted there as well as at NADF. Superior Fresh will provide fish at various life stages to accommodate the research needs of the project. Riverence/Evaqua, also a large, sustainability-focused player in the salmon and trout industry, will supply salmon eggs needed for the research.

Both private partners are providing guidance during the project through their Atlantic salmon experts.  They will be involved in scientific publications at the end of the project.

NADF is widely recognized as a national leader in aquaculture research and recirculation aquaculture system research with cold and cool water fish species. UW-Stevens Point undergraduate students and graduates of its aquaculture program will assist scientists on location during the project.

Also participating is another prominent research entity, The Conservation Fund Freshwater Institute, based in Virginia.

The fish health issue the research team will address involves managing a commonly occurring fungus (saprolegnia) that occurs in both farmed and wild fish.

“Various Atlantic salmon life stages are particularly vulnerable to infection, including early rearing – the fry stage — when salmon physiologically prepare for the transition from freshwater to seawater,” said Chris Good, a fish veterinarian with The Freshwater Institute.  “We aim to investigate novel approaches to prevent or reduce the impact of fungus at both of these life stages to ensure the health and welfare of farmed fish.”

Regarding flavor, for consumers to choose farmed fish it must have a “flawless” flavor profile. “This project will help to ensure that Atlantic salmon harvested have the very best flavor profile: succulent, buttery-rich and mild,” said Steven Summerfelt, chief science officer of Superior Fresh.

The work of the public-private research team will benefit the aquaculture industry well beyond Wisconsin, Fischer said.

More than 90 percent of the fish Americans consume is imported. The national trade deficit in this sector has swelled to more than $14 billion annually, according to Sea Grant. A solution is to support domestic aquaculture, or fish and seafood farming.

Farming fish closer to where food shoppers and restaurants buy it has several benefits, including greater freshness, a smaller carbon footprint (because the product does not have to travel via air) and job creation in these communities. At Superior Fresh, leafy greens are grown along with salmon using aquaponics, an efficient, sustainable system that recycles nearly all the water and nutrient flow.

The national office of Sea Grant, housed at the National Oceanic and Atmospheric Administration, supports numerous projects to advance the development of a sustainable aquaculture industry in the United States.