It’s a common paradox for college graduates – getting a job requires experience, but how do you get experience without a job? Thanks to a partnership with Skyward, Inc., students at the University of Wisconsin-Stevens Point are gaining both.

An educational software company based in Stevens Point, Skyward currently employs more than 400 people, 145 of which are UW-Stevens Point alumni. But while Skyward has long recruited interns from computer information systems, it recently began collaborating with the School of Business and Economics to offer students paid internships in customer service.

Based on their intern experience, most of the 13 students in this program continued with the company on a full-time basis after graduation.

“The ability to bring in students, train them and have them stay on full-time has been a very valuable pipeline for us,” said Jon Oliver, vice president of operations at Skyward. “Some internships last a few weeks. Here it is a year-round position, which helps fund their education. It also builds into a career.”

Ben Abbott, a business administration and economics major from Stevens Point, was one of five December graduates who accepted a full-time job after interning for more than a year. These five students had the experience of having their new boss, Skyward CEO Cliff King, as their commencement speaker. 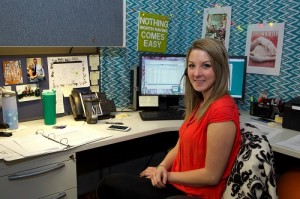 Recent graduate Jessie Fecteau gained the experience she needed for her career at Skyward with a paid internship at the company part-time during the school year and full-time during the summer.

“Skyward is truly a family-run business,” said Abbott. “Everyone is incredibly knowledgeable and brings different dynamics and fresh ideas to the table. It’s an exciting place to work.”

The relationship between Skyward and the School of Business and Economics began as a personal one. As a member of the school’s Business Advisory Committee, King worked closely with faculty and saw the potential to increase the company’s internship program with UW-Stevens Point beyond information technology majors.

King worked with Business Professor Barb Mihm to promote the customer service positions. Several students majoring in business administration were hired. The students worked part time during the school year and full time during the summer, and had the opportunity to travel with the company to train customers in Michigan.

“I strongly recommend the internship experience at Skyward,” said Jessie Fecteau, a business administration-marketing and economics major from Richfield, Wis. “It’s a small company, and you can get the experience you need without feeling intimidated.”

“As part of the program, the interns did presentations on their Skyward internships to their peers in School of Business and Economics,” Mihm said. “It was clear the experience gave them respect and confidence. It was a real sales pitch for Skyward, and we have a lot more students interested in the internships.”

That’s great news for Andy Lind, vice president of customer service at Skyward, who plans to hire about 10 interns next fall with the intention that these interns also will continue with the company.

“We have been impressed with what we have seen coming from UW-Stevens Point,” Lind said. “They come here in learning mode, with a good background and good working knowledge to start.”

An alumnus himself, Lind helps interns see the opportunity for a career in Stevens Point.

“Many people feel the need to go to a big city, but there’s career growth right here,” he said. “We promote people from within the company, and within five years we are looking to double in size. I’m sure we’ll continue to hire UW-Stevens Point graduates.” 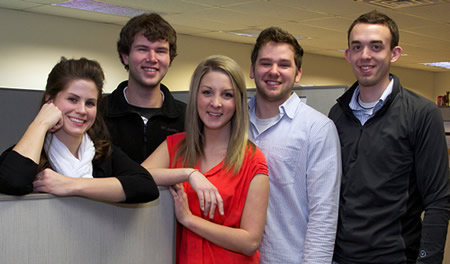