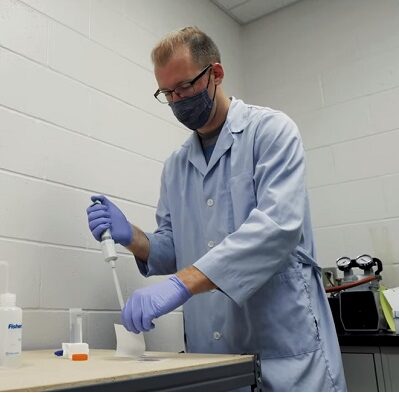 Alex Thomas, a graduate assistant at UW-Stevens Point, is working on his graduate thesis through the CWD composting project.

One of the challenges in dealing with chronic wasting disease, a fatal brain infection in deer, elk, moose, reindeer and caribou, is the disposal of infected animals.

A team of researchers from the University of Wisconsin-Stevens Point, UW Madison, Michigan State University and the Wisconsin and Michigan Departments of Natural Resources is working to find a less expensive and more sustainable solution through composting.

“The goal of this research is a very practical, quick and safe way to dispose of the large amount of CWD-infected deer generated not only in Wisconsin and Michigan but across the Midwest,” said Professor Robert Michitsch, soil and waste resources. “If successful, this composting method captures the infection, destroys it and reduces the large volume of biomass that needs to be treated.”

According to the Wisconsin Department of Natural Resources, CWD infected deer were found in 24 Wisconsin counties during the last sampling from April 2019 to March 2020, with a total of 1,578 infected deer from the 18,899 analyzed. This number is up from the 1,338 found last year from 19,367 samples. Most of the infected deer came from the southwest portion of the state.

Currently, incineration or landfills are the preferred disposal of infected deer, but the cost of transportation and lining the landfill space with clay to stop the spread of infection is not efficient or economical. 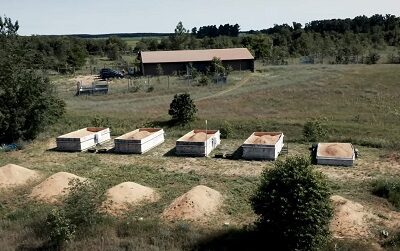 Five compost bins are being used in the CWD composting research in Central Wisconsin.

The composting research began in early 2019 when the DNR approached Michitsch, who had been researching the use of composting for slaughterhouse waste. With the assistance of then undergraduate student Susanna Baker, the first composting trials began in the fall of 2019.

Five above-ground, wooden composting bins, 16 feet long by 8 feet wide and 2-4 feet high, were built at a quarantined site in central Wisconsin where there is no public access, said Michitsch. Every researcher at the site also uses biohazard suits, respirators and other protective equipment when dealing with infectious materials.

Over four to six months, the infected deer carcasses were composted in four of the bins with layers of gravel, soil and sawdust in a process called “biopiling” to mimic the natural environment. The fifth biopile without CWD material acted as a control. At the end of the allotted time, the soil, sawdust and carcasses were tested for the mutated proteins, or prions, that cause CWD.

While the first trial did not hit the temperature parameters needed, researchers did find some spots without detected infectious material, Michitsch said. Planning for a second trial began in fall of 2020 with the assistance of graduate research assistant Alex Thomas.

A 2017 UW-Stevens Point waste resources graduate, Thomas was excited to return to campus to work on his graduate thesis for the project. The Appleton native had been working with AmeriCorps in eastern Washington state.

“It’s been wonderful to come back to Wisconsin and work with my mentors again,” said Thomas. “It is awesome to be involved in such a high-profile project and give back to the DNR and outdoor recreation. If we can make a difference for the state, it will be worth our efforts.”

With this fall’s warmer weather, the second trial will be completed in the next few weeks, and then the soil, sawdust and carcasses will be tested again. “There is still much more work that can be done,” said Michitsch. The work will take them into spring 2022.

While the long-term future of the project is unknown, Michitsch hopes to gain funding to create permanent composting bins for continued trials.

As deer hunting season continues, hunters should be on the lookout for deer that may be suffering from CWD. Infected deer may have no fear of humans, noticeable weakness, set patterns of walking, loss of coordination, drooping heads and ears and severe emaciation. To learn more about CWD, including how to test harvested deer, go to dnr.wisconsin.gov.

“Deer hunting is an important aspect of Wisconsin culture, so we should care for and manage deer populations as best we can,” said Thomas. “Managing and mitigating the spread of CWD helps the state have a viable deer population and viable hunting going forward.” 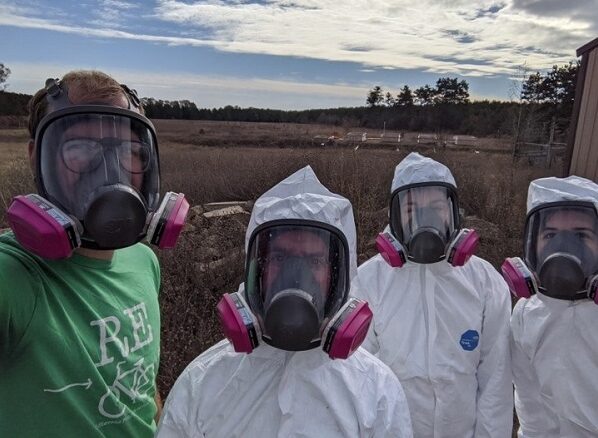 With the compost bins in the distance, UW-Stevens Point researchers Alex Thomas, Professor Rob Michitsch, Amber Smith, and Susanne Baker prepare to work on research on the effects of composting on CWD-infected deer.