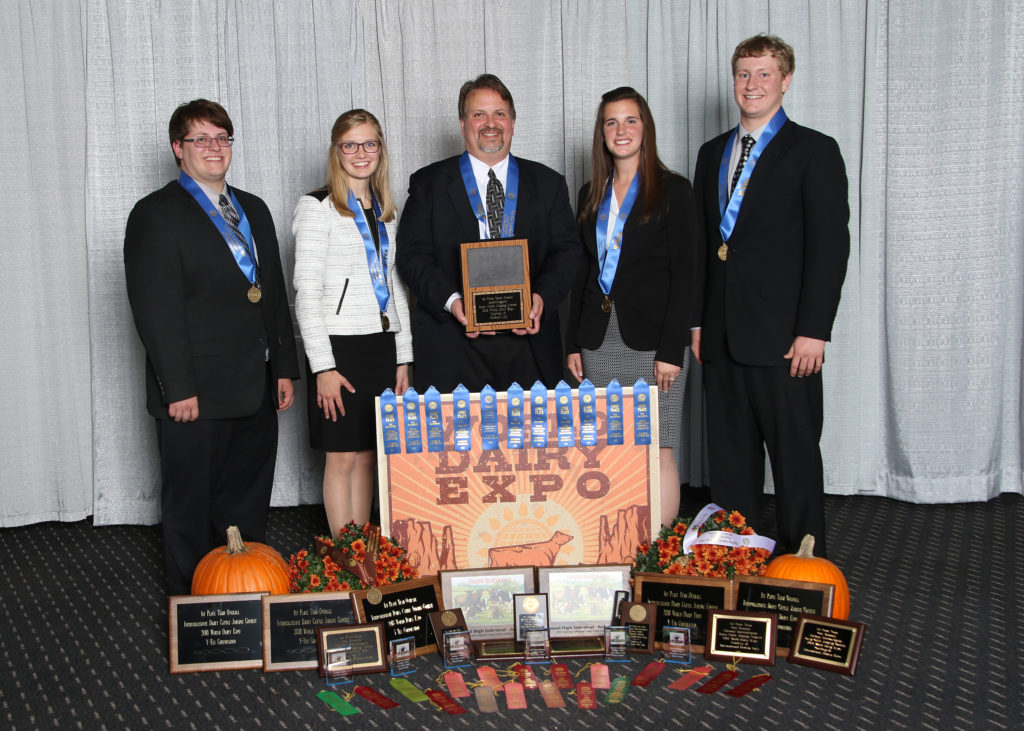 “I am so proud of the team we have become and all of our accomplishments,” said Helmer. “My teammates have become some of my closest friends. Considering all my years of judging and experience, there couldn’t have been a better way to end it.”

“Winning at Dairy Expo is something I thought I could only dream about when I was younger,” said Kramer. “I am thankful for Dr. Kelm and Mary Holle for all of their time preparing us for this contest.”

Tauchen, too, thought back to her youth.

“Dairy judging … is a passion we’ve been chasing since a very young age. To have so many people [coaches and families] dedicated to helping us pursue this dream is truly humbling,” she said.

Irrthum has been in the spotlight before. He was a member of the Minnesota 4-H team that took top honors in the National 4-H Dairy Judging Contest at Expo two years ago.

“They were both extremely fun and both were really close margins. I guess I’ve just been lucky to be part of two really great teams!” he said.

Kelm summed up his reaction to the top finish and reflected on his many years of coaching teams.

“What an absolute thrill to hear UW-River Falls announced as the contest winner!” Kelm said. “I have had the honor to work with so many great students over the years. It is a real honor to work with this year’s group of seniors, good judges and even better people.”

In a remarkable coincidence, emeritus Professor Perry Clark was on hand for the awards presentation as he was accompanying a group of students from AERES University (Netherlands) who were in the U.S. as part of an exchange agreement with UW-River Falls. Clark was the coach of the 1995 UWRF Dairy Judging Team, the last UWRF team to take top honors at World Dairy Expo. He spent time at the expo tracking down the four team members from 1995. He successfully reconnected with all four, each was working or showing cattle at the show. The 1995 team consisted of Jenny Berg, Reid Stransky, Kelli Tuman and Rebecca Walker.