UW-Platteville students to present research at Posters on the Hill 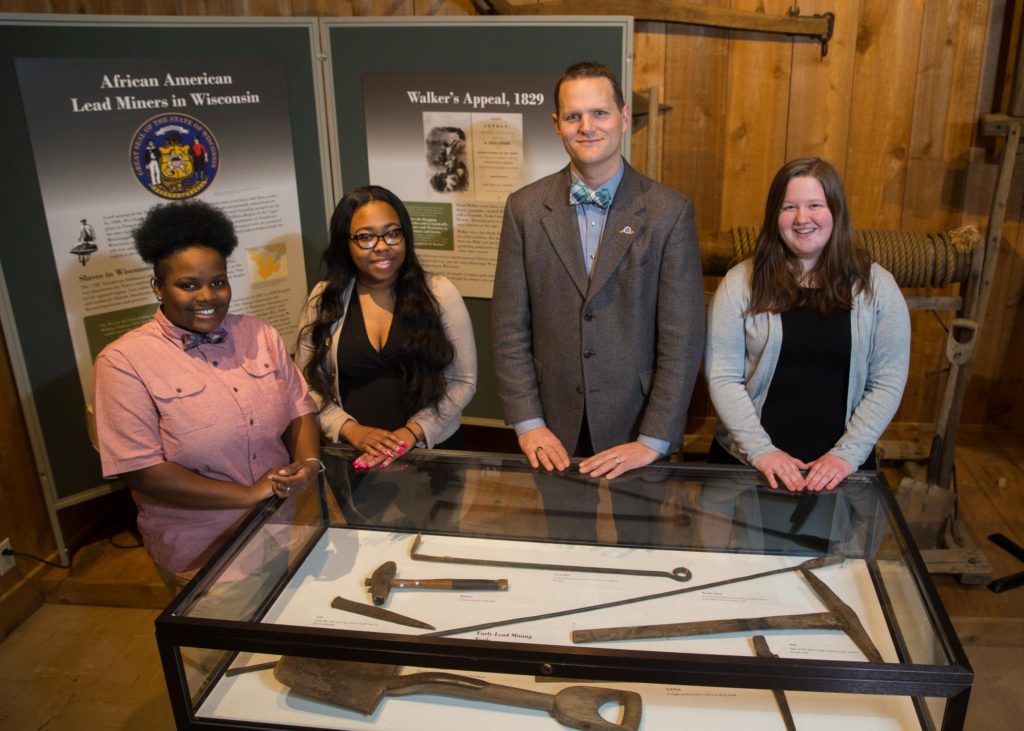 Three students and two recent graduates from the University of Wisconsin-Platteville will present research they conducted last spring on the vital contributions of African American lead miners in Wisconsin at the Council on Undergraduate Research’s 22nd annual Posters on the Hill event to be held in Washington, D.C. April 17-18.

The project was one of 60 top student research projects selected from more than 400 applications. This is the first time UW-Platteville will be represented at the event. 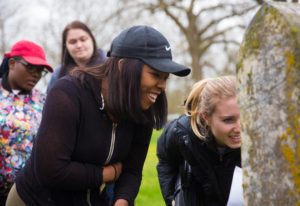 According to the Council on Undergraduate Research website, the competitive event “gives students the opportunity to showcase their research to congressional members, meet with their representatives, and learn about advocacy for undergraduate research.” 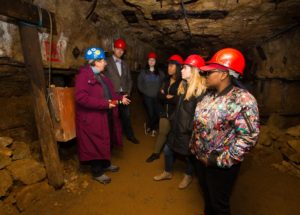 Student researchers were enrolled in Individual Research in History: African American Lead Miners, 1829-1890, taught by Dr. Eugene Tesdahl, assistant professor of history at UW-Platteville, who will accompany the group to Washington, D.C. The aim of the course was to offer students hands-on education, meet the needs of the Platteville community and demonstrate the core of the Wisconsin Idea: bringing information to the people of the state.

Throughout the spring of 2017, Redfearn, Roberson, Rand, Larrison and Kosobucki conducted hands-on, archival research in the university’s Southwest Wisconsin Room. They examined hundreds of archival manuscript documents, including manumission papers, the documents that freed enslaved individuals. They discovered that dozens of free and enslaved African Americans were among those mining for and refining lead in the Driftless Region between 1827 and 1890, and were a vital part of Wisconsin’s origins. 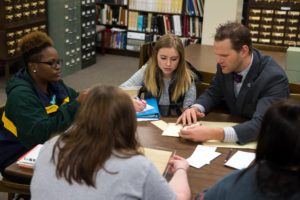 In addition to conducting research in the archives, they also conducted research in the field. In April, they visited the 1845 Bevans Lead Mine in Platteville, which gave them a greater appreciation of the daily routines of 19th century miners. They also visited the grave of James D. Williams at Carmel Cemetery near Mineral Point, Wisconsin, where they made a rubbing of the 1903 headstone.

“Accompanying five undergraduate students to present their research in the United States Capitol is a humbling honor,” said Tesdahl. “Deja, Liz, Simone, Tori and Winnie applied for, and earned, this distinction themselves, finishing at the top of the field at an event usually dominated by research in STEM fields. I am very proud of these five Pioneers.”

Dr. Melissa Gormley, interim dean of the College of Liberal Arts and Education at UW-Platteville, said that Tesdahl is an exemplary model of a teacher/scholar.

“Dr. Tesdahl’s ability to interest and inspire students to participate in undergraduate research is exceptional,” said Gormley. “I am incredibly impressed with the level of research that the students conducted. I am also impressed that they applied for the opportunity to present their research at the national level. Their research on the contributions of African American lead miners in Wisconsin was needed. It will add to our understanding of the complexities of our regional identity, and makes clearer links between African American history and United States history as a whole.”

“This is a huge national honor for these five students,” said Will Hoyer, interim director of the Office of Research and Sponsored Programs at UW-Platteville. “They, like many Pioneers, demonstrate that learning does not just happen in the classroom through lectures, discussions and preparing for exams but also through independent research and activity in labs, archives, practice rooms and out in the field.”

When Rand was informed that their research was chosen, she felt excited and proud of herself and her team.

“Our research is important because it tests Wisconsin history that is normally taught in school systems,” said Rand. “Lead mining was a major part of the establishment of Wisconsin, so knowing that enslaved and freed African Americans contributed to it is very important. I want to share this with others because it is important for people to understand that there is more diversity in United States history than what is discussed in society. The best way to deal with ignorance is to educate and I feel that is what we are doing.”

Kosobucki said that she was extremely honored when she discovered their research was selected for Posters on the Hill.

“I am excited that the selection committee saw value in our research, and that there are others that desire to learn from our research,” said Kosobucki. “I enjoyed sharing the new findings with my tour groups when I was a tour guide in the Bevans Lead Mine. It is crucial to share the research with others because lead mining is an enormous part of Wisconsin history and Wisconsin miners’ contributions affected our nation’s history. It is important to show others the different individuals who played an immense role in lead mining, because some contributions, especially by the African American community, have been overlooked for so long.”

Roberson said conducting the research was important for her personally.

“As an African American, the discovery of the important contributions that African American lead miners had made gave me a sense of identity,” said Roberson. “Like many people, I knew that slavery existed in the south, but I didn’t realize that it existed in the north too. It is so important for us to learn about the people who came before us, who they were and the contributions they made. If we don’t, it remains hidden. Our research helped reveal an important aspect of our state’s history.”

Larrison said that after working so hard and talking about the possibility of their project being accepted for so long, it was wonderful to see it become a reality.

“The African American lead miners’ stories had been forgotten or swept aside,” said Larrison. “Through our research, we were able to give them their voices back in order to tell their stories over 150 years later. It is important to share our research with others because our topic is about something that a lot of people do not think about, or do not want to think about, in the region. A lot of people do not think slavery touched northern territories such as Wisconsin, but people like Paul Jones and America Jenkins would disagree entirely.”

“I am so incredibly happy that our research team will present its research in the U.S. Capitol,” said Redfearn. “The research is important to me because I get to help tell the stories of those who were never permitted to tell them. We need to share this research with others because lead mining is so pertinent to Wisconsin’s history, and more people should acknowledge that free and enslaved African Americans made vital contributions in lead mining and the economic lead boom in the Driftless Region.”

Following the completion of their research, students worked with Mining and Rollo Jamison Museums staff members to create a permanent exhibit on African American lead miners, slavery, freedom and bigotry in the Driftless Region during the 19th century at the museums.

The group’s research project, presentations in La Crosse and Mineral Point and trip to Washington, D.C. were made possible with the support of community partnerships that made it a reality: