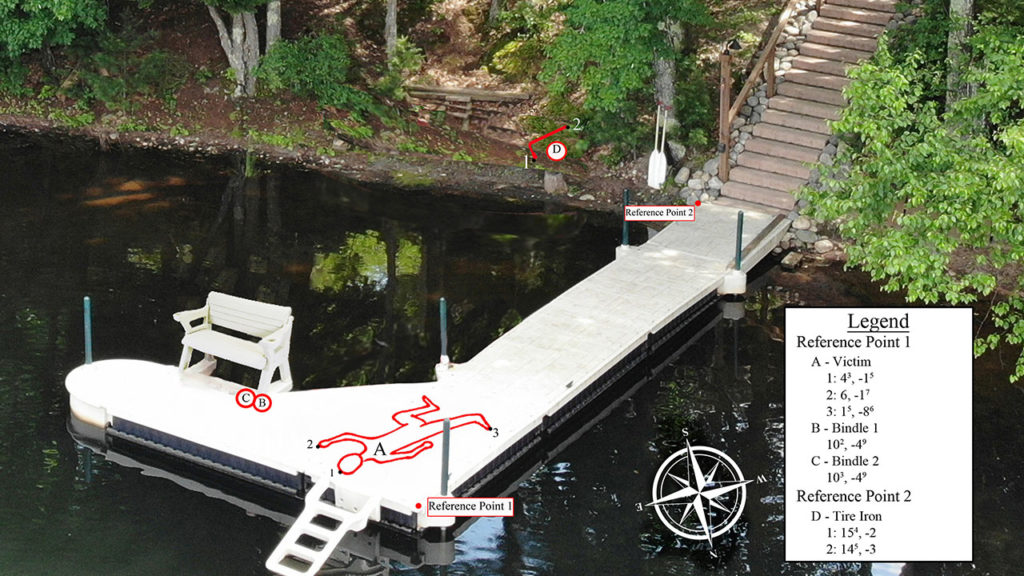 During the COVID-19 crisis, University of Wisconsin-Platteville faculty and staff have risen to the challenge by adapting and designing novel ways of realigning course delivery to ensure students continue to receive an outstanding, rigorous education, including hands-on learning experiences.

One instructor who developed an innovative way is Dan Román, lecturer of forensic investigation at UW-Platteville, who modified his spring Crime Scene Diagramming course. According to Román, the course is designed to develop a skill set that is in demand, more and more, in today’s world of crime scene analysis and reconstruction.

“The Crime Scene Diagramming course has slowly gone from a paper and pencil artform to an exciting digital presentation format that now allows for integration of digital maps and images, integration of digitized photographs, images and video captured by drone cameras, and, albeit with still highly expensive equipment, the possibility of creating three-dimensional digital crime scene depictions that can be viewed from various angles,” he said.

Before the COVID-19 crisis hit, Román’s original plan was for students to go to various “crime scenes” he would prepare around campus, both indoors and outdoors, where they would have to find the evidence, document it and then measure it into place.

“They would have to identify a reference point from which everything would be measured, a chart of coordinates for each item of evidence, and other pertinent information for their sketch,” he said. “This would allow for diagrams of parking lots, open spaces between buildings, plotting in trees, structures, etc., to better simulate the real world of crime scenes.”

Other assignments included looking at internet files of historical crime scenes and the associated diagrams, and then looking at those same areas today, via Google Maps, to see how the areas have changed.

“These assignments would reinforce the need for diagrams because those scenes can change or totally disappear over time, and the diagram is the only scaled representation of that scene,” he said.

When the COVID-19 global pandemic hit, however, it quickly changed the way that Román could deliver the course.

“For me, it was a scramble to figure out a way to get the hands-on portion, including the teamwork aspect, to work with students scattered throughout the tri-state area,” he said.

After careful consideration about how he could best modify the course to meet students’ needs in the new environment, Román decided to start the spring semester by having the 28 students in the course draw a field sketch of their residence hall room or bedroom and then measure it with a piece of string as their only unit of measure. The string was approximately a cubit, or the distance from the elbow to the tip of the index finger. They then had to determine the smaller units by folding the string into halves, quarters, etc. in order to allow for smaller distances.

“There were two purposes to this activity: to understand that, without standardized measurement systems – developed over time and by various cultures – there would be no way to enter into the world of scientific discovery, and, secondly, that all measurements are ultimately approximations,” said Román. “From this last point, students learned that all of their diagrams, regardless of their accuracy in measurement, could only ever be approximations.”

With the assistance of the university’s Information Technology Services, Román also secured access – through the computer lab in the university’s Russell Hall – to a Microsoft software program called Visio, used for creating not only flow charts and computer diagrams, but also architectural floor diagrams drawn to a variety of scales. Students were taught how to redo their field sketches by re-drawing them in Visio, dragging and dropping walls, doors, windows, furniture and appliances, plants, trees, cars, etc., into their sketches.

Another feature Visio allows is to import other files into the drawings, so Román taught students how to utilize Google Maps in a default format to capture a birds-eye view of their residence hall, the complex in front of Russell Hall, the street in front of their home, etc. and then capture that image and drop it into Visio.

“Thus, they could re-create an outdoor crime scene without having to draw it from scratch, something that I once had to do,” he explained. “The students then created the image, went out to the ‘real’ area and measured it, and dropped those measurements into their Visio diagrams to show distances and sizes, angles, etc. The time savings was an enormous benefit of this technique. These diagrams were outstanding examples of ingenuity of ideas and application of lessons learned in the class.”

Román has received positive feedback from students regarding the adapted course.

“It is easier and less stressful to learn to rely on myself –  like being the only officer on the job and being responsible for all of the work at the crime scene,” said Bennett Applegate, a senior forensic investigation major with a criminal justice minor from Barneveld, Wisconsin.

“I can be at home in a less stressful environment – an environment that I know – for my diagrams,” said Brittany Jobgen, a junior forensic investigation major with a criminal justice minor from Montgomery, Illinois. Jobgen has already used her sketching skills to help her younger sister redesign her bedroom by doing it on paper instead of moving furniture around the room.

Román noted that the modified delivery of this course has posed additional challenges and rewards.

“It has been a challenge for all of us to find ways to make things work, and just when we think that we solved one problem a different one pops up that makes us step back to the drawing board,” he said. “Drawbacks are a mixed bag, some purely technical, like reduced internet speeds due to heavy usage of the web, or limited availability due to some students living in rural communities with restricted internet access. I live in a rural community outside of Madison, and I rely on a rural internet provider that transmits by radio wave to my home. Some of my students do not have computers and need to share with other family members who are also being taught via internet.”

He noted that stress is a factor that was underestimated.

“Students are with their families, and they worry about family income, illness within the family, infections, etc.,” he said. “One student has a parent working as a nurse with Covid-19 patients, creating an immediate stress level within the home. In families, they may have younger siblings at home that are also using the internet and often sharing the same computer calling for some hectic scheduling time, and the parents may be working from home as well.”

Some portions of Román’s class will be cut by necessity. One was a planned visit from the Wisconsin State Patrol Crash Reconstruction Unit to show their 3-D “Total Station” Scanning System, which generates millions of data points, storing them so that they can be extracted during processing to create a diagram of a large scene. The other was a planned demonstration of a drone with a camera to take overhead images of a crime scene. The class would have placed marker on the ground at fixed distances and used that as a means of creating an overhead scaled diagram. Román hopes to conduct both activities in the future, if possible.

Román said that, despite its challenges, the alternative delivery has also had its rewards.

“While some students have a new appreciation of the technology that the university provided, because they don’t have the same technology at home, others feel more comfortable at home, finding it easier to focus and to be alone at home,” he said. “Having access to Zoom has been a true relief, and the university is to be greatly applauded for providing that service. It has allowed me to stay in touch visually with my students and to address questions in a real-time format. And for those students who are working to help their now unemployed parents, I can record my classroom sessions and they can watch as they have time.”

Román said another reward is that the class has been able to discuss issues about diagrams and obstacles in the real world, like weather and darkness, etc., and then come up with solutions to those challenges.

“Having already developed the skills at using Google Maps as a digital resource, I can now make assignments for students who are within walking distance of their homes so they can create a simulated crimes scene,” he said. I can then assign specific features that they must incorporate into their diagrams.”

“This process has made better instructors of all of us, nudging us out of our comfort zones,” said Román. “UW-Platteville administration has done a great job supporting staff with technology, and by allowing flexibility in delivery methods. It is nice to work at a smaller campus that is immediately responsive to a situation that is constantly in flux.”

Román worked in a variety of areas until 1984, when he was hired by the City of Madison Police Department. He worked as a patrol officer, then three years undercover in the Narcotics Unit, and then back to patrol. In 1992, he was promoted to Special Investigator (“CSI”) and remained there until his retirement in 2018. Román, who is bilingual, taught Spanish language classes at both UW-Madison and at Madison Technical College. He also designed a “Spanish for Cops” pocket guide used by Madison Police.