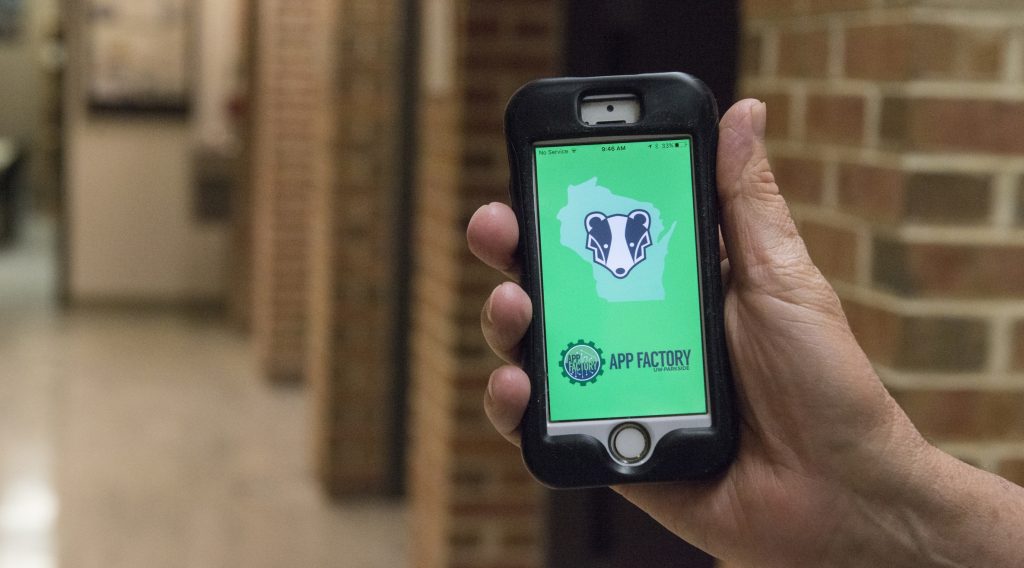 Emergency managers from across southeastern Wisconsin were on hand April 12 at the University of Wisconsin-Parkside for the debut of a mobile app designed to speed the process of gathering and sharing emergency information.

“If an emergency happens in a county you are following, the emergency manager can push out a notification that will show up on your phone the same way you get a text message,” Riley said.

Alerts could be anything from emergency weather notifications to road closings. A “report damage” function allows users to report damage to a local emergency management office.

Peter Jensen, assistant team leader for Southeastern Wisconsin Incident Management, said emergency managers have traditionally been challenged collecting information and understanding the exact location of the damage following any sort of emergency. “That information is used not only to help direct local emergency responders,” Jensen said, “but to help justify disaster declaration. The old way of doing things is basically going out in your car and driving around looking for the damage.”

Jensen said he expects Ready Badger to simplify and speed the process of applying for disaster aid or submitting a FEMA request if the emergency warrants that action.

Getting the Word Out

Now that the app is available for Android and iOS devices at no charge from Google Play and the App Store, the next step is raising awareness. “I hand out a lot of information,” said Donna Haugom, director of emergency management for Jefferson County. “There are probably a thousand people I can reach out to and identify what this app is and explain how to use it.”

“Emergency management directors in southeastern Wisconsin found that other apps really did not meet the needs of the local government,” Jensen said. “Some apps may have replicated information that was available from other sources such as the National Weather Service. This app goes beyond by establishing the capability of people sending information directly to the emergency management office. 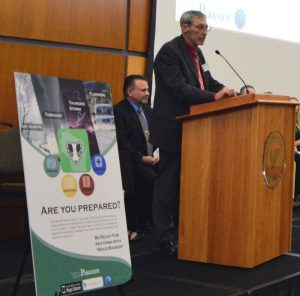 Jensen noted that without the UW-Parkside App Factory, the emergency management community would not have been able to afford development and ongoing support of Ready Badger. “The beauty of the collaboration,” Jensen said, “is the reward of seeing the students in the beginning, and now. When they came in, they were students, they were taking a class. Now they are prepared to go out into the real world … they’ve received a real-life experience.”

In 2014, Riley and Timothy Knautz, a senior lecturer in the UW-Parkside Computer Science Department, discovered a need for a campus group that could support software development projects beyond the classroom. The two approached UW-Parkside leadership with an idea that involved students and faculty across academic disciplines. Administration responded with space and seed funding to support paid interns. In the summer of 2014, the App Factory was officially in business.

Later that year, Riley had a discussion with Jensen about how emergency managers could better communicate to the public. In January 2015, Riley and Jensen began working out the details for what would become the Ready Badger app.

Riley compiled a team of 15 students to develop a one-stop shop for emergency information, including weather alerts and traffic updates. According to Richard Busarow, a student iOS developer in the App Factory, the strength of Ready Badger is that it provides all of the information in one app that people would normally need two or three apps to obtain.

Students from Riley’s Computer Science 476 Software Engineering Principles and Practice II class created the app, along with students from his previous classes who were working in App Factory. According to Busarow and fellow iOS developer Rhiannon Weiss, Riley required that the students spend six hours a week outside of class on app development to earn an A for the semester. Busarow said he put in roughly 22 hours per week. 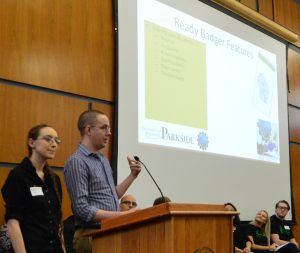 “Since I am graduating in May and looking for a job as an iOS developer, it is very, very important that I have experience, and have (apps) on the App Store already,” Busarow said. “This project gave me both of these things.”

Weiss, a computer science major who will be graduating in December, encourages other computer science students to get involved with the App Factory. Even though tight deadlines can mean long hours in the lab, Weiss said her experience taught her valuable lessons about software development.

Tight deadlines also teach students how to work smarter. “When working with multiple platforms, it is important to coordinate what each group is doing so that we do not have to make so many major adjustments to our work,” Busarow added.

Before the start of the spring 2016 semester, Riley met with Dr. Fay Akindes, director of Community Based Learning at UW-Parkside. Akindes suggested the App Factory pair with Dr. Adrienne Viramontes’ Communication 480 Practicum in Organizational Communication class.

The purpose of the course is to give students a real-world experience in order to apply communication concepts discussed in previous semesters to an actual situation. In the past, the class has done other Community Based Learning projects with partners such as the Hospice Alliance of Kenosha. This was the first semester that the communication class paired with the App Factory. “I would welcome the opportunity to work with the App Factory again, and I sense that we will,” Viramontes said.

Similar to establishing the App Factory, the Communication 480 class formed the Parkside Communication Consultants (PCC). Working in teams and individually, students used their organizational and event-planning knowledge, and performed public opinion research and statistical analysis to create the media event and a media campaign for Ready Badger.

“I was excited to learn about our partnership with the App Factory,” said senior communication major Alissa Pulda, a student in Viramontes’ class. “We learned how to work as a team and it gave me real-world experience in creating a media campaign.” Pulda created several documents for the campaign such as the press release, the research report, and the invitations for the press conference.

Kelsey Krimmer, another senior communication major, said that the experience gave her a sense of personal responsibility. Although the project was a “team effort,” each student had a part that needed to be completed to deliver a finished product. Krimmer was given the responsibility of contacting Riley with any questions the communication class had and setting up any necessary meetings with him and his students throughout the semester. In addition, Krimmer sent out invitations, press releases, as well as follow-ups to invitees. At the media event itself, Krimmer and fellow communication major Kyle Taylor spoke to all attendees on behalf of Viramontes’ class.