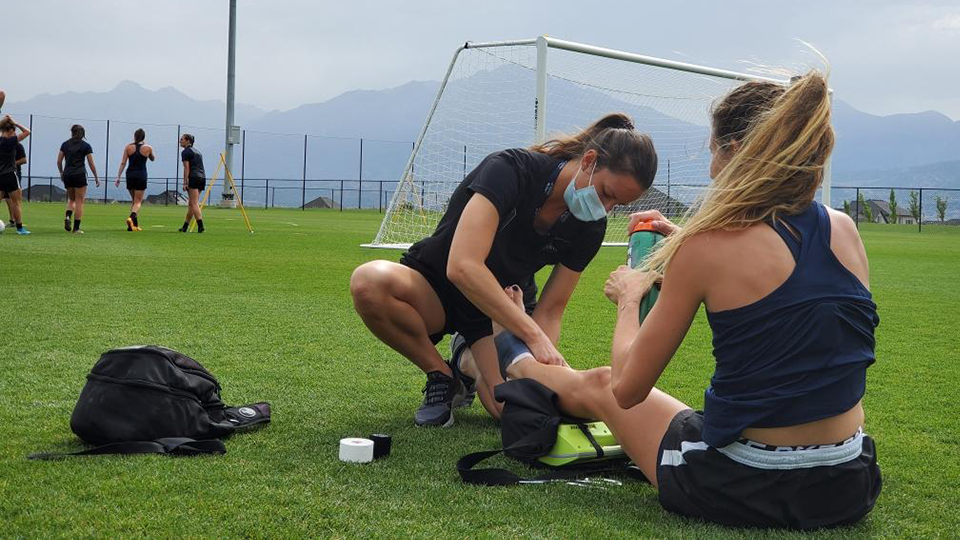 As an athletic trainer, you need to be prepared for the unexpected. You need a kit perfectly prepped to treat an in-game injury, a rehabilitation plan built to use others’ equipment while on the road and a care plan for a spectrum of players ranging from rookie to veteran.

National Women’s Soccer League (NWSL) athletic trainer and University of Wisconsin Oshkosh alumna Lindsey Toman ’06, has perfectly prepared for the unexpected during her 12-year career. But what she, and many others, hadn’t prepared for was a global pandemic.

After shadowing her high school athletic trainer from sophomore to senior year, Toman knew she wanted to study to become an athletic trainer in college. She also knew UW Oshkosh was the perfect place for it.

“I entered college knowing I wanted to be an athletic trainer,” Toman said. “I briefly looked at UW-La Crosse before committing to UWO’s Athletic Training Education Program (ATEP).”

Toman arrived on campus in 2002 and fully immersed herself in the program.

She was required to have a wide variety of experiences working with high school and college athletes and doing rotations with a doctor, physical therapist, athletic trainer and an exercise physiologist.

Many years later, she is still thankful for the well-rounded experiences.

“The professors at UWO were very influential in exposing me to the real job,” Toman said. “We talked to players, parents, other medical professionals who were caring for that player, we gave coaches injury updates and restrictions. I really felt independent by my senior year and felt prepared for both my Athletic Training Board Certification Examination and my career.”

After graduating with her athletic training degree, Toman went on to earn a master’ degree in clinical exercise physiology/cardio rehabilitation while a graduate assistant athletic trainer for the women’s ice hockey team at Minnesota State University Mankato.

Getting back on the pitch

Toman and the back-to-back NWSL Champion NC Courage were a month out from playing their first game of the 2020 season when the coronavirus halted nearly everything in the United States.

During the long stay-at-home order, the NWSL and its subsequent teams started to formulate a plan to have a shortened season, dubbed the 2020 Challenge Cup.

A lot needed to be decided and guidelines set, all while Toman continued to work from home.

“My days were filled with daily COVID-19 screening on 35 players, many Zoom meetings and conference calls,” Toman said. “I had several rehabilitation programs to write and videos to send players to do at home.”

Luckily at the professional level, players know what is needed to be prepared and ready for a season.

“As a professional player you are responsible to be ready; be fit, come to training fueled and fresh and with good sleep patterns,” she said. “The veterans know what to do. The rookies are the ones I speak to more about seeking care early and doing self-care warm-up and cool-down, rehabilitation and treatment.”

The NWSL was the first professional team to start back up. The eight-team league set up a “bubble” in Herriman, Utah, and played a 23-game tournament, with the first game on June 27 between the Courage and Portland Thorns FC.

“The NWSL has phenomenal athletes, Olympians and World Cup Champions on all the teams,” Toman said. “The league has great talent to show off.”

The NC Courage won all four of its opening round games but, after defeating the Portland Thorns 2-1 in its June 27 match-up, dropped a tough 1-0 decision to the Thorns in the quarterfinals on July 17 to get knocked out of the tournament.

Despite the setback to the Thorns, Toman is grateful to have been able to be back on the pitch with her team.

“I am thankful for the time of the NWSL office staff and NWSL Medical Task Force for the development and safety plans that worked,” Toman said.

She continues to also be grateful for her experience at UWO.

“I truly enjoyed my college experience,” Toman said. “The passion and character that the ATEP staff had was a major influence on the good and headaches of the profession. As I learned at UWO, we as athletic trainers are always advocating for our players and patients.”