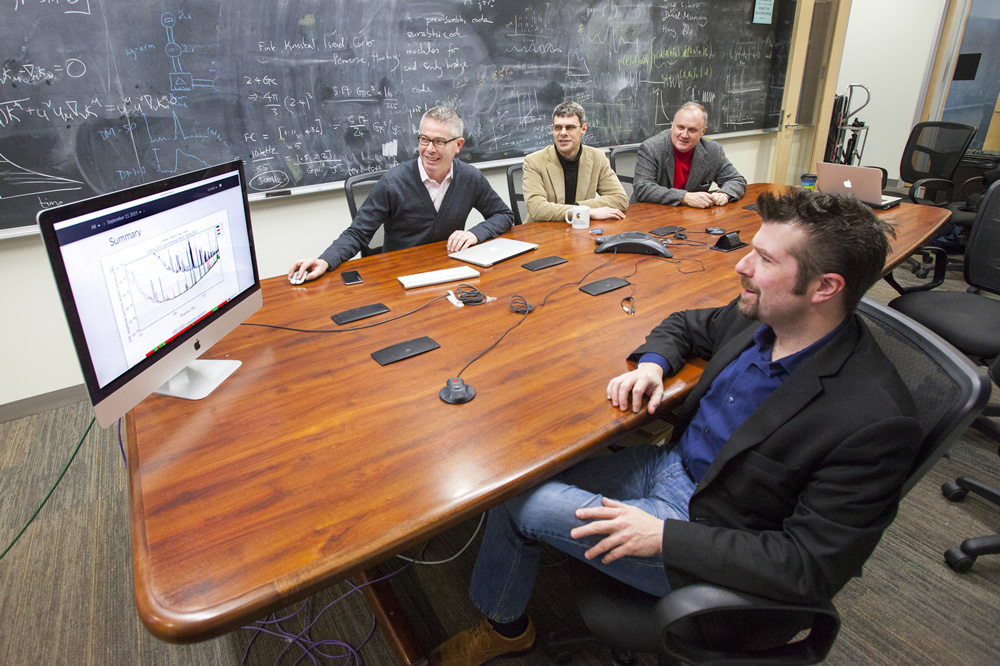 The names of UW-Milwaukee (UWM) scientists don’t appear in the announcement of the 2017 Nobel Prize winners in physics, but they played major roles in the achievement for which the prize was given – the discovery of gravitational waves by the Laser Interferometer Gravitational-Wave Observatory (LIGO).

UWM’s Leonard E. Parker Center for Gravitation, Cosmology and Astrophysics is the home to the team responsible for teasing the signal of discovery from exquisitely fine details in a sea of data from the LIGO detectors in Washington and Louisiana.

On Sept. 14, 2015, LIGO instruments detected infinitesimal ripples in space-time create billions of years ago by the collision of two massive black holes. The detection validated decades of painstaking work to build and refine LIGO, and confirmed a century-old prediction by Albert Einstein.

The dramatic find also promised to revolutionize how we explore the cosmos, and indeed discoveries are continuing apace – with another major announcement expected later this month.

The UWM team developed the analytical framework and the computational tools to make LIGO’s discoveries possible.

“The UWM group has been a key part of the project from very early on,” said Clifford Will, a distinguished professor of physics at Florida State University who is known for his contributions to the Einstein’s theory of general relativity. “They were involved both in building the infrastructure and in resolving issues related to using the data. They were responsible for important calculations that were used to make the detection. Some of those formulas were built into the data-analysis protocol for LIGO.”

Brady, professor of physics and director of the Parker Center, explains UWM’s role this way: “You might say that, if the detectors are LIGO’s eyes, we played key roles in developing the brains and the mind that perceived and understood what the eyes detected,” Brady said.

Brady tipped his cap to the Nobel winners. “We’re thrilled that Rai, Kip and Barry have been recognized with the Nobel Prize for their work on gravitational waves,” he said. “We’ve learned so much from each of them over the years and are glad they created the opportunity for us to be part of this momentous discovery.”

Perceiving a signal requires an immense amount of computing to process the data. UWM played a key role in designing and building a cluster of computers to create a dedicated supercomputer.

“Construction of the cluster at UWM began about the same time as the LIGO Scientific Collaboration formed in 1997,” said Wiseman, associate professor of physics at UWM. Wiseman and Bruce Allen, who is now director of the Max Planck Institute for Gravitational Physics in Germany, were the main architects of UWM’s computer hardware.

Today, the UWM cluster is one of several that comprise the LIGO Data Grid, the network of supercomputers needed to scour the voluminous data accumulated in the search.

But computers are only as smart as their programming. The UWM physicists and their collaborators – many of them former students – developed and implemented the analytical tools needed to detect the signature of gravitational waves in the steady stream of signals from LIGO’s detectors.

“Early on, we were inventing the methods to search that much data and inventing the computing methodologies to analyze it,” Brady said. “It hadn’t been done before.”

Another important role of the UWM team was to massage LIGO’s data into a form that can be analyzed, a process called calibration, the first part of the data handling system created at UWM.

“The [detector] delivers an electric signal that’s related to a gravitational wave signal, but you need to calibrate the data to see it,” said Siemens, an associate professor of physics at UWM who co-chaired the LIGO Scientific Collaboration’s Calibration Team.

UWM’s computing system also serves as the alarm system that notifies project members when the instruments have detected a signal worthy of closer examination.

By Sept. 14, 2015, the team’s work had been refined and practically perfected. Shortly after Advanced LIGO began taking data, the system sounded an alarm.

“We knew within three minutes that the detectors had seen something,” said UWM postdoctoral researcher Sarah Caudill, who ran the analysis that confirmed the signal came from two black holes.

“Someone made a time-frequency spectrogram and when I first saw those plots, my heart skipped a beat. We are all trained to look for the chirp-like signature of a real gravitational wave in the spectrograms. And these showed a beautiful textbook example of a chirp signal.”

The first detection of a gravitational wave had been made.