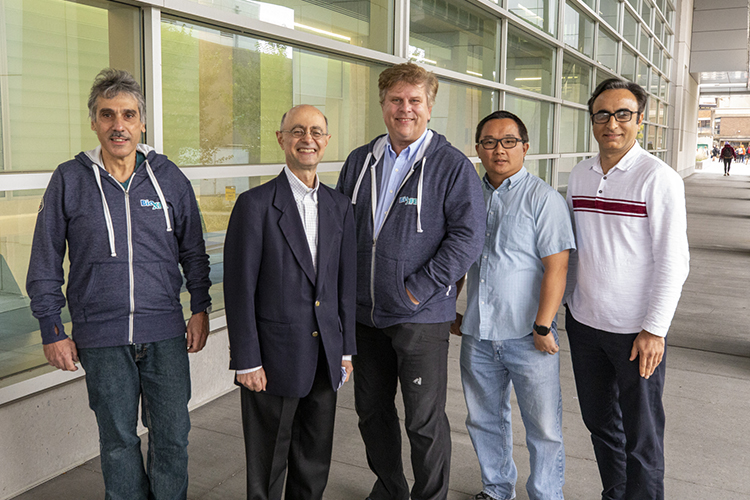 UWM researchers who contributed to the paper include Peter Schwander (from left), Abbas Ourmazd, Marius Schmidt, Russell Fung and Ahmad Hosseinizadeh, who is the first author. (UWM Photo/Troye Fox)

Scientists are trying to discover the exact sequence of events that occurs when light strikes photoactive proteins, changing their atomic structure, or “shape.” That biochemical process unfolds in processes like photosynthesis.

Until now, only the first and last states of a molecule before and after certain ultrafast chemical reactions could be determined. Scientists want to know how the absorbed energy affects the protein’s shape in the course of the reaction. Only then can they discover how the protein accomplishes its job.

A team of researchers, led by Abbas Ourmazd, UWM distinguished professor of physics, and Robin Santra from the Deutsches Elektronen-Synchrotron (DESY), has created a distinctive machine-learning approach to track the way in which the photoactive yellow protein (PYP) undergoes changes in its structure in a fraction of a second after being excited by light.

The event occurs so quickly that current methods of molecular imaging could not capture it. Now, the research team has used their technique to make a 3D movie of the event.

Their algorithm used data from a 2016 molecular movie that showed PYP changing its shape upon sensing light. But the older movie captured what happened on a longer time scale. The new movie reveals how the protein changes in a time window that was so lighting quick, it was “hidden” within the older version.

The details were published Nov. 3 in the journal Nature.

The resulting movies show the way PYP’s atomic structure changes as the 2,000-atom protein passes through a “conical intersection” in only a few femtoseconds (quadrillionths of a second).

Their movie shows how the protein changes even before the photon’s energy is manifested as heat after it is absorbed, said Marius Schmidt, a UWM professor of physics.

Schmidt led the 2016 experiment that generated the data used for this project.

The new data-science technique “captures” ultrafast motions of the protein as it reacts to the absorption of a photon, said Ahmad Hosseinizadeh, UWM scientist and the paper’s first author.

“This has been done in the presence of extreme noise and with almost 97% incomplete information,” Hosseinizadeh said.

Using the imaging and data-science approach to unmask large proteins as they execute the body’s vital functions has potential implications for our health, Ourmazd said.

Besides its application to structural biology, the algorithm can be used to solve other problems involving timing uncertainties. For example, in 2020 the UWM group used the algorithm to greatly improve the estimation of the fetal gestational age, when the exact date of conception is unknown. This is important for predicting premature birth, the leading cause of death in young children.

Work described in the just-published Nature paper was performed in association with BioXFEL, a Science and Technology Center created in 2013 by the National Science Foundation to use X-ray Free Electron Lasers (XFELs) to create 3D movies of molecular events, such as drugs binding or proteins working on ultrafast timescales. The development of underlying algorithms was supported by the U.S. Department of Energy.

XFELs produce a stream of extremely intense X-rays, firing in short pulses so rapid that they can capture images of some of the fastest processes in nature.