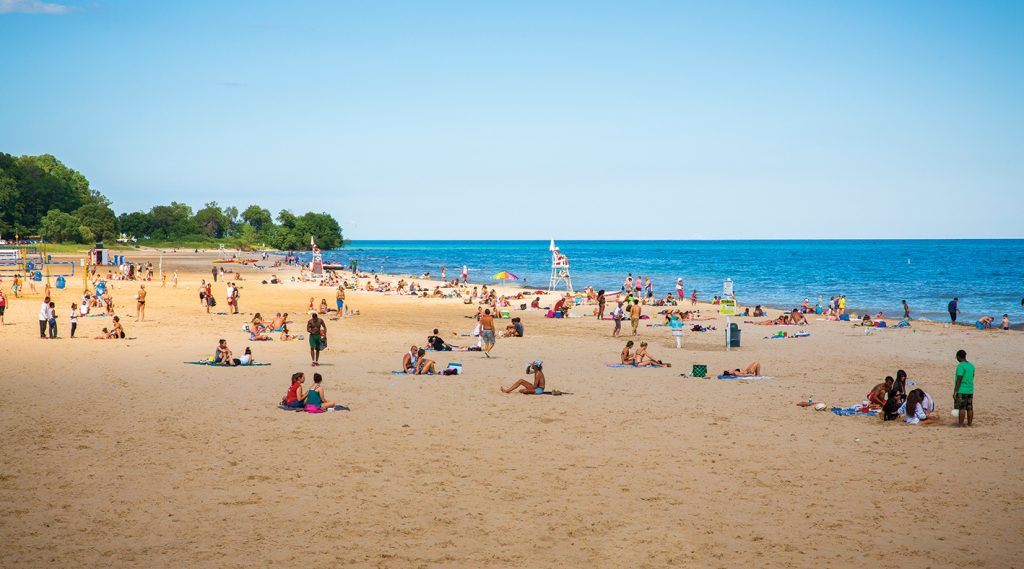 Lake Michigan was one of the things that drew Sandra McLellan back to her hometown in 1998, and she made a point of taking her son to the beach. Often.

But the beach had changed since her childhood. Beautiful Bradford Beach on Milwaukee’s east side was contaminated by E. coli. At South Shore Beach, runoff from large concrete parking lots polluted the water, and the area was closed to swimmers more than 60 percent of the time.

McLellan had a doctorate in environmental health, so she understood that Lake Michigan’s unhealthy and stressed beaches were symptomatic of a bigger problem. The lake’s abundant fresh water supply was under threat from the daily pressures of urban life – pollutants, invasive species, human activity and even dog waste.

Since then, the professor at UWM’s School of Freshwater Sciences has been working from her lab on Milwaukee’s inner harbor to address the problem. Her research informs a network of engineers, urban planners, biologists and environmentalists. Across southeastern Wisconsin, she has worked with university and city partners to rehabilitate the urban shoreline, find and repair leaky sewage pipes and unlock the secrets of the delicate microbiome that keeps Lake Michigan one of the world’s top five sources of healthy drinking water. Funded by UW Sea Grant, the National Institutes of Health and MillerCoors, McLellan’s work is reshaping the city’s relationship with water and making Milwaukee beaches popular again.

“When we see the near-shore areas improve in terms of water quality, we see more swimming and healthier fish populations,” McLellan said.

Improvements include rain gardens that capture stormwater from city streets and roofs before it hits the lake. “The more we can hold stormwater back, the more we can control pollutants in our lake.”

But McLellan says the lake won’t ever be completely out of danger as long as major cities sit on its shores.

“It’s not easy to keep urban water clean. A major metropolitan area puts so much pressure on lake and rivers. After a major storm, you can see that urban rivers get extra dirty from the runoff. Rain pulls things like blacktop sealant and dog waste off the street and into the water. Leaking sewers can release sewage to our waterways.”

Other stressors include open garbage cans along the lakeshore that attract gulls. Dog and bird waste accumulate, further degrading water quality. Beach sand traps bacteria and drags it into the lake. Milwaukee is home to more than 10,000 miles of pipes that can leak or break as they transport wastewater. Major storms can cause pipes to overflow. Nutrients and bacteria get into the water, disrupting the natural microorganisms that underpin the lake’s ecosystem. Pathogens in human waste create a health risk for waterborne disease.

Working with fellow microbiologists and city engineers, McLellan has sampled and sequenced Lake Michigan water to ID major bacterial pollution sources and trace the flow of contaminated water to leaking or broken pipes. Sometimes the pipes are simply hooked up wrong, sending sewage directly into rivers.

“We map those breaks and misconnections so they can be prioritized and repaired,” McLellan explained. “I know just enough about the system from working with it so much over the years. Even better, I know the engineers.”

Lake Michigan remains McLellan’s first love as a scientist and Milwaukee native, but federally funded research and speaking engagements keep her active on the national water scene. In 2015, she and colleague Ryan Newton sampled water in 71 American cities for an NIH study that tracked human DNA in sewage samples to see what water samples could reveal about the health of a city’s human population. When compared to existing CDC data, human microorganisms in water samples predicted with about 90 percent accuracy a city’s obesity rate. The study received much national attention because it could change the way public-health researchers look at the health of a city’s population.

McLellan said new techniques and technology enabled them to do the work.

“Ten years ago we would never be able to get the data we get now. New sequencing technology gives us an unprecedented view of who is in there, and even what they are doing – their function in a microbial community.”

Close to home, she is involved in renovation of South Shore Beach with support from MillerCoors. Nearby parking lots will be repaved to handle and clear stormwater, keeping more pollutants out of the lake. Naturalization plans will make the beach more welcoming to people, but less attractive to birds and ducks. Longer-term, one solution may be to boost access to an area 100 yards south of the beach, as more than 10 years of monitoring show it’s less affected by runoff and other sources of bacteria.

There’s one other way beach life has changed for McLellan. She now has a second son, who is 7. Together they go to Bradford Beach, one of her favorite Milwaukee spots.

“Ten years ago there was no one at the beach,” she said, smiling. “Now I have trouble finding a place to put my towel.” 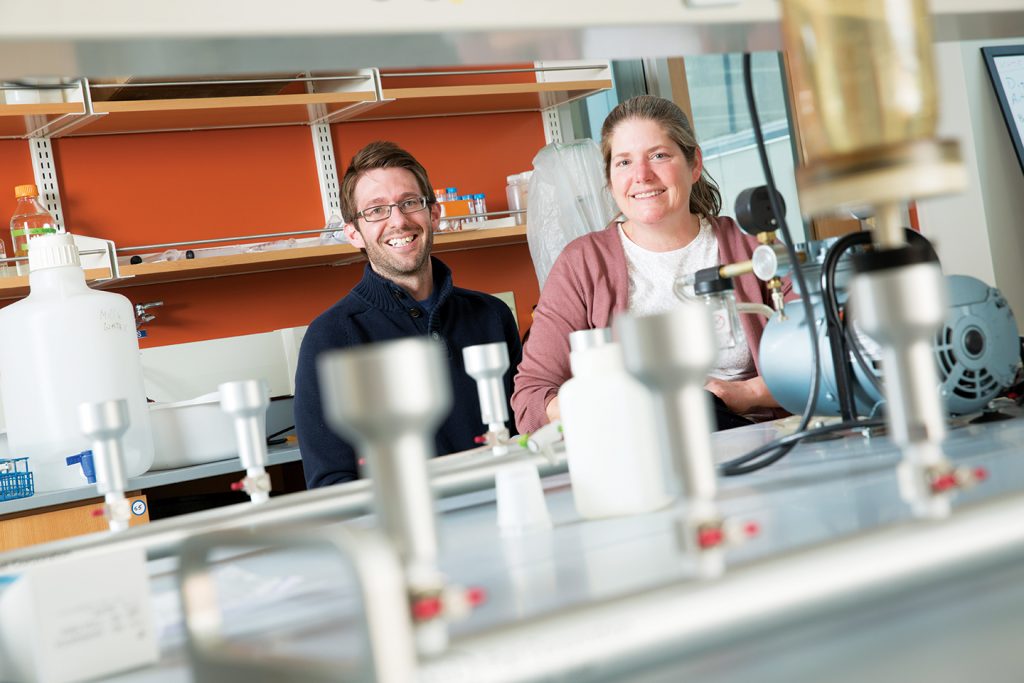 “You can never have too many water samples,” said microbiologist Sandra McLellan (right), who ships a water sample from every place she visits back to the McLellan Lab. With colleague Ryan Newton (left) she sampled water from 71 U.S. cities for a major NIH study. (UWM Photo/Troye Fox)