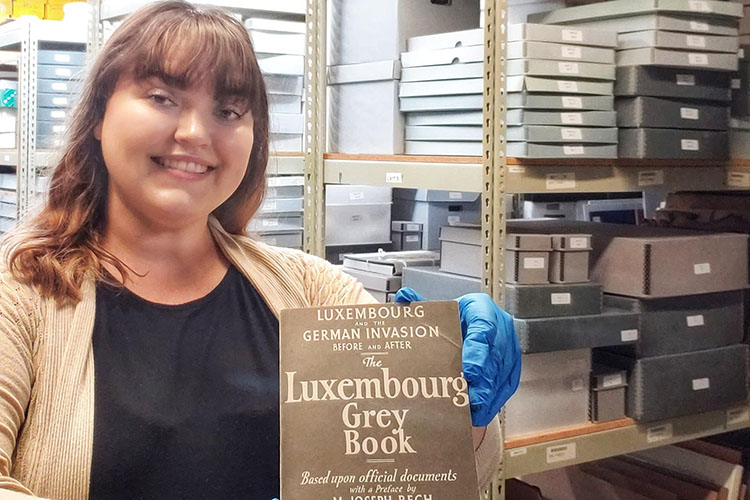 UWM history alumna Serena Stuettgen holds up an artifact from the archives at the Luxembourg American Cultural Society museum, where she is a curator. (Photo courtesy of Serena Stuettgen)

The only thing that Serena Stuettgen knew about Luxembourg was that it was a small country in Europe. Even so, she applied as a curator at the Luxembourg American Cultural Society Museum (known as LACS) in 2019, hoping to land her first full-time museum job.

Today, she helps museum patrons track their Luxembourg lineage, helps tell the story of Luxembourg immigration and works to keep the cultural connections between Luxembourg and the United States strong and vibrant – especially important now that Milwaukee Mayor Tom Barrett has been nominated to serve as the next ambassador to the small country.

Stuettgen, a UWM alumna who majored in history and later graduated with a master’s in public history and museum studies, sat down to talk about her work and the fascinating connection between Luxembourg and Wisconsin.

First things first – what drew you to UWM for your studies?

I chose UWM specifically because of the history program. I knew that I was going to get into museums, and I really liked the graduate program with the museum studies certificate.

If you always knew you were going into museums, did you want to be a curator since you were young?

Yes, but I didn’t know what it was called. Going to museums, I was always like, “I want to go behind the scenes. I want to go past the ropes. Well, I guess I’ll get my master’s, then, so I can go touch all the objects!”

Do you have a particular field of history you’re most interested in?

I feel like every public historian chooses history because it offers the broadest range and you can delve into whatever you want. I eventually focused more on the Holocaust and some of the intersections of Jewish and German history, and German religious history and how that was part of the lead-up to the Holocaust and World War II. I did my internship at the U.S. Holocaust Museum in Washington D.C. It was one of the best experiences I ever had.

That experience must have helped you land your current job. It’s not exactly Germany, but Luxembourg is in that region and shares a lot of that history.

It helped that I had an understanding in general of European history. That’s one of the good things about my job: It’s a broad enough topic talking about Luxembourg that I’m able to focus on my areas of study as well as Luxembourg history. I wrote an article for our next magazine coming out where I interviewed a gentleman whose Jewish family escaped Luxembourg after the Nazis took over. So, I’m bringing those two topics together.

How exactly did you end up at LACS?

There was about a year between graduating with my master’s and getting this job. I was working at the Pabst Mansion … as a museum assistant, and working as an art handler at Guardian Fine Art Services. Those were my two part-time jobs, and I was looking for a full-time job.

I had a Google alert for museum jobs. (I saw the listing) and thought, that looks interesting, and it’s a full-time job in the museum world. So, I was going for it.

They told me afterwards that, interestingly enough, what set me apart was that I had integrated pest management experience. In museums, you have to make sure that the collection is taken care of and kept safe from any bugs or mice, small rodents, or things like that that would damage it.

You began working at LACS in 2019. What have you learned about Luxembourg since?

A lot. I know so much more than I ever thought I would about Luxembourg. It’s a small country – a little bit smaller than the state of Rhode Island. There’s some debate as to whether it’s the richest or second-richest country in the world.

It’s such a unique, kind of weird place. We have such a good relationship with the government of Luxembourg. For example, the monarch of Luxembourg – they’re a grand duchy, so Grand Duke Henri visited here at LACS for their grand opening in 2009. You think, oh, the monarch of a foreign country came here. That’s interesting! Many of our board members are still or have been part of the Luxembourg government.

What is the mission of LACS?

Why is this museum in Wisconsin, of all places?

Currently, Luxembourg has a population of just under 600,000 people. In the 1800s, they hovered at around 200,000-300,000. During the 1800s, 70,000 Luxembourgers immigrated to the United States – so a big chunk of the population came, mostly to Wisconsin, Minnesota, Iowa, and Illinois. That’s why we’re here. Even though we’re located in the town of Belgium, Wisconsin, it’s all Luxembourgers who settled the town and are still here today.

Tell me about the museum. What types of things are on display?

We focus, of course, mainly on Luxembourg, since not many people know about the country. Half of our permanent exhibit is about what Luxembourg is like and where it is. The other half is about the immigration story of Luxembourgers to the United States and the Luxembourg Americans who are here today.

Mostly artifacts center around Luxembourg-American history. We have about 23,000 artifacts in our archives. We also have a research center here that focuses on Luxembourg genealogy. … We have cemetery records, church records, and family trees that people have put together as part of their family history. Mostly we focus on collecting Luxembourg-American artifacts.

As a curator, what is your job?

As a curator, you put on many different hats. Mostly, I manage the museum and exhibits as well as the research center and library. I do enjoy reading the personal histories, especially the family histories people have put together. It’s a view into the past, and it’s not one of the “great moments in history”; it’s just normal people trying to make a go of it after immigrating here.

Now Milwaukee has another Luxembourg connection: President Biden has nominated Milwaukee Mayor Tom Barrett to be the next ambassador to Luxembourg. How did LACS take the news?

We have an annual festival in August and this year, we saw Mayor Barrett there. Then two weeks later, we heard the news (that he had been nominated), so we think it was a research trip. We were all excited about the festival because this year we had the new (Luxembourgish) ambassador to the United States visiting us. So, we sort of had two ambassadors at the festival.

Do you think Mayor Barrett’s nomination might spark some new interest in the museum?

It has already. A few people have come in and said that they saw on the news that Mayor Barrett was going to Luxembourg. So, it’s inspired a few new visitors.

How did UWM help you get started in your career?

Luxembourg was definitely not on my radar when I was a child. But that’s one of the things that I enjoyed about the UWM public history program and the museum studies program. You’re learning these skills that can translate into so many different museums or areas working with the public. You learn the skill of doing your own research and being able to understand other cultures.

Luxembourg at a glance:

Fun Fact: Some of the steel used in construction of American Family Field (formerly Miller Park) comes from Luxembourg.