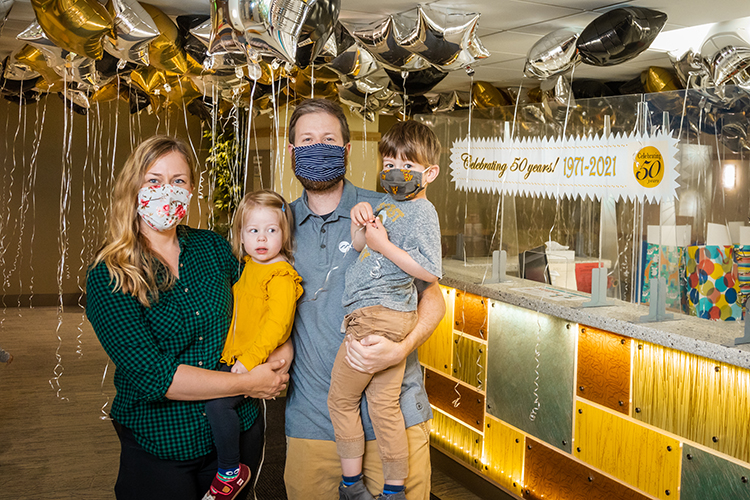 Ryan Rupp attended the Children’s Learning Center as a child and now, his children are there. Rupp is pictured at the 50th anniversary celebration with his wife, Brenda Hasse-Rupp, and their two children, Arthur and Margot. (UWM Photo/Elora Hennessey)

Fifty years ago, the Children’s Learning Center at the University of Wisconsin-Milwaukee opened its doors to serve students who needed child care.

Since then, thousands of children have gotten an educational foundation as well as care through the center, which serves children from six weeks old to 12 years.

The center kicked off its 50th anniversary celebration year on Monday, Oct. 4, with a low-key event in keeping with continuing COVID-19 guidance, said Elizabeth Smith, the center’s director. “We’re hoping to have some larger gatherings later in the year.”

The kickoff included a lobby full of gold, silver, and black balloons, raffles for children and staff, healthy treats, a bulletin board showing the countdown to the 50th anniversary and a display highlighting what was happening in 1971.

When the center opened with two rooms in Vogel Hall in that year, the times were turbulent.

“During the fall of 1971, there was constant unrest on campuses across the country as students protested the war in Vietnam,” said the center’s former director, Pam Boulton, who started at the center as a student worker and retired in 2011 after 40 years. “More than once, I came in early in the morning to find windows broken and had to clean up the glass before the children came.”

A need for child care

But the need for child care for students’ children was critical.

“We were popular right from the start,” recalled Boulton, “Students needed the service and were delighted to have us available.” The cost at that time was 30 cents an hour.

The center grew, moving from the two rooms at Vogel Hall to the Kunkle Center, a former elementary school on the campus. In 2014, when the Kunkle Center was torn down for campus expansion, the center moved to new facilities – especially designed to delight children – in the university’s Northwest Quadrant.

Over the years services expanded from workdays during the academic year to year-round, eventually accommodating children from six weeks old to 12 years old. The center has the capacity for 300 children, though it is currently accommodating only 200 children because of COVID-19 capacity restrictions. Its customers include UWM faculty, staff and members of the alumni association, as well as some from Milwaukee Public Schools and the nearby Shorewood district.

A shift toward learning

Over the years, the focus changed from simply child care to learning, reflected in the current name, the Children’s Learning Center.

“We want to be a model, seeing children as capable learners,” she added. “We really value our partnership with families, who are the first teacher for their child. We can learn from them, and they can learn from us to help the child and family flourish.”

A key to the center’s success through the years has been the dedicated staff, Smith said.

“Our teachers are highly talented, true experts in the field of early education, and they have dedicated their life’s work to the center,” Smith said. “Many staff have spent their entire career at the center. That really is something very special.” (See sidebar for a list of staff members who’ve given 20 or more years of service to the center.)

Student workers, many from the university’s early childhood education program, are a key part of the operation. Smith herself started as a student worker, then joined the staff for seven years, became a program coordinator and then director of the center. Her own daughter also attended the center from 8 weeks until age 5.

Many student staff apply for full-time positions when they complete their degrees, Smith said.

And, sometimes children who attended the center come back and bring their children.

Ryan Rupp, a UWM alum who was at the center from infancy to sixth grade, turned to the center when he and wife, Brenda Hasse-Rupp, had children of their own. His 4-year-old son, Arthur, is now in the kindergarten program. Arthur’s teacher is Kelly Pope, who also taught Ryan in kindergarten. Rupp’s daughter, Margot, who is almost 2 years old, is also at the center.

Rupp fondly remembers his years at the center, from riding around the basement gym on scooters to building forts with fuzzy brown blocks. “We had really good times. I have a lot of good memories.”

His time at the center may also have influenced his future career – he’s now a software engineer. He recalled getting the chance to play with old panels for motherboards and ancient computers with floppy disks. “They really let us explore and learn.”

One of the key attributes of the center is the sense of community among staff, children and parents, built up over many years, Smith said.

Rupp still feels part of that community. “A lot of the friends I made in the program, I’m still very close to.”