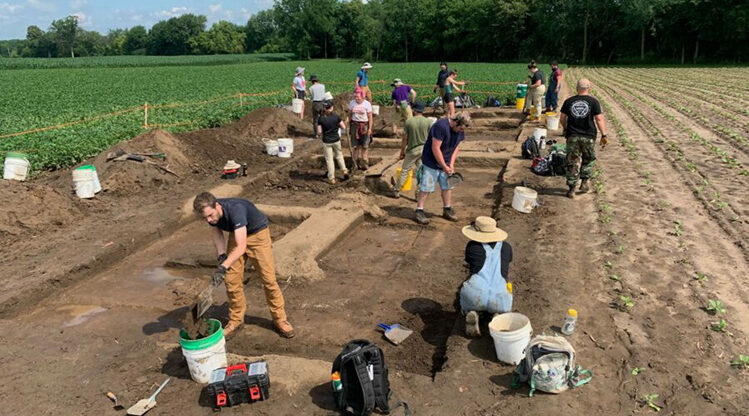 As he ventured through the field towards the dig site, Seth Schneider had to be careful where he put his feet. To his left were rows of newly planted tobacco, and to his right were the uncovered remains of an ancient village site.

Nestled on a small strip of dirt at the edge of the tobacco field were Schneider’s students, a cohort of budding archaeologists carefully excavating a checkerboard of 2×2 meter squares. They dug in 10 centimeters deep levels and logged their findings in their field journals.

In the squares, they found pottery sherds, stone tools called ‘lithics,’ and discolored earth representing storage pits and structures that once stood in the same spot the students stand today. It’s all that remains of people archaeologists refer to as the Oneota, groupings of Native Americans who lived in Wisconsin roughly 1,000 years ago.

Schneider led this summer’s UWM Anthropology Field School. It’s his job to help students in the field school not only learn about this ancient village, but also learn to become archaeologists themselves.

“We want to give the students basically a practicum or hands-on approach,” Schneider said as he watched a student examine a pottery sherd. “They are the researchers.”

A brief history of field school

Schneider, a principal investigator in UWM’s Archaeological Research Laboratory Center, continued the excavation at the Koshkonong Creek Village Site that Rick Edwards, a principal investigator in UWM’s Archaological Research Laboratory Center, began in 2012. Schneider collaborated with Edwards and together they’re old pros; this was their fifth summer working together in the Field School on Lake Koshkonong.

They learned their trade at the hands of UWM’s anthropology professor emeritus Bob Jeske, who led UWM anthropology students on field school excavations for some 30 years. They’ve been exploring the Oneota settlements around Lake Koshkonong and surrounding farmland. There are several sites scattered throughout the area, and Schneider said the Field Schools have found evidence that the groups used to interact with each other.

This year, the Field School returned to a farm in Edgerton, Wisconsin, where Edwards has previously run excavations.

“The farm family is very excited to have us out there. Just knowing and learning about what used to be here is a very cool thing,” Schneider said.

Learning as they dig 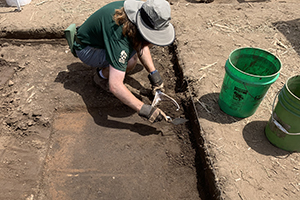 The Field School runs for six weeks, during which students are expected to conduct surveys to identify archaeological sites and run excavations like a professional archaeological dig.

“We need to give them the opportunity to excavate a unit using methods we would use on any other archaeology site,” Schneider said. “We talk about the theories behind what we’re doing, the methods … and material culture (pottery, stone tools, etc.).”

To begin, students started with a “Phase 1” survey, where they walked the field that they would later excavate. They were looking for material remains on the ground that might have been churned up during plowing, since the site is a working farm.

Just how do you tell the difference between a stone tool and a regular rock?

‘It really hits you’

DeMaio and Payne are both graduate students in the anthropology. They spent their summer baking in the heat and shivering through the rain as they worked on the next phase of the excavation: Digging out a checkerboard of 2×2 meter squares to reach below the “plow zone” and sifting through the dirt to filter out lithics, pottery sherds and other materials.

“When you bring it back to the surface, that’s where it really hits you. These are cultural materials that have been here for hundreds and hundreds of years,” Payne said.

The students mapped out their squares, particularly noting the discolored dirt representing cultural features indicating that ancient people dug a pit or erected a structure on this spot.

“They’re not specifically wigwams, but they’re about that size (5×5 meters),” Schneider said. “Depending on the size of the feature, we can tell this pit feature was used to process wild rice.”

They finished by digging out the untouched checkered squares so that the entire area was excavated, covering 16×4.5 meters. By doing so, they could determine the full extent of the structures that once stood in the area.

In addition to the excavation, the students also learned other archaeological and survey skills, including technologically mapping sites and exploring using ground-penetrating radar.

Digging in the past, preparing for the future

By the end of the Field School, students walked away with a better grasp of what it takes to perform cultural excavations.

“If they go on to get their graduate degree, having the basics down and knowing where to find archaeology sites and how to handle survey work and excavation work – these are skills they can take anywhere,” Schneider said.

“A lot of students will go on and get jobs in this kind of thing,” Edwards added. “You get a better appreciation for what it is (you have in museum collections) when you’re the one taking it out of the ground.”

After the excavation was complete, students headed back to UWM where they will spend the fall semester analyzing and reporting on the artifacts they found during the Field School. Schneider and Edwards are looking to publish their findings.

DeMaio was excited to get back to the lab and examine the unearthed artifacts. She was initially drawn to anthropology because she enjoyed working with tangible connections to the past. Being part of the team to excavate this Oneota site gave her both an education and a sense of purpose.

“To me, it’s always about being the voice for people who can’t speak for themselves anymore,” she said. “There were people here before us. … We owe it to them to explore this.”