UW-Milwaukee alum & teacher of the year stresses value of language 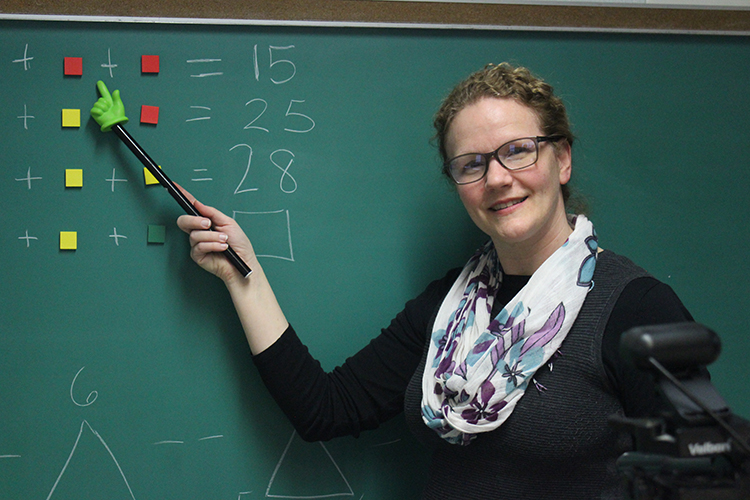 When Susan Richardson’s students take a test and come across the word perpendicular, they’re not fazed, even though they’ve learned the concept in German as “senkrecht auf einander.”

“We have kids who never learned math in English, and they’ve never heard the word perpendicular in class, yet when they take standardized tests they score as high or higher than students who are learning all these terms in English. They understand the concept,” said Richardson, a third-grade teacher at Milwaukee’s German Immersion School.

The Department of Public Instruction recently selected Richardson as one of five teachers of the year for Wisconsin. She is a graduate of UWM’s MALLT (master of arts in language, literature and translation) program. Another teacher with UWM connections honored was Koren Jackson, a special education teacher at Milwaukee Public Schools’ Transition High School. She completed the School of Education’s special education program as a post-baccalaureate student.

“When you catch kids in this linguistic window between ages 4 and 7, their brains are like sponges,” she said. “They can absorb so many more vocabulary words than an adult. They’ll have more bridges, synapses growing in their brain.”

And while she teaches in German, any language learned in a good immersive environment is a benefit. “If it’s German, fantastic. If it’s Spanish, ‘fantastico.’ Their brains will benefit for life.”

Besides, she adds, “The more languages you know, the more doors open to you.”

Milwaukee German Immersion School is a public school with 600 students, and has the mission of educating urban students using German as the core language of instruction. All classes every day are taught in German, except for a 30-minute period at the end of the day focused on English language arts and literature. While a few of her 28 students come from families with German backgrounds, Richardson said, most do not.

Richardson’s own journey into another culture began with her German grandparents, who lived just down the road from her family when she was growing up in Sheboygan. Talking to them in German was like learning a secret language, a code, she said.

She completed her undergraduate education at Carthage College, majoring in German, history and secondary education.  After graduating, she decided to have an adventure and immerse herself in the German language.

She set off to Germany with a one-way ticket and $300 in her pocket – “I still can’t believe my parents let me do that.” She started teaching English and planned to stay for a year or two. But then she met a young man, and ended up staying seven years. She and Andrew married, and their first child was born in Germany. They eventually emigrated to the U.S. and had two more children. (Those children are now in eighth grade, high school and college. Her husband teaches German at Brookfield Academy.

When Richardson decided she needed to exercise her brain and expand her horizons, she decided to come to UWM for the MALLT program.

“UWM was the perfect fit. Because I love all things language and linguistic-based and of course German.”  As a busy mother of three who was also substitute teaching, she appreciated the flexibility of UWM’s program. “They are aware that the average student is not 20; they have day jobs, they have other commitments.”

In appreciation of her experiences, Richardson has reached out to UWM to invite German students and aspiring teachers to visit her classroom.

This year, the Wisconsin Teacher of the Year program expanded to honor five rather than four teachers. And the teachers will be given more of a role as part of a council advising the state Department of Public Instruction on policy.

Richardson is glad teachers are being given more of a voice. And, of course, she has a subject she’s passionate about already.

“I’m honored to be chosen as a teacher of the year because it gives me a platform to encourage more people to learn a language, she said. “We live in a global society riddled with racial, political and cultural tension, but every effort toward greater intercultural competencies plants seeds of acceptance and open-mindedness.”