UW-Milwaukee alum finds her fit running Girls on the Run 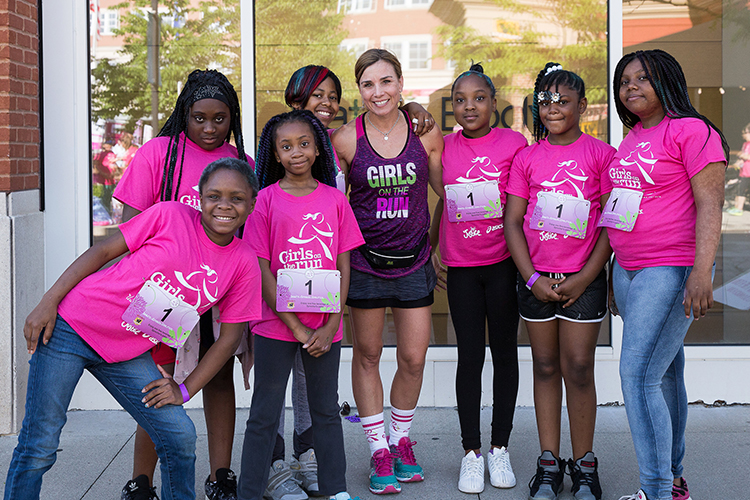 Tina Jones, executive director of Girls on the Run of Southeastern Wisconsin, stands with some of the kids involved in the program. “What I love about this organization is that we are there to build strong girls and look at the whole girl,” she said. “It’s not just the physical component of things, it’s the emotional component and the social component.” (Photo courtesy of Tina Jones)

It’s not often that someone looks at a job description and decides it’s a perfect fit.

But that’s what happened to Tina Jones, who earned her master’s degree from the School of Education’s Administrative Leadership program at UWM, when a friend of a friend told her about a staff position at an organization called Girls on the Run.

“When I read through what the program was, it was kind of like my ‘aha’ moment, finally feeling this is what I want to do with my life,” Jones said.

Jones has been with Girls on the Run since 2012, helping the organization expand from 200 girls to more than 2,000 in southeastern Wisconsin. She is now executive director.

At the time she heard about the position, she was the mother of three, an active volunteer in her children’s schools and a dedicated runner herself. A former All-American gymnast and triathlete, she’d taken up running to continue her athletic involvement.

Jones had worked with her school’s PTO to create the Cupcake Run, a 5K event, as a way to bring the community together to promote health and wellness. “I had planned runs, but I had never been truly in the nonprofit world and I didn’t know what I didn’t know, so there was really a big learning curve,” she said.

The mission of Girls on the Run is empowering young girls from third through eighth grades through life lessons to become “joyful, healthy and confident.”

The girls take part in 20 sessions. “What I love about this organization is that we are there to build strong girls and look at the whole girl,” Jones said. “It’s not just the physical component of things, it’s the emotional component and the social component.”

The first lessons focus on helping the girls see themselves as special and unique, and helping them understand peer pressure and bullying and how to talk about and deal with those issues. “Once the girls have talked about themselves and why they’re special, then the talk moves into why you need to be kind and appreciate the uniqueness of others,” Jones said.

The journey is important

And yes, she adds, there is running, but the organization – despite the name – is more about the journey and working hard toward an end goal.

Although the sessions end with a joyful 5K run to celebrate their accomplishments, “they don’t have to be star runners to be in the program. The run at the end teaches the girls about setting goals and having to put in hard work to reach their goals, but we want them to understand that physical activity should be part of their everyday life. It’s about the whole picture, health and wellness.”

Her 2005 degree in administrative leadership has provided a foundation for what she is doing now, Jones said. Her day-to-day work involves managing a growing organization, working with companies, foundations and other nonprofits to help build awareness of issues in the youth development arena and working on ways to collaborate and connect in the community, engage volunteers and raise funds to help build strong girls.

“I really had a great experience at UWM. It was one of those things that I didn’t know exactly at the time what all I was going to do with it, but to have those building blocks and the support from the professors was great,” Jones said. “It was a great learning environment, and the leadership skills I learned as well as the understanding about how creating a strong and positive culture in the workplace has helped me grow Girls on the Run of Southeastern Wisconsin into the growing nonprofit it is today.”