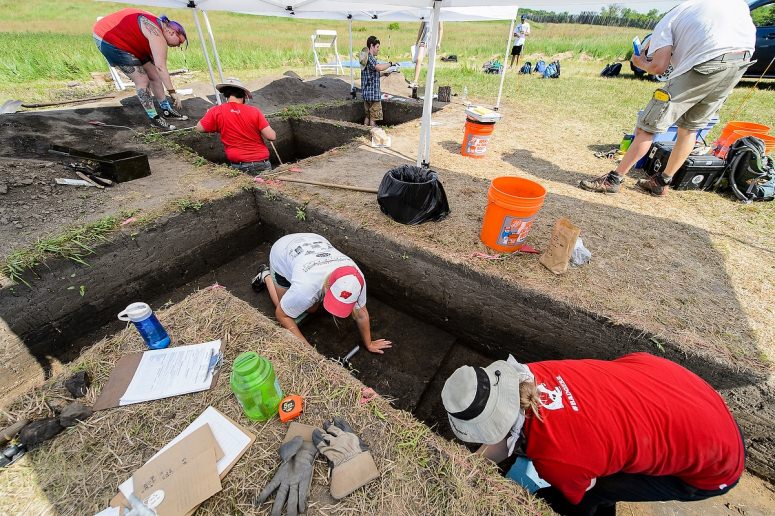 It was the first 90 degree day of the year in south-central Wisconsin. A searing sun beat down on the prairie grass, swaying in a gentle breeze, while wary red-winged blackbirds kept close watch on their nests.

Yet the people arrived at Aztalan State Park, in couples and in groups, young and old. They braved the heat on Friday, June 10, in order to take part in a public archaeology day, where excavations were underway to better understand the daily lives of the ancient peoples who called Aztalan home a millennium ago.

Hosted by University of Wisconsin–Madison anthropology Professor Sissel Schroeder, me (a science writer in University Communications) and partners — the nonprofit Friends of Aztalan and the Wisconsin Department of Natural Resources — the event and a similar one the next day were part of a three-year Ira and Ineva Reilly Baldwin Wisconsin Idea Endowment grant awarded to us for public outreach and education at Aztalan.

Visitors found Schroeder and her students actively engaged in the archaeological work meant to uncover how Late Woodland peoples lived their daily lives at Aztalan.

They were also part of research efforts Schroeder leads at Aztalan and an undergraduate field course she teaches in the summer, preparing students for entry-level archaeology jobs or graduate school. This summer, seven students were enrolled in the course, including Timothy Lemond, from the University of Wisconsin–Fond du Lac.

There was no shortage of visitors either day and on Friday, shortly before 10 a.m., they began to arrive. Bob Birmingham, former state archaeologist for Wisconsin and current executive director of Friends of Aztalan, shuttled people to the excavation site situated in a grassy field along the banks of the Crawfish River. Once there, visitors found Schroeder and her students, including graduate student Jake Pfaffenroth, actively engaged in the archaeological work meant to uncover how Late Woodland peoples, native to the Upper Midwest, and migrants from Cahokia, a once-bustling city near present day St. Louis, lived their daily lives at Aztalan.

“We want to know what people ate, where they built their houses, how they broke down cultural barriers to navigate their differences and come together as a community,” says Schroeder.

The students took turns greeting visitors at a table displaying artifacts from previous excavations — pottery and stone tools — as well as maps of the buried features the team plans to explore.

“We want to know what people ate, where they built their houses, how they broke down cultural barriers to navigate their differences and come together as a community.”

They then walked visitors through the site, talking about their work and showcasing what they had already found.

Soon, grandmothers with grandchildren recently off school for the summer were gathered around the deep excavation pits dug by the students. A 9-year-old boy lay belly down in the dirt, peering into a pit, asking questions like only a 9-year-old can. Families congregated around a sifting screen, helping separate bits of pottery, flecks of delicate black charcoal, and animal bone from the thick clay soil removed from the pits, in awe of discovering artifacts found for the first time in a millennium.

“I’m surprised by how well this is going and how many people have come out,” said Marissa Lee, a field manager at the site and recent graduate who took the field course last year. At center, field manager Marissa Lee screens soil and talks about her work with members of the public. At right visiting from Fitchburg, Wisconsin, is Melissa Phinney and her daughter, Samara. PHOTO: JEFF MILLER

One visiting couple had recently moved back to nearby Lake Mills and were at the park for the first time. They were eager to bring their son, a recent anthropology grad, back with them.

Often, Lupe Granados, a recent UW–Madison graduate enrolled in the field course to complete an anthropology certificate, could be found bent over in a pit showing a young girl or boy bits of pottery and bone she had found earlier in the day.

The students had dug these pits in the weeks prior, beginning by removing the top layers of the soil that bore the footprint of Wisconsin’s more recent agricultural past. Beneath were soil layers stained by evidence of human occupation 1,000 years ago, scattered with bits of pottery, discarded animal bones and black charcoal, and pock-marked with post holes from old stockade and house walls.

“I didn’t know what to expect, except digging.”

Using special sharp shovels and sturdy trowels, the students were now shaving soil from the pit floors and walls, layer by painstaking layer, under a relentless sun. They were learning to document every detail on sheets of paper attached to clipboards, in personal research notebooks, and in diagrams on graph paper.

“I didn’t know what to expect, except digging,” said undergraduate Sarah Taylor when I asked her whether she had expected archaeology to include so much paperwork.

But documentation is crucial. Aztalan is generally recognized for its prominent mounds and the recreated stockade wall that once surrounded the site. However, many myths emerged when the site was first discovered in the late 1800s and these myths persist today. Lupe Granados describes her work to Amelia Kim, 7. Granados is a recent UW–Madison graduate enrolled in the field course to complete an anthropology certificate.PHOTO: JEFF MILLER

Schroeder’s students recently wrote about this in a post from the blog they are publishing weekly from the field and each time a visitor arrived, they helped dispel myths.

“It’s fascinating,” said Faye Kuphal, a history enthusiast from nearby Jefferson, visiting the site with Bill Krupinski. “It seems the more we find out, the more we don’t know.”

Brenda Thayer arrived at the event with her entire family, from her parents to her grandchildren. Thayer is a 6th grade social studies teacher at Fort Atkinson Middle School, one of our partners on the Baldwin grant, and she wanted to see the dig for herself. She is also working on continuing education credits this summer and we brainstormed how she could use Aztalan in her studies. Schroeder says other teachers who visited the site during the public events expressed interest and enthusiasm in the opportunities available.

In addition to outreach, Schroeder and I plan to provide in-class lessons and site visits for Fort Atkinson students throughout the year and into future summers. We are also working with a UW–Madison graduate student to develop open-access curriculum for K-12 students around the state.

At lunchtime on the Friday set aside for the public, the drumbeat of visitors quieted to a hum. The students continued their work quietly, cracking the occasional joke or sharing an exciting find. Without ceremony, they ate their lunches sitting on the ground next to their pits, or on overturned orange soil buckets. Schroeder took time to have them identify, think and hypothesize about what they were finding, asking questions to help them develop their own ideas.

“This would not be possible without their investment,” she said.

Eager and enthusiastic about their work, the students were often motivated to stay late at the site finishing “just one more thing,” or so focused they lost track of time, she said. It was a feeling to which I could relate that day, fueled by the experience.

Eager and enthusiastic about their work, the students were often motivated to stay late at the site finishing ‘just one more thing.’

“I thought field school was going to be a lot of not finding anything,” said student Emily Eichstedt-Anderson. “But it’s so exciting and so much fun, and every day, people happen upon us and ask: ‘What’s going on?’ It’s always really exciting.”

Schroeder and her students will continue work at the site through June 17, conditions permitting. Field studies will also be conducted next summer and the public is always welcome to attend. The Wisconsin Historical Society is an additional partner on the Baldwin grant project.