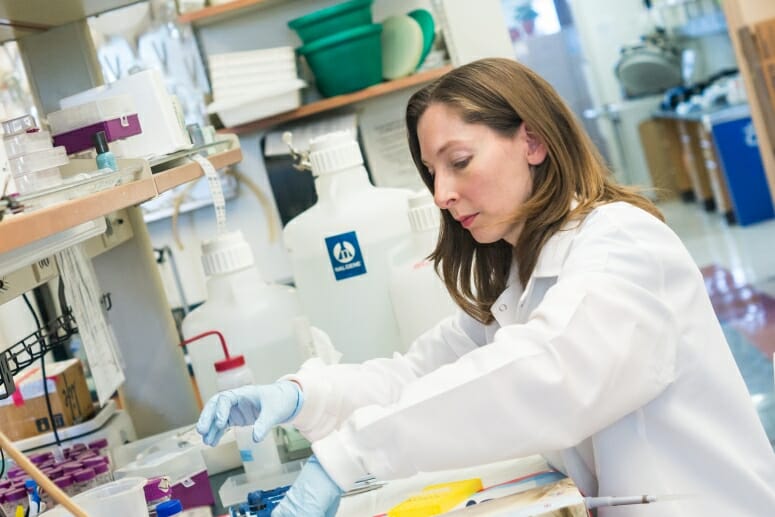 Beth Weaver wanted to know if there was a way to predict who would benefit from Taxol and who might not, to spare these patients the side effects of the potent chemotherapy drug. COURTESY OF UW CARBONE CANCER CENTER

Paclitaxel, or Taxol, is an old standby drug in the oncologist’s tool belt. Yet only about half of breast cancer patients treated with the drug see their tumors shrink or disappear, and doctors and researchers have no way of knowing which patients will benefit.

But that may soon change.

Published Sept. 8 in Science Translational Medicine, an analysis of patient samples by a team of researchers led by University of Wisconsin–Madison Professor of Cell and Regenerative Biology Beth Weaver has uncovered a key feature of breast cancers that renders them either vulnerable or resistant to paclitaxel treatment. And it could be used to help identify which patients are most likely to see success.

“It’s a huge problem,” says Weaver, a member of the UW Carbone Cancer Center. “Nearly half of patients who get this drug can be subjected to some pretty substantial side effects without any therapeutic benefit.”

Key to the finding is something called chromosomal instability, found in about half of breast cancers and caused by errors that take place when cells improperly divide.

Almost all cells in the body divide. This is how organisms grow and adapt. During that process, called mitosis, the original cell’s genetic material — in the form of chromosomes – is equally distributed or “segregated” between two identical daughter cells. When it doesn’t go smoothly, chromosome distribution becomes unbalanced or “mis-segregated,” and each daughter cell contains an incorrect amount of genetic material. This is a hallmark of cancer.

Low rates of mis-segregation, called chromosomal instability, can encourage cells to begin to divide unchecked and cause tumors. However, if this mis-segregation is extreme it causes the cells to die.

The researchers found that patients with cancers exhibiting high levels of chromosomal instability were more sensitive to paclitaxel and had better tumor suppression, meaning it could be the elusive predictor of paclitaxel success.

“That would be huge,” Weaver says. “You could measure for chromosomal instability on leftover tissue from a diagnostic biopsy, which patients need to have anyway, and potentially use that tissue for a biomarker test.”

Weaver, an expert in cell division and chromosome segregation, has studied paclitaxel in the lab ever since her graduate school days, but has gradually shifted her focus to examine how the commonly used chemotherapy works in the cells of breast cancer patients.

Researchers once believed that paclitaxel worked by preventing cancer cells from dividing. But in a previous study of patients on a standard, high-dose paclitaxel regimen, Weaver, her Carbone colleague Mark Burkard, and their research teams found that model didn’t hold up. Instead, they found that the drug amplified mis-segregation in dividing cancer cells.

“That suggested to us that the way we thought Taxol worked for the last 30 years was wrong, and that was a big question mark and concern,” Weaver says. It led her and her team to the hypothesis that paclitaxel may exert its anti-cancer effects by causing or taking advantage of chromosome instability.

In the latest study, the research team was able to study difficult-to-obtain breast cancer samples that captured a very specific moment in time in the life cycle of cells from breast cancer patients being treated with a typical low-dose paclitaxel regimen. Then they looked at what was happening during cell division.

During normal cell division, the cell forms structures called spindles, which attach to chromosomes at the center of the cell and then, like little ropes, pull the genetic material apart as the cell begins to split into two. This helps ensure the right number of chromosomes stay with the original cell and get added into the new daughter.

These spindles are anchored to a single location at either end of the cell, or at two poles. However, in the samples from patients treated with paclitaxel, the spindles formed multiple poles in the cells. These cells faced one of two fates: The abnormal spindles were maintained throughout cell division, or the spindles were eventually “focused” back down into traditional bipolar spindles.

“Understanding that this focusing is a major mechanism of resistance opens the door to first identifying novel drug targets and then developing drugs that will sensitize to paclitaxel,” Weaver explains.

Taken as a whole, the findings may represent a major step forward in the cancer community’s understanding of paclitaxel. And even though many non-chemotherapy therapeutics, such as targeted therapies and immunotherapies, are in development to treat breast cancer, Weaver says there’s a huge benefit to trying to teach this old drug some new tricks.

“What we’re really trying to do is turn this conventional chemotherapy into personalized medicine,” Weaver said. “That would be the best of all worlds because paclitaxel is widely used, it’s inexpensive, and clinicians have a ton of experience with it. If we could just target it to the right patients, it would be a huge improvement in cancer care.”