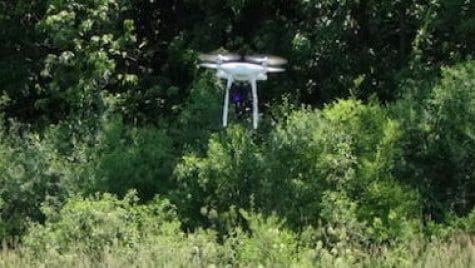 These days, researchers at the Wisconsin Geological and Natural History Survey are spending a little less time on the ground and more time in the air — looking at the ground.

By using temperature changes measured from above to gather estimates of soil thickness — a technique that proves much more cumbersome when done manually — the team hopes to help farmers more effectively limit groundwater contamination due to fertilizers and agricultural runoff.

This is especially true in areas across the state and the U.S. with a particularly contamination-prone type of geology known as karst, characterized by thin soils overlying fractured bedrock.

Among Hart and Graham’s study areas is Kewaunee County in northeastern Wisconsin, where groundwater contamination has continued to plague the community. Their work is funded by the Wisconsin Department of Agriculture, Trade and Consumer Protection.