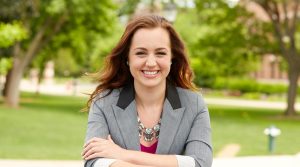 UW-La Crosse senior Devyn Prielipp was only 14 when her mother was murdered during a domestic violence dispute.

The tragedy changed the way she looked at life. She decided to live for today — a direction that led her to give life to someone else.

Only three years after her family tragedy, Prielipp began talking to doctors about donating a kidney. She’d read a story online about kidney donation and difference it could make — saving lives of those on waiting lists for years undergoing dialysis. Some get too sick to receive transplants, and others die waiting. About 13 people die each day waiting for a kidney transplant, according to the National Kidney Foundation.

But as much as Prielipp wanted to donate in her youth, getting approval wasn’t easy. Doctors urged her to wait and make sure the decision was right.

“A lot of people my age are still maturing and are not sure what they want out of life,” she explains. “They didn’t want me to regret it.”

But Prielipp’s past taught her that life isn’t guaranteed for anyone. She could go down the list of “what if” questions forever. “What if her future child needs a kidney?” or “What if she is in a car accident and needs her own?”

“I don’t want to live by those ‘what if’ questions. It’s exhausting,” she says. “I’m a firm believer in fate. Things are laid out for us, and what is going to happen will.”

So the best way to live is compassionately, she says.

After three years of waiting, Prielipp says her mind hadn’t wavered on donating. She kept calling doctors back and eventually was screened, tested and cleared for surgery in August 2015 at age 21.

For Prielipp’s non-directed kidney donation, she received the American Hero Award from the National Kidney Registry during the annual Season of Miracles Awards Gala May 4 at Rockefeller Plaza in New York City. Of the 15 non-directed donors invited, Prielipp was the youngest by decades.

Prielipp says the hardest question she gets is why she decided to donate.

“I don’t have an ulterior motive or specific reason why,” she says. “I was born blessed with a healthy lifestyle and I just want to help someone else have the same.”

Six months after surgery, Prielipp received a call from UW Health. They had a letter from the recipient’s family and needed her address.

“My arm hair stood up,” she recalls. “I was checking my mail like a crazy person. When it finally came, I opened it and my heart felt like it was exploding in my chest.”

Prielipp’s kidney went to a 14-year-old girl. The letter from the recipient’s mom spoke of her daughter’s ability to enjoy life in a way she couldn’t before and her daughter’s dream to go to art school. The letter included a drawing by the girl. It pictured her donor and “the girl who got your gift of life.”

“How that felt — I don’t think there is an adjective for it,” says Prielipp. “I’ve never had such an amazing feeling in my life. It made everything worthwhile.”

The kidney donation wasn’t the first time Prielipp reached out to help others. Several months after her mother, Teresa, was killed in July 2009, Prielipp helped organize the “Remembering Teresa Run/Walk.” The annual event continues today to raise awareness about domestic violence while raising funds for organizations that support those affected by it.

“This was our family’s way of coping,” says Prielipp. “My mom would be upset if we lay around and felt sorry for ourselves.”

Prielipp says her mom would likely be surprised to see how her compassion has grown — leading her to donate a kidney.

“I think initially she would have been concerned about my health like any parent, since it was a major surgery,” she says. “But I think she’d be proud, especially because I have shown that I’m still able to live the same healthy lifestyle with one kidney.”

Altruism: nothing new at UW-La Crosse

Prielipp doesn’t think her story of giving is extraordinary at UWL.

“I’ve met so many people in class who are equally as selfless and compassionate,” she says. “My experiences here have helped me grow into the person I’ve become.”

Cheri Niedzwiecki, associate professor of communication studies, meets many students who volunteer, fund raise for causes and give back in other ways. But until she met Prielipp, she had never heard of a student donating a kidney. She was particularly touched by her student’s donation because her father died of kidney disease four years ago and she knew the difficulty of living on dialysis.

“I’m always blown away by the things our student do for others,” Niedzwiecki says.