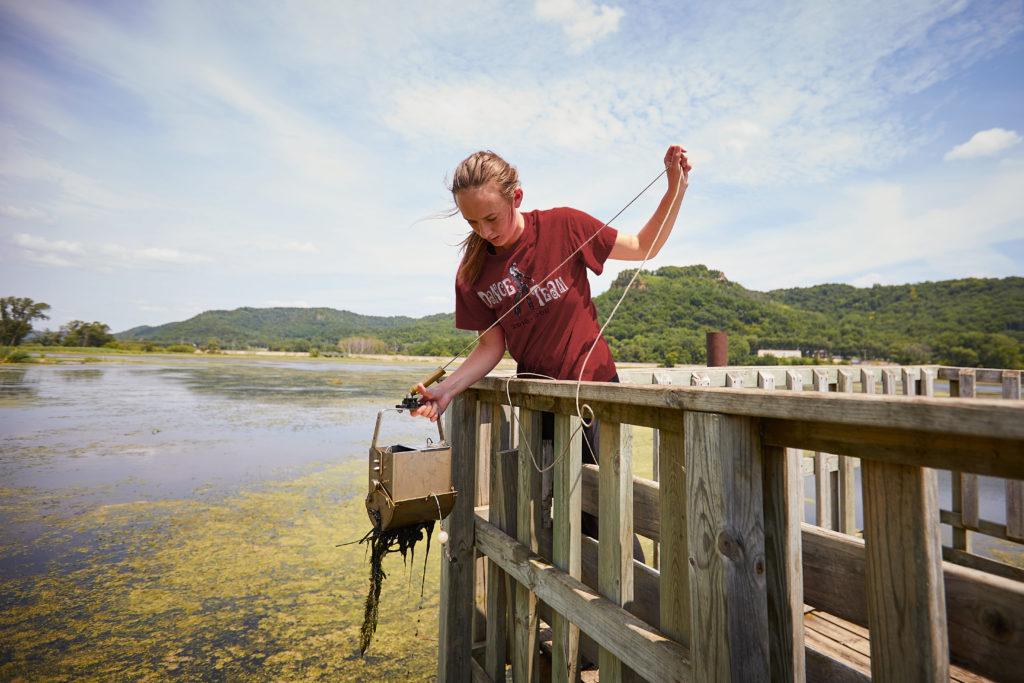 UWL graduate student Anna Hilger pulls up marsh water and sediment from La Crosse’s Myrick Marsh. The water will be mixed with crude oil for testing.

If a train derailed, spilling crude oil into La Crosse’s Myrick Marsh, what would happen to the community?

The community of microbes — that is.

Microorganisms — such as bacteria — are nearly all invisible to the human eye, which makes them easy to overlook. However, their value in an ecosystem is great, says UWL graduate student Anna Hilger. Her master’s thesis work is investigating what would happen to these microscopic organisms if crude oil spilled in the marsh. Her summer research is funded by a UWL Research, Service, and Educational Leadership (RSEL) grant, as well as funding from the Microbiology Department and the UWL River Studies Center.

“We hope it never happens,” says Hilger, regarding the potential spill. “But because there are train tracks running through the marsh and derailments happen sometimes, it would be good to know the impact.” 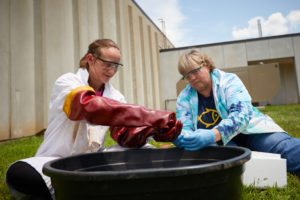 To mimic a potential spill, UWL graduate student Anna Hilger and her faculty mentor Bonnie Bratina, UWL associate professor of microbiology, set up containers outdoors where they introduced a mix of marsh water and sediment, as well as crude oil.

To mimic a potential spill, Hilger and her faculty mentor, Bonnie Bratina, UWL associate professor of Microbiology, set up containers outdoors where they introduced a mix of marsh water and sediment, as well as crude oil.

On a Wednesday afternoon in June, Hilger’s gloved hands were separating vials of this mixture inside an air-tight box to isolate the samples from oxygen while preparing them for testing.

She wants to understand if the microbes — under the stress of an oil spill — could continue to be drivers of important reactions in their environment. In a healthy environment, microbes contribute to processes such as oxygen production, evolution, symbiotic relationships and decomposition.

These processes have major implications for the cycle of life. For instance, during decomposition microbes produce methane, which causes dead plants or animals to break down and release nutrients that can be reused by other organisms. Without decomposition, dead animals, plants and waste would remain where they are, and nature would have less fuel for the living.

Hilger is just beginning the testing phase of her research and has yet to determine how resilient the marsh microbes will be to the oil.

Hilger first got hooked on studying microbiology as an undergraduate at UW-Stout where a passionate professor started most lectures with reasons why microbes were so cool.

Now Hilger is witnessing that through her graduate research and letting others know. As a teaching assistant at UWL, she has grown interested in becoming a professor herself. “It’s exciting to watch a student who is struggling with a topic eventually understand it,” she notes.

She has had great mentorship from Bratina, an environmental microbiologist who gives students flexibility to develop microbiology-related research in areas of interest.

Bratina’s own research is broad, from the microflora of aquatic slugs and ground squirrels to characterizing bacteriocins produced by Antarctic carnobacteria.

Bratina agrees the role of microorganisms in the world is overlooked. She reflects on words of the late microbiologist and renowned inventor of vaccines, Louis Pasteur, “The role of the infinitely small in nature is infinitely great.”