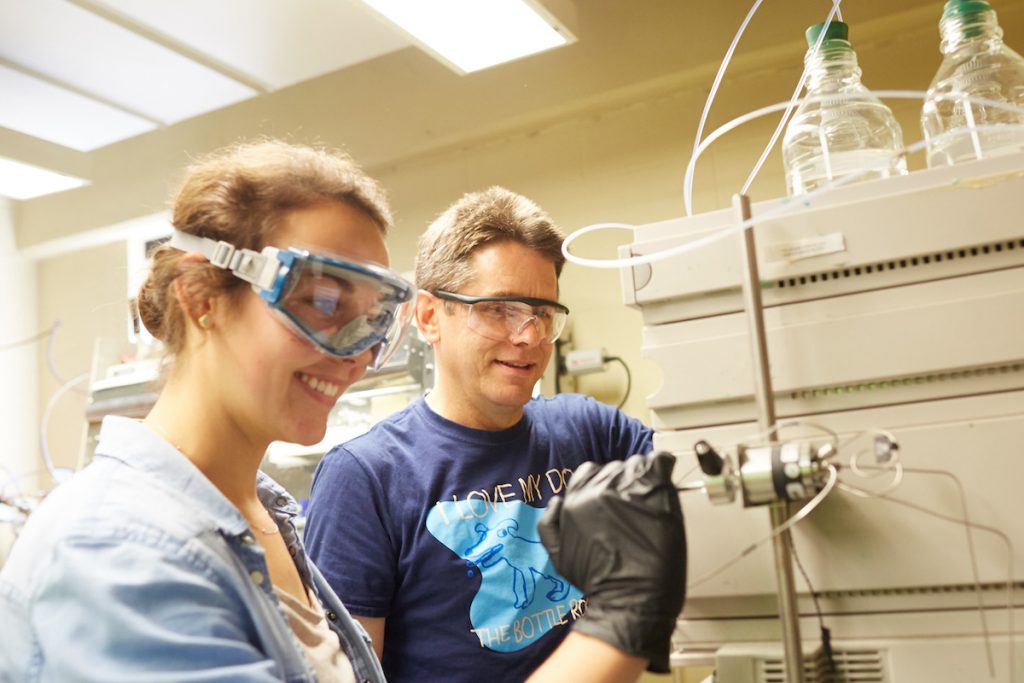 Robert McGaff, professor of Chemistry and Biochemistry, received the Innovator of the Year Award from WiSys Technology Foundation. Here he is pictured in the lab with Rachel Butler, one of his student research assistants.

McGaff, Chemistry and Biochemistry, received the Innovator of the Year Award from WiSys Technology Foundation for his research that is making Earth-friendly chemistry more commercially viable. The inaugural award goes to just one innovator each year from the 11 comprehensive universities and 13 two-year colleges in the UW System, as well as UW Extension.

“As a chemist, you really have the potential to do damage or to find ways to be a good steward of the Earth,” says McGaff. “As an environmentalist and a chemist, it seems natural that I would want to find ways of caring for the Earth through my intellectual pursuits.”

McGaff has earned three UW System Applied Research grants totaling $130,000 to do research on “green chemistry” or chemistry that doesn’t create any waste or toxic byproducts. WiSys now has one patent pending on his innovation — a suite of catalysts — that can be used to carry out oxidation reactions in a more environmentally-friendly way. Oxidation reactions are commonly used in business, primarily in the manufacturing of pharmaceuticals.

“He has a lot of innovative ideas and he is constantly looking for new things that might have some commercial potential,” says Arjun Sanga, executive director of WiSys Technology Foundation.

McGaff was awarded the grants after a review process each time by a committee of scientists and people in the business community. He won the grants from a pool of applicants from the 11-comprehensive campuses and 13 two-year colleges.

“There are certainly many worthy candidates throughout the UW System. His work over the last several years has stood out among his peers,” says Sanga. “Getting one of those grants is a really big honor — to do it three years in a row shows he is continually coming up with new ideas that are worthy of funding.”

Three years of WiSys grant funding has allowed McGaff to hire student researchers to work in his lab full-time on product exploration in green chemistry during summer months and part-time during the school year for three years. These microbiology, chemistry and biochemistry students are gaining hands-on experience while furthering the exploration of products that could potentially have commercial viability.

His students have been great problem solvers, and they have built a culture in his lab where they work hard and train each other, says McGaff. In particular, he credits student Rachel Neve, ’15, a former Wisys ambassador, who worked in his lab and far surpassed his expectations as a research assistant.

“The award is really the students’ award as much as it is mine,” he says.

Green chemistry avoids messy clean up often associated with chemical reactions by not using starting materials or solvents that will create a chemical mess in the first place. McGaff tests and discovers products used in chemistry that are safe for the environment, yet achieve a similar or better result than other products on the market. For instance, McGaff does not use solvents — substances that dissolve other substances — because they can be a source of ecological problems, he says. On the other hand, he does use simple hydrogen peroxide, which creates a clean byproduct: water. While testing products, he considers not only environmental sustainability, but also profitability.

“You can discover a lot of green ways to do chemistry, but, if no one adopts them, you won’t be able to have an effect,” he says. “You need to think about commercial concerns and making a profit.”

McGaff says partnering with WiSys Technology Foundation helped him better understand the business side of his research. WiSys is a non-profit organization that supports the UW System by helping identify innovative technologies and bring them to the marketplace. WiSys supports 11 four-year universities, 13 freshman-sophomore UW College campuses and statewide UW-Extension.

“They are unbelievably helpful,” says McGaff. “They will bend over backward to help you explore the commercial viability of the work you are doing.”

McGaff has disclosed inventions to WiSys twice. Both inventions had commercial potential. One patent is currently pending. The research has also resulted in a peer-reviewed, published manuscript, with a second accepted recently.

McGaff has been a strong advocate for the WiSys Ambassador program by working with and helping to recruit UWL students to become ambassadors.

McGaff received the Carl E. Gulbrandsen Innovator of the Year award at the ninth annual Wisconsin Science & Technology Symposium in early August at UW-Oshkosh. This is the inaugural year of the award, which is named in honor of a trustee who impacted WiSys since its creation.

Gulbrandsen was former managing director of the Wisconsin Alumni Research Foundation (WARF) who supported WiSys throughout his 16-year tenure. Since then, his leadership and support have been invaluable to the rapidly growing foundation, according to WiSys. Not only has WARF supported WiSys as an affiliate organization over its 16 years of existence, Gulbrandsen has guided the strategic direction of WiSys through his service as chair of the board of trustees for the first 14 years and treasurer for the past two years, according to WiSys.