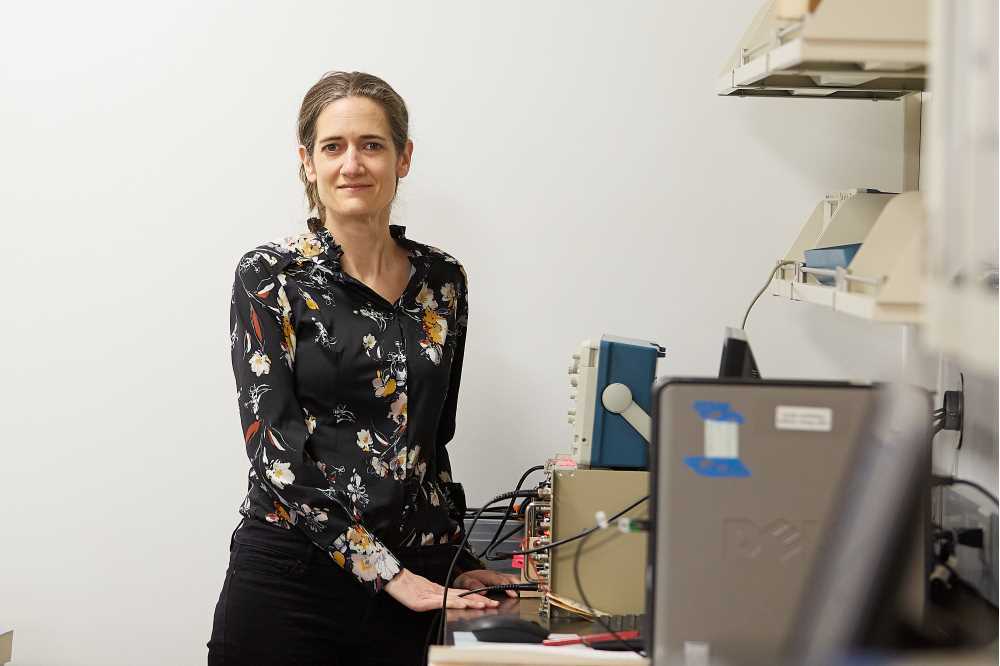 UW-La Crosse Physics Professor Shelly Lesher loves to talk about nuclear science. So much, in fact, that her unique approaches were noticed when she was awarded a prestigious Yale Presidential Fellowship at Yale University in 2019-20. Now she’s taking that interest online.

The past five years Lesher has taught a “Navigating Global Nuclear Issues” course at UWL to help students explore how nuclear science has impacted the world — everything from energy and science to art and culture.

Lesher, named a 2020 American Physical Society Fellow, says there’s a void when it comes to nuclear science in society. Often students ask why they weren’t taught about it.

“Why are scientists not taught the history of physics or about ethical scientific decision making?” she asks.

Lesher’s colleagues suggested she write a book about the issue. But, Lesher is quick to point out that she’s not an expert on everything nuclear.

“A podcast allows me to bring in experts to discuss different topics in the interaction of nuclear science and society,” she explains.

Lesher’s new podcast series — “My Nuclear Life” — explores the intersection of nuclear science and society through interviews with historians, policy makers and others. One of her first six episodes includes interviews with Richard Nephew, former principal deputy coordinator for the sanctions policy at the U.S. State Department and lead sanctions expert for the U.S. negotiating team with Iran on the joint Comprehensive Plan of Action. In other episodes, she interviews Richard Rhodes, Pulitzer Prize-winning author of “The Making of the Atomic Bomb.” Access the first season of six episodes for free at: https://mynuclearlife.com.

Lesher is excited how the series kicked off in December.

“I was able to interview experts in fields of nuclear sanctions, energy, history, environment, and medicine and ask them questions I have had or that were brought up in conversation,” she says. “It really is a dream to ask people you admire to come on the show, talk to you about a topic you both love, and then share it with others.”

Lesher says the podcast is geared toward those in the general public who are interested in history, science or learning something new. Topics covered are varied and have the theme of nuclear science in common.

“One podcasts discusses the start of radium therapy to treat cancer and another the beginning of the environmental movement in the U.S.” she notes. “You don’t have to be a nuclear scientist to understand these episodes.”

The podcasts have received positive reviews, and the initial programs are serving as good bases for potential guests.

“When I contact new guests they can listen to the show and see what it is all about and decide if they want to take part,” she says. “When a prospective guest listens and thinks it’s good, then I know I’ve done something right.”

Lesher says the onset of COVID-19 actually allowed her to kick off the podcast.

”Travel has been restricted and experts, who are usually traveling presenting talks all over the world, are now working from home and are available on Zoom to talk,” she says. “And they are happy to do it. It is a great community.”

Lesher is also excited that an undergraduate physics student has been key in producing the series. Lexie Weghorn, who had an interest in physics and society, researches topics and finds guest, and will soon take part in the conversations. Lesher hopes to keep student involvement in the program as part of the podcast in the future.

How to listen in —