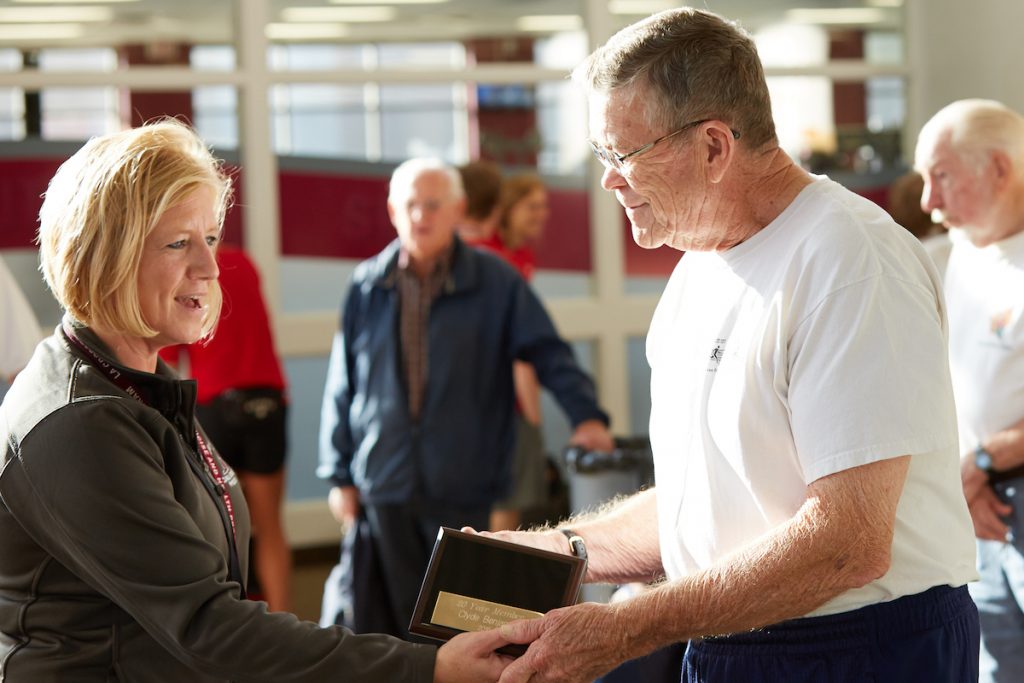 La Crosse resident John Zoerb vividly recalls when his heart attack hit 30 years ago. A heavy feeling came over him — like an elephant on his chest — as he sat alone in his business office at La Crosse Floral. Zoerb had enough strength to get up from his chair and drive himself to the hospital where his doctor informed him he was having a heart attack.

Zoerb recovered and his doctor recommended he start an exercise program. At the time, private gyms in the city didn’t exist, so the only options he knew of were at local hospitals.

“Sitting in class, you can learn the information, but, until you can apply it like this, it doesn’t really make sense,” says graduate student Kayla Schmitt, during one of her rounds at the REC.

Participants in the LEHP program need to be at least 18 years old. Some have known cardiovascular disease or positive risk factors for heart disease while others are simply trying to improve their overall fitness level. The program celebrates 45 years this year. Some long-term members of the program have been part of it for nearly that long.

Zoerb started the program 24 years ago.

“I haven’t had a heart attack since, and I don’t feel like my health is deteriorating at age 89,” he reports. “I can still hike and walk.”

In fact, Zoerb walks a mile each day during the program. He also does chair weights, and that’s just the beginning of his exercise routine. As to whether the university program has made a difference in his life, Zoerb says “I don’t know how I could exist without it.”

La Crosse resident Harold Flemke feels the same way. He discovered the program 15 years ago after having an aortic valve replaced. He recalls one of his caretakers said, “now don’t go home and sit on a recliner.” Flemke took the advice.

An unexpected perk of the program has been the socialization, he adds. In addition to meeting people while exercising, the program also has an annual picnic, golf outing and a holiday party every year.

“I’m 89, and I live by myself. It gets awful lonely at times,” says Flemke. “I look forward to being here.”

Moreover, he says the connection to young people keeps him younger. Students come around and check his pulse and blood pressure. They suggest exercises to adjust or change.

“Above everything else, I don’t know how they pick the students for this program, but they are fantastic,” says Zoerb. “They are helpful, friendly — and always smiling. They are the cream of the crop.”

Likewise, Schmitt, a first-year student in the program, says what makes it fun for her is working with participants, particularly those like Zoerb and Flemke, who have had a heart event and are on the journey toward better health.

“I like helping them achieve what they thought they couldn’t,” she says.

The LEHP program started in 1971 as a joint effort between UWL and the La Crosse County Medical Society. Representatives from both institutions felt that with their combined expertise, a medically-oriented exercise program could be developed to benefit area cardiac patients. The first exercise session took place June 6, 1971 with six patients and three attending physicians. The program has since grown, primarily by word of mouth, to include more than 150 active participants. It has also expanded to include people with other medical issues, as well as people with no known health concerns.

Participants must be at least 18 years old to participate. People can enroll at any time. The cost is $40 per month with discounted rates of $210 for a six-month membership and $350 for an annual membership. A spousal discount of 50 percent is available. Current and retired UWL employees also receive a 20 percent discount.
For more information contact the La Crosse Exercise and Health Program at 608.785.8683 or visit the program website. 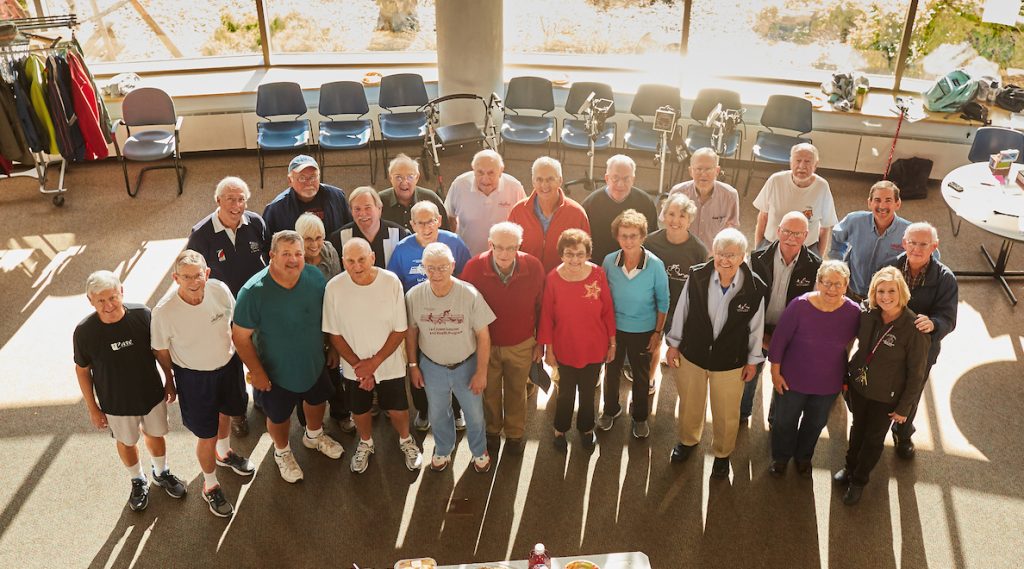 Long-term participants in the La Crosse Exercise and Health Program during an open house celebrating the program’s 45 years at UW-La Crosse. Kim Radtke, program director, is pictured at bottom right. John Porcari, the previous program director, is in the back row, far right.