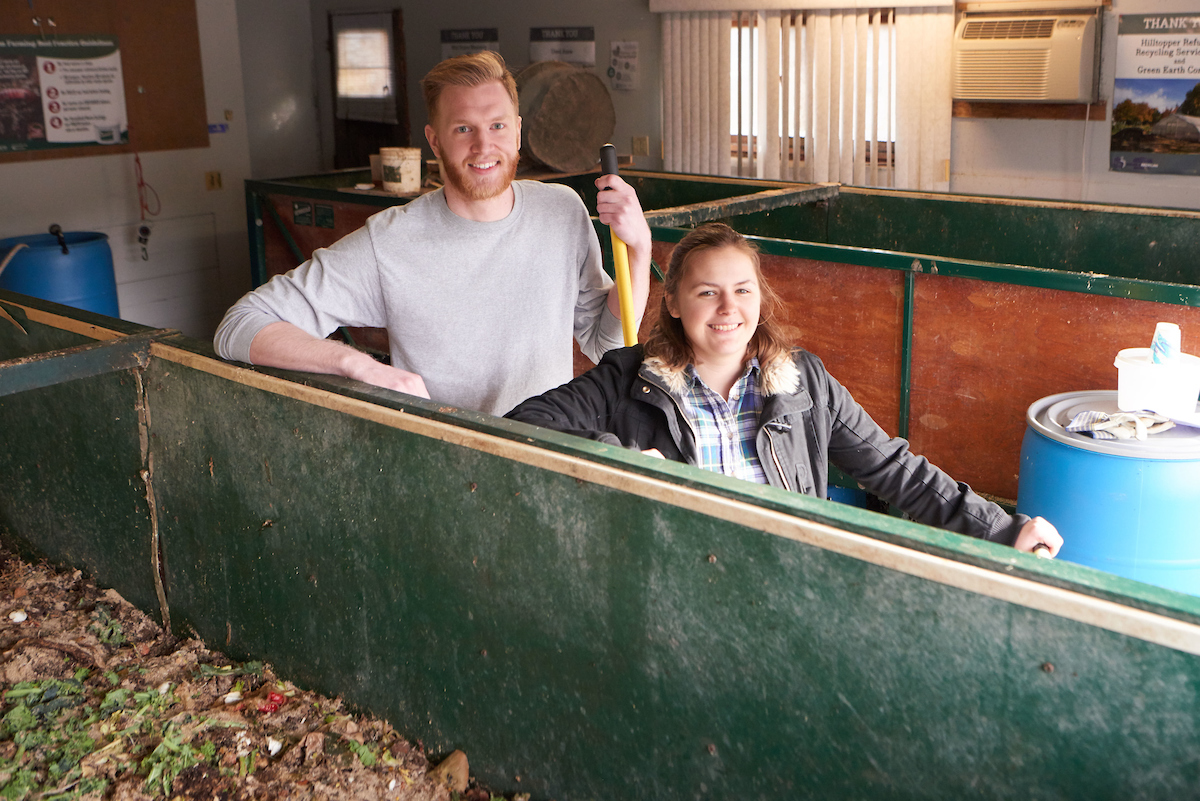 UW-La Crosse student Jeremy Shimetz and alumna Andrea Schaefer, ’16, stand by the vermicomposter, a 5 x 4 x 32-foot box that is home to tens of thousands of worms. Only pre-consumer food waste is added to the pile.

Shimetz dumped loads of egg shells, vegetable shavings and fruit peelings into a vermicomposting system, an industrial sized flow-through composter, filled with tens of thousands of worms. The worms feast on the scraps. Their excrement settles to the bottom of the container where it is collected as a nutrient-rich natural fertilizer. Bags of “VermiGold” are then donated to community garden projects and sold at various local spots in La Crosse.

Since the vermicomposter was purchased in 2010 about 47,000 pounds of food waste have been diverted from the landfill while creating about 10,000 pounds of high value compost. The composter, now owned by Mayo Clinic Health System – Franciscan Healthcare, continues through a partnership among UWL, Mayo Clinic and Hillview Urban Agriculture Center. Western Technical College, People’s Food Co-op, and Cool Beans Coffee Shop also contribute food waste and coffee grounds for the composter.

On a warm March day, Hillview staff open the doors of the small garage on Ferry Street where the vermicomposter is housed. The air is thick, moist and filled with smells of rich, organic matter. 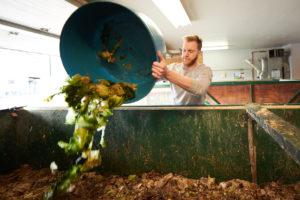 UWL Senior and Vermicomposting Intern Jeremy Shimetz collects more than 400 pounds of compost a week from both UWL’s Whitney Center and Mayo Clinic Health Systems to feed the worms.

“The earthy aroma takes awhile to get used to,” notes Shimetz.

Shimetz found out about Hillview’s mission — creating a healthy community through a local, sustainable and accessible food system— through a friend who worked there. He had to get involved.

“I think it’s a great cause,” he says. “I like the way Hillview gets the community involved, and provides a means for sustainable and healthy eating.”

Andrea Schaefer, a 2016 UWL graduate is Hillview’s vermicompost coordinator. She also became interested in Hillview’s mission as a student. She was a nutrition intern for Hillview, a position she landed through Biology Lecturer Kristin Greany. That position led to her current position with the organization after graduation, which entails maintaining the vermicomposter, as well as educating the community about the center and vermicomposting system.

Schaefer says she likely would not have made the community connection to Hillview without her UWL connection. And Hillview has given her an opportunity to connect with many more people with similar interests in gardening, composting and sustainable living.

“This has been one of the best things to come from my university education,” she says.

In addition to providing opportunities for UWL students and graduates, the vermicomposter saves the university money by sending less garbage to the dumpster while building on UWL’s commitment to environmental sustainability, says Larry Ringgenberg, UWL director of University Centers. 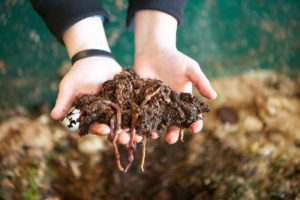 Tens of thousands of worms are used in the vermicomposting system to turn food waste into valuable fertilizer.

The vermicomposter was originally funded through UWL’s Green Fund. It was later sold to Mayo Clinic. UWL’s continued involvement in the composting project is the result of many UWL people being dedicated to making it a greener campus, says Ringgenberg.

“The entire institution is always doing something to foster how we interact with our environment,” he says.

So far pre-consumer food scraps from UWL’s Whitney Center are being collected. Ringgenberg says the goal is to expand the project and eventually collect from other dining areas on campus.

Last year a 6,497 pounds of food waste was diverted from the landfill because of the vermicomposting partnership.