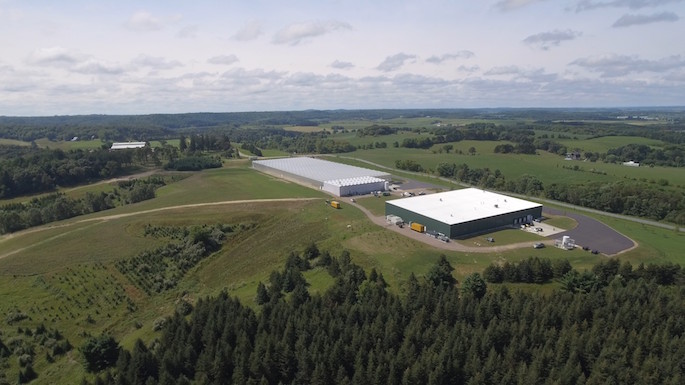 About a dozen UW-La Crosse (UWL) faculty toured Superior Fresh last summer and some have already started working on projects for the cutting-edge company. The startup in Northfield, Wisconsin, sits on a 720-acre native restoration property. Photo courtesy of Superior Fresh.

UWL students are getting a hand on the future of food growing.

In a biology lab, students spent fall semester nurturing lettuce leaves from seedlings in dishes of water. Biology faculty Anita Baines and Tom Volk led the class in figuring out whether an additive in the growing process was worthwhile. Their research would help answer questions for a startup company exploring the frontiers of food growing — without soil or consistent sunlight — in a facility about 70 miles to the north. 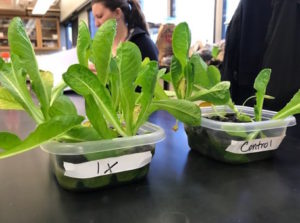 Associate Professor of Biology Anita Baines and Biology Professor Tom Volk had their class conduct a study to determine if an additive — a particular mix of microbes that improves plant growth — would be worth the investment for Superior Fresh. Their work was conducted fall semester.

Superior Fresh is an aquaponics facility just outside of Northfield, Wisconsin, that officially opened in August 2017. The business is the largest of its kind in the world; it sits on 720 acres and employs a cutting-edge method of fish farming and water-based gardening. Waste from Atlantic salmon and rainbow trout supplies nutrients for lettuce, which is grown hydroponically. The result is a quality product for sale, virtually zero waste — and plenty of food for thought.

“Our owners want to prove that this sustainable model is viable and show the world we can get local, healthy, sustainable and organic food to everyone,” says Kurt Wagaman, general manager of Superior Fresh.

Wagaman says it’s only natural that Superior Fresh would want to partner with universities nearby.

“We could send samples off to other labs, but we enjoy being able to be part of the learning process,” he says. “All it takes is one student who says, ‘I’m going to do this and become the next innovator in something huge.’”

Superior Fresh has already hired one such student, UWL alumna, Kelsey Kotecki, now a lab technician in the company’s fish house. And Superior Fresh has also connected with more than a dozen UWL faculty members so far in subject areas from microbiology to entomology to business.

2017 Science Career Forum. This year’s forum was Friday, Feb. 2, in the UWL Student Union. During the forum, Scott Cooper, UWL biology professor and director of Undergraduate Research, discussed the many ways faculty can get students involved in projects with off-campus partners. “I think we have a lot more untapped potential for this,” says Cooper. “Once we started talking to Superior Fresh, all kinds of options for research emerged.”

UWL’s collaborations with Superior Fresh started when Scott Cooper, UWL biology professor and director of Undergraduate Research, connected with Wagaman during the campus Science Career Forum last year. The annual event aims to help UWL students discover lab science-related careers and internships in the region. It is also a recruiting opportunity for employers.

“At that time we were looking at staffing Superior Fresh and we needed the right players involved,” says Wagaman. “We thought, ‘why not go and see what some of the best of the best look like?’”

But the opportunities he found at UWL extended beyond hiring. Cooper and Wagaman got to talking about potential partnerships.

“I thought they were a very novel company — setting up aquaculture and hydroponics,” says Cooper. “And the company fits in with a lot of the green initiatives that I think many of our science students are interested in.”

About a dozen faculty toured the Northfield facility last summer and some have already started working on projects. Xinhui Li, assistant professor of microbiology, tested food and environmental samples for pathogens this summer to assist with the company’s food safety standards.

In Baines and Volk’s Plant/Microbe Interactions class, students worked through the scientific research process starting with answering a real-world question and ending with a presentation of the results to a client. Cooper says that kind of hands-on experience helps students apply knowledge they are learning in class.

Sabrina Aspenson, a UWL graduate student in biology, says in addition to exposing her to hydroponics — something she knew little about before, the class project also provided a broader experience for her potential future doing lab research. “This experiment was all conducted through the students, including experimental design, running the tests and measurements, and doing the statistical analysis,” she says. “These are all useful tools to be able to do in the science world.”

The Northfield facility is situated on a 720-acre native restoration property in the Coulee Region. The company started five years ago and harvested the first head of lettuce in July. Todd Wanek, president and CEO of Ashley Furniture, and his wife, Karen Wanek, are the owners. Learn more.