Centennial Hall is one of several buildings at UW-La Crosse that was built to green building certification standards, Leadership in Energy & Environmental Design. UWL’s commitment to green building design and energy efficient updates across campus have resulted in lower energy use and budget savings.

UW-La Crosse’s energy consumption in 2015 was 12.7 percent lower than a decade ago.

That’s according to a Wisconsin Department of Administration report that summarizes annual energy use in all state facilities. The report sets fiscal year 2005 as a baseline and makes adjustments for weather and total campus square footage.

Because of UWL’s dedication and performance in energy efficiency and renewable energy, the university was given one of about 60 awards worldwide this fall from the Association of Energy Engineers, a non-profit professional association with more than 18,000 members.

Energy consumption is measured in British Thermal Units per Gross Square Foot (BTU/GSF). A BTU is the amount of work needed to raise the temperature of one pound of water by one degree Fahrenheit. In 2005 the total adjusted BTU/GSF at UWL was 150,442. 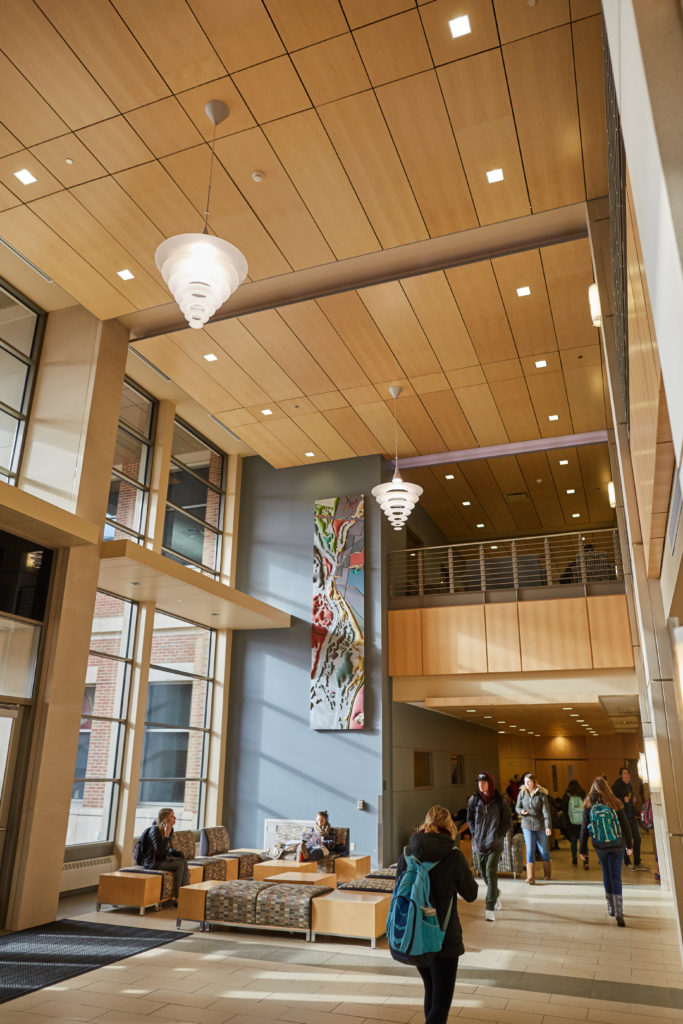 A combination of high efficiency lights and natural light have reduced energy consumption in Centennial Hall, UWL’s academic building. In this picture the wall mounted sconce lights and the numerous recessed ceiling lights in the two-story gathering area work with the natural light sensors and timers to allow a large area to be lit while consuming less energy.

Specifically, UWL’s Facilities, Planning and Management office has shown a strong commitment to finding opportunities to save on energy and budgets, whether through new green building designs or modern, energy efficient updates to lights, water heaters, faucets and more.

UWL’s new buildings such as Centennial Hall academic building, Eagle Hall residence hall and the new student union — are built with sustainability and energy efficient designs that meet the national green building certification standards of Leadership in Energy & Environmental Design (LEED). Features such as natural lighting and white rooftops translate to less energy to light and cool buildings. LEED building are about 25 percent more energy efficient than a comparable new building constructed at the same time but not built to LEED standards, says Sweetman.

Multiple energy-saving projects across campus have also translated to budget savings. Examples include:

“Facilities, Planning and Management will continue to enhance building systems and operations to reduce UWL’s impact on the environment, demonstrate a commitment to sustainability and reduce the impact of energy costs on operating budgets,” says Sweetman.

About the worldwide energy award

UWL won the Association of Energy Engineers Region III Institutional Energy Management Award for 2016 from the Association of Energy Engineers. The award is the result of collaborative efforts of the state, UWL community and the daily work completed by Facilities, Planning and Management that saves energy through operational activities and innovative designs. The award was presented this fall at the 39th World Energy Engineering Congress in Washington, D.C., the largest energy conference and technology expo held in the U.S.