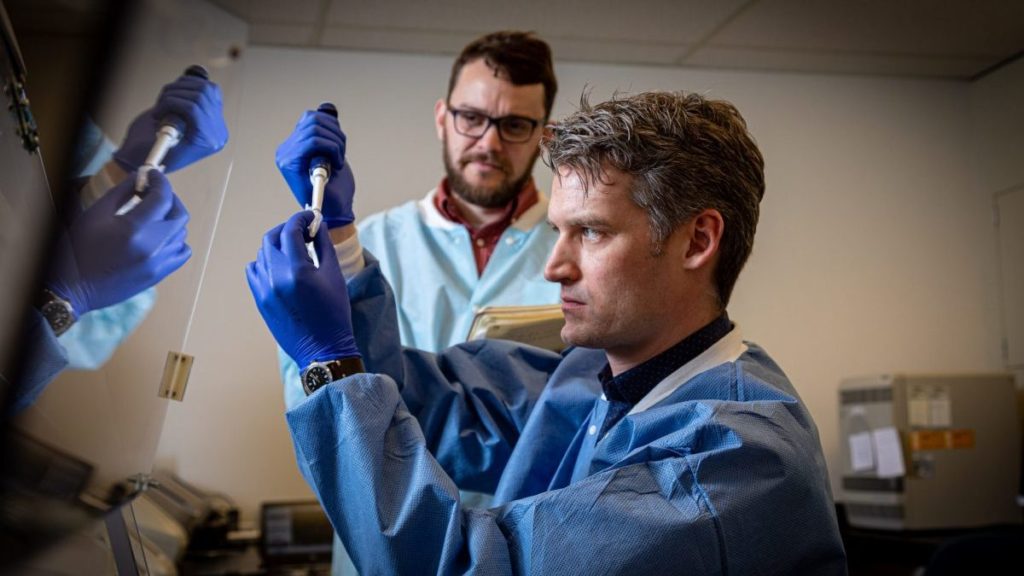 A UW-La Crosse alumnus is on the front lines of an effort to understand — and ultimately defeat — the virus that causes COVID-19.

Peter Thielen, 2005, is a molecular biologist at the Johns Hopkins University Applied Physics Laboratory in Laurel, Maryland. As millions of Americans work from home, seeing little reason to change out of their pajamas, Thielen toils away in a lab coat and gloves, working to sequence the genome of the SARS-CoV-2 virus.

“When a sample comes through and is diagnosed for SARS-CoV-2, the virus that causes COVID-19, we take the remainder of that sample and sequence the entire genome,” he explains. “We’re looking at tests from as many patients as possible, so we can observe genome mutations and track the evolutionary changes that occur when it passes through large numbers of people.”

According to Thielen, early results show that the SARS-CoV-2 genome has only a small number of mutations since it was first identified in China late last year.

The version on the U.S. West Coast appears to have been imported by a traveler from China, while versions on the East Coast likely originated in Europe. It’s an important distinction, Thielen says, because this information is used to establish public health responses such as the social distancing guidelines in place nationwide.

Thielen’s task is to sequence as many SARS-CoV-2 genomes as possible, so that researchers can better understand the virus’ genetic diversity and develop an effective vaccine. As fast as teams are working, such a vaccine is still a year or more away, experts predict.

But here’s the good news: Because SARS-CoV-2 is mutating more slowly than viruses like influenza, it may take only a single vaccine to prevent it. In this way, SARS-CoV-2 would be more like chickenpox and less like the flu.

“At this point, it is unlikely that a seasonal vaccine would be required,” Thielen says. “But the only way we’ll know for sure is if the scientific community performs the proper clinical trials.”

Thielen views SARS-CoV-2 as a serious problem, but not the kind of once-in-a-century virus that many are making it out to be.

A lot of people are comparing it to the 1918 Spanish Flu, “which was very destructive and had a high mortality rate,” Thielen says. “But just a few years ago, we had Zika. A few years before that, we had Ebola. And a few years before that, we had H1N1. These kinds of events happen all the time internationally, and the speed (with which) we respond to outbreaks is incredibly important. This is as busy as it gets for us.”

Meanwhile, back in La Crosse, Anne Galbraith says the world is fortunate to have someone like Thielen working on its behalf.

Galbraith, an associate professor of biology at UWL, worked with Thielen in both the classroom and her research lab when he was an undergrad. A decade and a half later, she has only positive things to say about him.

“I remember Pete as just a good, smart, funny person, and he’s clearly moved up the ranks to where he is now,” she says. “I know a lot of people are suffering and will suffer because of the virus, but it makes me happy to know that someone like Pete is out there helping battle this.”

Galbraith says there are many other UWL alums making a difference, too.

“I know students who have gone on to become doctors and other health care providers, who are doing the dangerous work of treating patients,” she says. “There’s a whole bunch of UWL alums who are all over the front lines on this.”

For his part, Thielen says his time at UWL was a major component of his future success. When he finished his bachelor’s and started grad school, he came to appreciate his UWL education even more.

“The experience I had in La Crosse, compared to peers I worked with immediately out of undergrad, was unparalleled,” he says. “Working with Dr. Galbraith prepared many of us to be the best possible clinicians and scientists responding to the current pandemic. This is a testament to her positive impact on our lives and a clear representation of her lasting legacy.”