Kevin Potter stands in his office on the eighth floor of the Wisconsin Department of Justice overlooking the capitol. From a shelf filled with UW-La Crosse football memorabilia, he grips a coffee mug with a picture of himself and three other teammates in UW-L jerseys. The picture is from one of the years they won the conference championship under legendary Coach Roger Harring.

“You don’t always appreciate some of the things coaches imparted on you, but looking back you realize how smart they were,” says Potter, a 1977 graduate. “They’re not just teaching you about football, they’re teaching you about life.”

Principles he learned from Harring — teamwork and camaraderie —apply to the team of prosecutors he manages today within the WDJ’s Division of Legal Services.

“When you have a private practice, you can represent one person and work for their interest. But when you are working here, you are working for the citizens of this state,” says Potter. “You need to be part of a team benefiting the whole.”

Prosecutors on Potter’s team come together to score their own kind of touchdown. They have to piece together a collage of evidence, testimony and background interviews to find what is just — and then do what is right.

It sounds simple, but Potter and his staff say the line between what’s right and wrong isn’t always clear. Finding the truth requires collaboration. Three UW-L alums and WDJ attorneys — David Wambach, ’81, Tara Jenswold, ’95, and Michael G. Schaefer, ’84 —  regularly work with local law enforcement and district attorneys around the state to prosecute criminal cases with the goal of seeing that justice is done.

Working for justice in Wisconsin

Sometimes finding what is true and just requires sleepless nights and a lot of questions from national news media. Wambach, an assistant attorney general with WDJ, attracted cameras from “48-Hours Mystery” while digging up the 30-year old Marilyn McIntyre Cold Case.

McIntyre, 18, was murdered on the morning of March 11, 1980, while her three-month old baby slept nearby. The jury found Curtis Forbes, a long time family friend, guilty. Wambach’s dedication to solving the case earned him the 2011 Wisconsin Association of Homicide Investigators Prosecutor of the Year award.

But McIntyre debates whether it was his toughest case. That title likely goes to an investigation where he had no crime scene or forensic evidence. He was tasked with proving that a young man — Derek Nicholas Anderson  — killed his family on the Fourth of July weekend in 1998 in Jefferson County and buried the evidence 800 miles away in remote North Carolina woods. He first had to convince the jury that the crime actually took place in Wisconsin.

He called the case an “uphill battle,” but, in the end, “extremely satisfying” because he was able to do justice by putting the son behind bars.

“There are two sides to justice,” notes Wambach. “You take people who created horrible, heinous offenses and see that they are held accountable, and, on the other end, you are making sure only someone who should be charged is.” 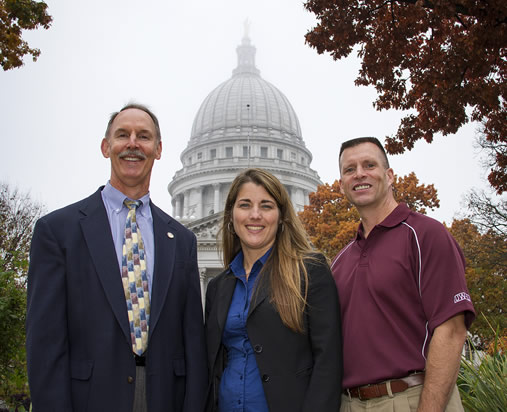 A team of UW-La Crosse alumni works to serve the people of Wisconsin in the Wisconsin Department of Justice. They include, from left, Kevin Potter, class of ’77, Tara Jenswold, class of ’95, and David Wamback, class of ’81.

But when the offenses aren’t “horrible” or “heinous,” justice becomes a bit more blurry. In the vehicular homicide cases that UW-La Crosse Alumna Tara Jenswold prosecutes, some of the defendants are careless in ways we’ve all been at least once. They text while driving, speed or don’t pay attention for a brief moment on the road.

“The victims of these crimes are, for the most part, truly innocent, in the wrong place at the wrong time,” she says.

She prosecuted a landmark case this summer involving a Sun Prairie woman who a jury found was criminally negligent for texting as she drove, causing her to hit and kill a UW-Madison student in 2010. Jenswold’s case was the first time someone in Wisconsin was convicted of homicide by texting and driving, and one of only a handful in the U.S.

Working for the people

“There isn’t a day that doesn’t go by that I don’t think about the victims,” says Jenswold. “That’s what motivates me. That’s why I work 90 hours a week during a trial.”

Wambach recalls the 11-year-old victim he called up to the stand to tell the jury her stepfather had murdered her mother. That was 16 years ago, but Wambach still vividly recalls the crime scene and the young girl who saw justice when the trial was over and her stepfather was put behind bars for life. Throughout those 16 years Wambach has kept in touch with that young girl, now a mother of three with a nursing degree.

“How rewarding that is to make that kind of positive difference in someone’s life,” he says. “There are attorneys who make six figures, but I don’t think they’ll ever have that kind of satisfaction.”

Successful results don’t just happen. A case with holes won’t be prosecuted, says Potter. The team needs to work together — just like he learned on the UW-L football field.