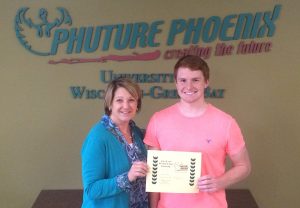 For the 2016-2017 school year, Phuture Phoenix is slated to award scholarships to 40 students, totaling nearly $70,000. This figure includes the inaugural awarding of the John M. and Meredith B. Rose Phuture Phoenix Scholarship, worth more than $8,600 and renewable annually, to Joshua Vollmar from Suring, Wis. Vollmar is a Human Biology major and plans on entering the medical field in the future. Vollmar attended the Phuture Phoenix fifth-grade field trip as a Suring Elementary School student in 2007, and he wrote about his Phuture Phoenix field trip experience in his scholarship application as a reason he chose to attend UW-Green Bay over other universities.

In addition, nearly 200 current UW-Green Bay students have participated in Phuture Phoenix programming and are on track for graduation over the next four years, with nearly 40 more freshman planning to attend UWGB in Fall 2016.

In 2002, Cyndie Shepard — wife of former UW-Green Bay Chancellor Bruce Shepard — and Ginny Riopelle — longtime UWGB advocate and member of the Chancellor’s Council of Trustees — had an idea: launch a pre-college program that provides opportunities for students from underrepresented and disadvantaged backgrounds to believe post-secondary education is important, attainable and available.

The very next year, in 2003, hundreds of Green Bay area fifth graders visited the UW-Green Bay campus for a field trip.

Phuture Phoenix: rising from the ashes: Theresa Rock, ’15, was one of those fifth-graders experiencing a college campus for the first time. In fact, because of the fourth grade and fifth grade split class to which she belonged, Rock visited UWGB twice, in 2003 and 2004, as a student of nearby Nicolet Elementary. And for as much as she enjoyed the back-to-back trips to campus, Rock most remembered the connections she made with her UWGB role models nearly 13 years ago.

“I loved arriving on campus. It was absolutely beautiful,” says Rock, “But I really remember the UWGB students visiting us during recess and playing with us. That’s the most important part of Phuture Phoenix: the connections we made to all of these really cool college students. I totally looked up to them.” Phuture Phoenix, by the numbers:

And it all started with a field trip.