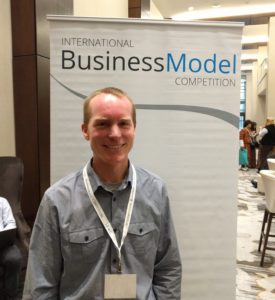 UW-Green Bay student entrepreneur Sam Hunt’s The Local Food Experiment won the state’s Wisconsin Big Idea Tournament (WBIT), sponsored by WiSys. The win earns Sam $2,500 and a trip to compete at the International Business Model Competition in Provo, Utah, May 10-11. At the international competition, Sam was up against teams from Harvard, Iowa, Michigan State, Tulane, Quinnipiac, Mississippi, and BYU, as well as from Mexico, Chile, Canada, Peru, Brazil, Cambodia, Japan, Jamaica and India. He was a semifinalist in the international competition, earning $3,000.

Sam’s The Local Food Experiment was an at-large entry to the WBIT through the Innovation in Aging event this year. The Local Food Experiment placed second at last year’s UWGB Student Business Idea Contest, won a student business award this year at Force for Positive Change in Milwaukee, pitched in “The Pitch”  (https://thepitchfoxcities.com) last year against other Northeast Wisconsin colleges, and has presented at 1 Million Cups Green Bay (www.1MillionCups.com/GreenBay) and various other community events.

Sam is also the inventor of PrecisionLAG (see video), a golf swing training aid. With that invention he won this year’s UWGB Student Business Idea Contest and earned a STEM in Business Award from WiSys, placed third at this year’s “The Pitch,” and is a graduate of the second ever cohort of the gBETA Northeast Wisconsin free accelerator program, recently presenting at their LiveBETA event in April.

For more information on and photos from the WBIT and The Local Food Experiment’s win, see WiSys’ press release about the tournament’s results and WiSys’ Facebook page, where you can also see UW-Green Bay’s team from startup Stability competing.