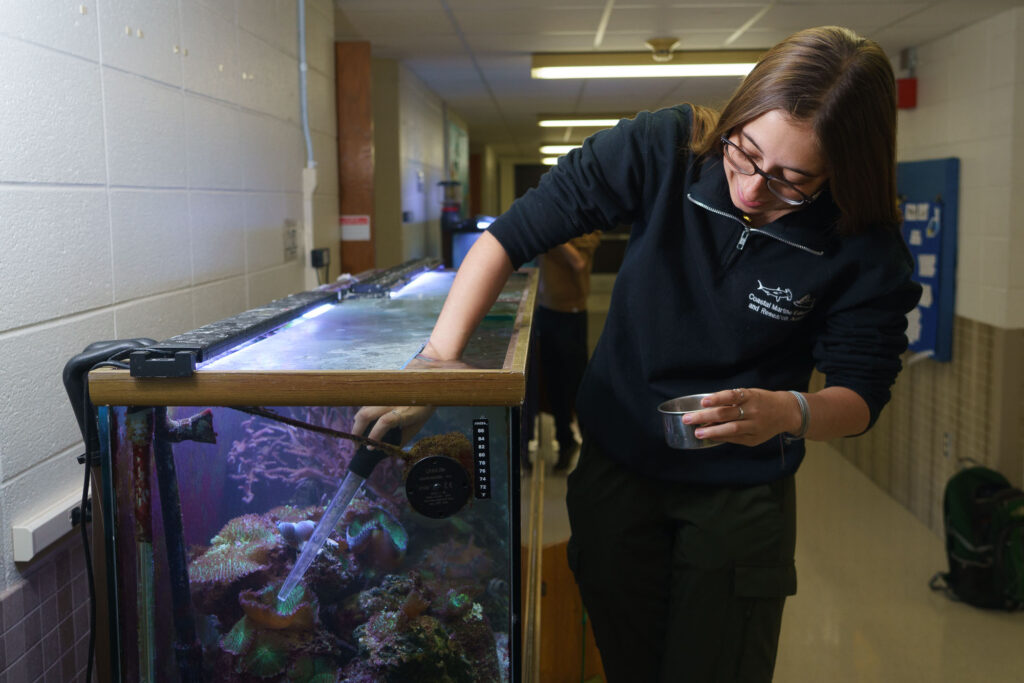 Alaina Steinmetz and other members of UW-Eau Claire’s Reef Team student organization meet several times a week in Phillips Hall to maintain two large saltwater tanks and care for the organisms that live in them. Steinmetz has long been fascinated by marine life, so she was happy to discover Reef Team when she came to UW-Eau Claire. (Photo by Bill Hoepner)

Several times a week Alaina Steinmetz, Lucas Williams and others who share a passion for all things that live in the ocean gather to observe and learn from clownfish, urchins and other marine life they find interesting.

A group of friends enjoying an oceanside adventure? Nope.

They are University of Wisconsin-Eau Claire students who care for and learn from the starfish, blue tang and other ocean-dwelling creatures that live on campus in two 125-gallon tropical saltwater aquaria in Phillips Hall. 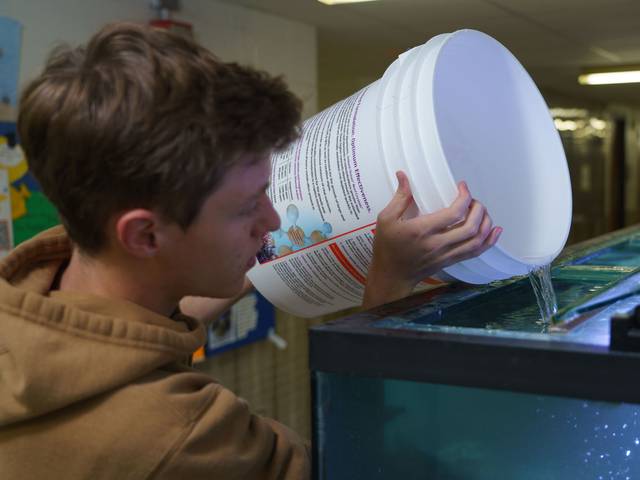 Lucas Williams says being part of Reef Team is a great learning experience and a fun way to get to know other students who share his passion for ocean-living creatures. (Photo by Bill Hoepner)

Steinmetz and Williams lead the university’s Reef Team, the student organization that tends to the tanks and the organisms that live in them.

“Reef Team is a super fun opportunity with a lot of cool people to meet and organisms to take care of,” says Williams, a junior biology and neuroscience major from Eagan, Minnesota, who is the Reef Team’s vice president.

The two tanks are on-campus “living laboratories,” says Dr. Jenn Smith, the assistant professor of biology who is the Reef Team’s faculty advisor.

“They offer insights into an otherwise hidden world, inspiring students to wonder about and appreciate the world’s oceans as well as their inhabitants,” Smith says. “It is amazing to think one could come to UW-Eau Claire and ‘find Nemo’ on the way to class or just to visit him between studying to promote his well-being.” 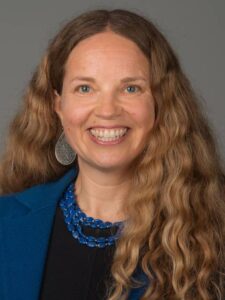 The aquaria will be used in Smith’s newly created animal behavior course this spring for students to observe animals in action.

They also are used to supplement the biology curriculum by allowing students to view biological interactions among species, such as the classic clown fish and sea anemone mutualisms, Smith says.

Steinmetz, a junior environmental geology major from Chippewa Falls, was a young girl when she became interested in marine life during a visit to Captiva and Sanibel islands in Florida. Since then, she’s been “blessed” with opportunities to participate in summer camps and research on the islands.

“So, I was extremely happy to discover Reef Team, which allows me to be in touch with my marine roots,” Steinmetz says. “After I graduate, I hope to continue working in marine science in some way or another. Being a part of Reef Team has given me the confidence to work directly hands-on with fish and smaller marine life.”

As a Blugold, Steinmetz also has found several other “real-world” experiences involving marine life. For example, she spent time in Florida helping to tag stingrays and sharks as part of a research project. Those experiences make her work with Reef Team even more interesting, she says.

‘Cool’ things to see and learn 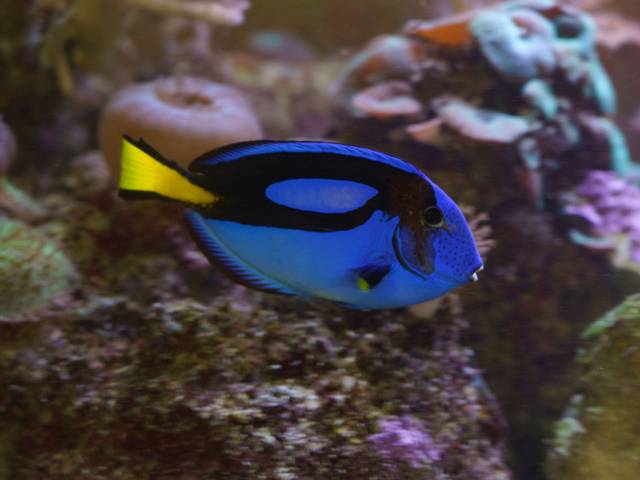 Luna the blue tang is one of the tank’s “most popular organisms.” (Photo by Bill Hoepner)

Williams says the tank’s “most popular organisms” are the clarkii clown fish they call Clarky, a blue tang that goes by Luna and an urchin named Ozzy.

“We have a lot of other cool things people can see if they look in the tanks a bit harder as well, such as a brittle starfish, a coral banded shrimp and various hermit crabs,” Williams says.

While she enjoys them all, Clarky the clownfish is her favorite, Steinmetz says, adding that his personality won her over.

“Clarky loves to nibble on my bracelets and recognizes me when I feed him — or at least that is what I like to think,” says Steinmetz, who is president of Reef Team.

The tanks are a good representation of the ecosystems of certain parts of the ocean, Williams says. Tank 1 is more of a coral reef environment with clown fish and various corals, while tank 2 represents a more shallow and bare area with smaller fish and invertebrate organisms, he says.

Taking care of the tanks helps Reef Team members learn about some common issues with tanks and how to resolve them, Williams says. Some of those lessons also can apply to the ocean, he says.

“We are responsible for checking the levels of things that could harm the tanks if they are unhealthy, such as ammonia or nitrates, and water swapping by siphoning dirty water out of the tank and creating clean salt water to replace it,” Williams says. “Doing so keeps the tanks healthy. We also feed the fish and the mushroom corals brine shrimp during our meetings.”

Students involved in Reef Team also have additional opportunities to connect with faculty, which can lead to research and other learning experiences on campus or in other parts of the world, Williams says.

However, the best part of the Reef Team is working with live organisms in an environment not typically found in Wisconsin, Williams says.

“Nowhere else can people really get hands-on experience with marine life in Wisconsin, so this is a unique opportunity,” Williams says. “It will be an important thing to have on our resumes and to use in our jobs in the future.”

A community of scholars

Smith, who joined UW-Eau Claire faculty this fall, is impressed by the work students do to maintain the tanks so well. She appreciates being part of a “community of scholars that share my passion for marine ecology.”

“The biology community — students working in collaboration with faculty — have nourished these living reefs for several decades now and their teamwork is outstanding,” Smith says. “That is quite a testament to the dedication and passion of this unique group of individuals all working together toward a shared goal.”

The number of students who are part of Reef Team tends to fluctuate each semester, from a high of about 20 students at the start of a semester to around eight who participate regularly once the semester gets busy, says Steinmetz, noting that four Blugolds typically maintain the tanks in the summer and during campus breaks.

Williams says that any student with an interest in marine life — no prior experience necessary — can join the Reef Team. New team members typically catch on quickly when the more experienced students show them what to do, he says.

While Reef Team is a student organization, Williams says students who participate regularly can fulfill their service-learning hours by managing team projects, such as creating promotional materials or updating the group’s social media.