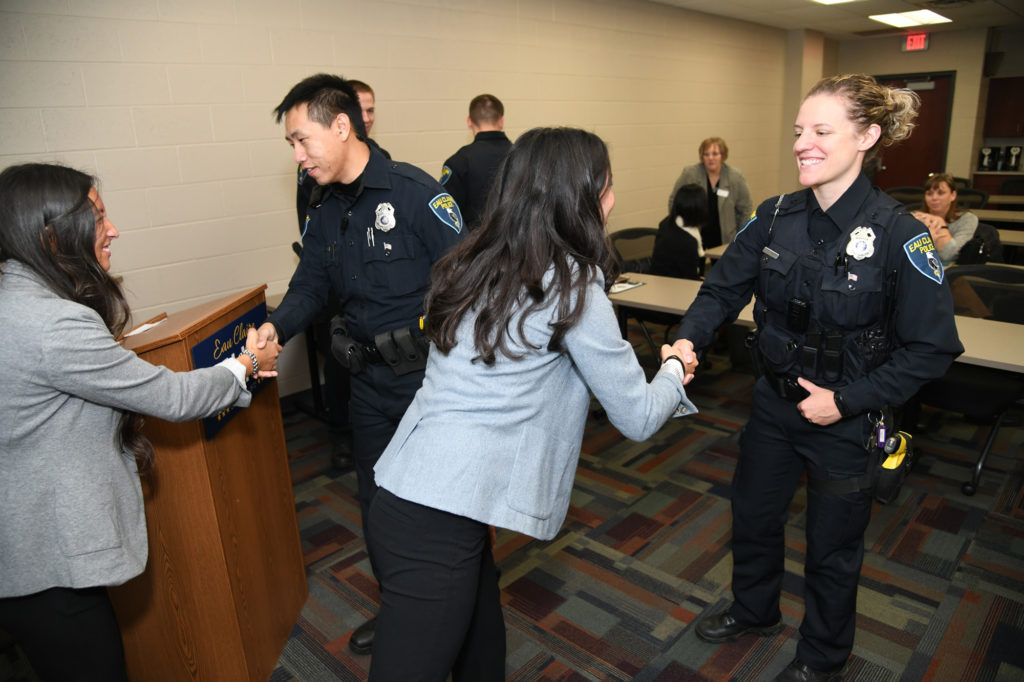 The Eau Claire Police Department is making a significant change to how officers carry their equipment after a UW-Eau Claire research team determined that load-bearing vests are a safe and healthier alternative to the traditional duty belt.Officers who carry most of their equipment — which often weighs close to 30 pounds — on vests rather than duty belts experience significantly less hip and lower-back pain, the study found.“The findings are clear and they are significant,” said Dr. Jeff Janot, a professor of kinesiology and the faculty lead on a six-month study that involved UW-Eau Claire, ECPD and Mayo Clinic Health System. “While the vests weigh more, the weight is more evenly distributed so there is less strain on the hips and lower back.”

“We didn’t find any unintended consequences from wearing the load-bearing vest that would cause health or safety issues for the officers,” Bougie said.

Given the study results, the ECPD already has begun to transition some of its 100 sworn officers from the duty belts to the load-bearing vests, said Matt Rokus, deputy chief of police for the ECPD.

“The health and well-being of our officers is our priority,” said Rokus, noting that lower-back pain is a significant health issue for law enforcement personnel everywhere. “This study shows empirically that transitioning to the load-bearing vests is the right thing to do for our officers and our community.”

ECPD officers still will wear duty belts, but they will hold only guns and tasers. The radio, hand cuffs, flashlight and other gear officers always have on them will be carried on the vests instead, Rokus said.

After every shift, the officers self-reported and self-recorded any discomfort and rated the level of lower-back discomfort, giving researchers extensive data from a six-month period.

The 15 officers who participated in the study already have been issued their vests and began wearing them immediately. The research partners in the study — UW-Eau Claire, the city of Eau Claire and Mayo Clinic Health System — shared the costs of the 15 vests being used by the officers who volunteered to participate in the research. As funding allows, the ECPD will purchase additional vests so every officer will have one, Rokus said, noting that vests cost $300 each so it will take some time to purchase them all.

All officers go through extensive use-of-force training, which results in muscle memory that they rely on when accessing their equipment. As officers transition to the vests, they will be retrained to create that same reflexive response, Rokus said.

“This is a significant investment given the costs of the vests and the training,” Rokus said. “It’s an investment we will make because we have the information from UW-Eau Claire’s research to support our decision. We know this is good for the health of our officers.”

That’s good news for Cory Reeves, who said that after five years as an officer with the ECPD he’s already experiencing hip and lower-back pain from long hours of sitting in his squad car, walking his beat or apprehending suspects, all while carrying the heavy gear around his waist.

“As soon as I put the vest on, I noticed the difference,” said Reeves. “I wore the duty belt the first three months, and noticed an immediate difference when I put on the vest for the last three months. It’s a lot more comfortable. It was easier to spend long hours on the job when I was wearing the vest.”

Officer Breanna Montgomery said the vest allows her to sit up straight in her squad car, something that isn’t possible with the fully equipped belt. Since she spends many hours in her vehicle completing paperwork and other tasks, the awkward sitting position strains her back, she says.

“When I have the vest on, instead of sitting curved forward, I can sit up straight,” said Montgomery, who has been an Eau Claire police officer for more than three years. “Also, when I’m on calls, if I’m standing for a long time, I don’t have extra weight on my waist so it’s more comfortable and easier on my back.”

While it is impossible to eliminate all the health-related challenges that police officers face, the vest does address issues with lower-back pain, which is among the most common health problem reported by officers, especially patrol officers, Rokus said.

“Policing is a physically demanding profession,” said Rokus. “Officers spend a lot of time in their vehicles because they use them as their offices. They also often stand to talk to people or hold suspects, or chase a combative suspect, all while carrying 30 pounds of police equipment on their waists.”

As a result, many officers experience constant back pain, diminishing the quality of their lives, Rokus said. They also miss patrol shifts because of back issues, which leads to staffing shortages, overtime costs and worker comp claims, he said.

“The health improvement for our officers is important,” Rokus said of the vests. “But there also should be a reduction in health care cost and lost time due to injury, which is good for our community.”

Knowing the strain that the heavy belt puts onto officers’ backs during their 10-hour shifts, the researchers anticipated that their study would find that the vests would ease back pain, Bougie said.

“But we were surprised by just how big of a difference the vests made in how the officers rated their pain,” Bougie said. “When the officers went from the vest to the belt, there were really big jumps up in the levels of pain they reported.”

Other than a study in Sweden, Janot said he doesn’t know of any other research on this issue.

Given its importance and the limited research done, interest in UW-Eau Claire’s findings is significant and widespread among law enforcement agencies, Janot said.

“The vest-versus-belt issue sounds like a fairly simple question but it’s actually very complicated,” said Janot. “Law enforcement agencies all over want to know if the vests can help address officers’ back problems. Like in Eau Claire, they want data that will help them make an informed decision.”

Since the study was announced in the spring, Janot has been contacted by dozens of law enforcement agencies from across the country asking about the results.

This winter, the UW-Eau Claire research team will present its findings to top law enforcement officials from agencies across Wisconsin.

“It’s exciting to partner with our community, but it’s also exciting to know that our work may make a difference far beyond Eau Claire,” Janot said.

Bougie said it’s incredible to know that her work as a student researcher will make a positive difference in the quality of the lives of police officers here and elsewhere.

“Knowing I am helping these police officers who keep us safe is pretty special,” said Bougie, who plans to work as a physical therapist after graduate school. “It feels like I am giving them something in return for what they do for all of us. That’s an amazing feeling.”

While the vests-versus-belts question is at the center of their project, the researchers also built a biometric profile of more than three dozen active-duty police officers, giving the ECPD a look at the overall health status of its officers, Janot said.

These screenings give the ECPD a baseline that they can use to identify strategies to improve the overall health, well-being and readiness of their officers, and to identify possible underlying issues that contribute to officers’ health issues, Janot said.

“Having the answers to a lot of small questions can be used to make a big difference,” Janot said.

The information gained from the screenings will be used as part of the ECPD’s ongoing wellness programming, Rokus said.

By expanding its research to include the biometric screenings, researchers provided the ECPD with important information about the health of its officers, and UW-Eau Claire students gained valuable experience using high-end equipment as part of a real-world study, Janot said.

Given the success of the project with the ECPD, Janot hopes to continue to work with the department and to partner with other local agencies to help them solve problems.

“We have the students, cutting-edge technology and expertise to gather the information the ECPD and other agencies need to address a variety of problems,” Janot said. “We’ve shared our data with the ECPD, but we’re not done yet. Interest in this study is extremely high so we will share what we learned, but also are looking for ways to build on it.”

For more information about the police vest research, contact Dr. Jeff Janot, professor of kinesiology, at 715-836-5333 or janotjm@uwec.edu, or Matt Rokus, deputy chief of police, at 715-839-4979 or Matt.Rokus@eauclairewi.gov. For information about The Vest Man company’s hybrid vest carrier vests that were used by officers in the study, contact John Gurrola at 310-864-1567 or by email at john@thevestman.com.