EAU CLAIRE —  Farmland owners in two western Wisconsin counties soon will have a new resource to guide them as they consider next steps in establishing and maintaining habitats to restore endangered Karner blue butterflies and other pollinators in the region.

Dr. Paula Kleintjes Neff, a professor of biology and entomologist at the University of Wisconsin-Eau Claire, collaborated with an international conservation organization to produce a handbook for area landowners who are enrolled in a U.S. Department of Agriculture Conservation Reserve Program dedicated to restoring Karner blue habitat.

“This truly is conservation science,” Kleintjes Neff said of the handbook. “In cooperation with the USDA Farm Service Agency and USDA Natural Resource Conservation Service, we are building a bridge between science and management. We are taking what we’ve learned through our local research and literally putting it into the hands of landowners.” 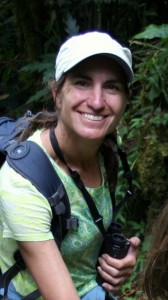 Since 2008, 48 owners of nearly 2,000 acres of privately owned farmland in Eau Claire and Jackson counties have been part of CRP- SAFE (State Acres for Wildlife Enhancement), a federal program that pays landowners an annual fee for retiring marginal agriculture land from crop production. The lands are marginal because they contain highly erodible sandy soils. The goal of CRP is to reduce soil loss and sedimentation, improve surface and groundwater quality, and create wildlife habitat.

The conservation lands were planted with a USDA-approved seed mix of grasses and wildflowers for dry sand prairie including wild lupine, the only food plant used by Karner blue butterfly caterpillars, said Kleintjes Neff, who has done extensive research on the Karner blues and is actively involved in conservation efforts aimed at restoring their native habitats.

The Karner blue butterfly is a federally listed endangered species and is classified as a species of special concern by the Wisconsin Department of Natural Resources. Over the last two decades, Karner blue populations have declined, primarily due to the loss of habitat. Small populations remain in several states, with the largest populations in Wisconsin.

Farmlands enrolled in the CRP-SAFE program are within the historical range of the butterfly, with some falling into areas that the Wisconsin DNR classifies as having “high potential” for Karner blue recovery, Kleintjes Neff said.

“CRP-SAFE for the Karner blue is one of the largest acreage efforts nationwide to increase an endangered butterfly’s populations on private land,” Kleintjes Neff said.

The handbook, titled “CRP-SAFE for the Karner Blue Butterfly,” includes recommendations on how the lands can be managed to better provide habitat for Karner blues, other pollinators and grassland wildlife species throughout the growing season. Recommendations include strategies for timing the planting of seeds, seed mixes, and mowing or burning to control weeds, said Kleintjes Neff.

Landowners who enrolled in the conservation program are required to plant their land with the USDA-approved seed mix, Kleintjes Neff said, noting that landowners include farmers with large farming operations as well as hobby farmers with an interest in conservation.

To better understand the success of the plantings already done, Kleintjes Neff and UW-Eau Claire undergraduate students helped to monitor several CRP sites, as well as nearby native grassland sites containing lupine and Karner blues for comparison. The Western Wisconsin Land Trust also has been involved with lupine surveys.

“The participants — the landowners and USDA — want to know if what they are doing is working,” Kleintjes Neff said. “In our effort to help, we have been documenting changes in the insect and plant community for nearly five years. We now are in the process of making recommendations that could improve their conservation efforts at these sites within and beyond their contracts, if needed.”

The researchers found that butterfly diversity and abundance actually has declined on the CRP sites since monitoring began, which is thought to be due to a measurable reduction in native wildflowers and an increase in dominant native grasses, Kleintjes Neff said.

“We found that additional maintenance and wildflower enhancement to provide blooming flowers for pollinators throughout the season is needed at the sites,” Kleintjes Neff said.

While the number of butterflies has declined and no Karners have been documented on the CRP sites, other pollinators have benefitted from the grasslands and meadows that have been established through the CRP program, Kleintjes Neff said. The wildflowers in the habitat provide nectar and pollen for native bees, honey bees, beetles, flies and other insects, she said, adding that the native grasses and wildflowers also serve as caterpillar host plants for a variety of butterflies.

“Pollinator habitat conservation is more important than ever as populations of the domestic honey bee and wild pollinators decline worldwide,” Kleintjes Neff said.

The conservation efforts also are helping to enhance habitat for pheasants, deer and other wildlife of interest to people in this region, Kleintjes Neff said. The native grasses and wildflowers also support rare grassland songbirds, she said.

The soon-to-be-distributed handbook will arrive in the hands of the landowners at the time when many are about halfway through their 10-year CRP-SAFE contracts, Kleintjes Neff said. As contracts come to an end, landowners will need to decide if they want to continue with habitat conservation efforts or farm.

“We want them to have as much information as possible so they will not only consider how they want to use their land in the years ahead but also how they can continue to benefit pollinators,” Kleintjes Neff said.

Kleintjes Neff presented information about her project on the CRP-SAFE for the Karner blue during the fifth World Conference on Ecological Restoration earlier this month in Madison.