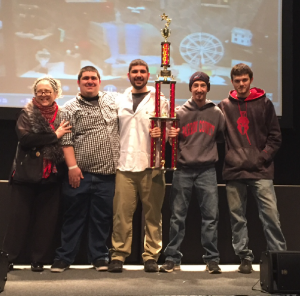 In its third trip in as many years, the University of Wisconsin-Barron County’s (UW-BC) Future Engineers Rube Goldberg team walked away with the Division III National Title and the Best Presentation Award at the 2016 Rube Goldberg Contest on April 9 in Columbus, Ohio. The team finished fourth in last year’s contest and earned a Legacy Award. Goldberg (1884-1970) was a Pulitzer Prize winning cartoonist best known for his wacky inventions.

The goal of the annual contest, which began in 1988, is to conceptualize and build an overly complex contraption designed to accomplish a simple task. This year’s task: open an umbrella.

The UW-BC team began working on its machine in September and completed it two days before the competition.

The students built their machine to pay homage to Nikola Tesla, an inventor, electrical engineer, mechanical engineer and physicist, who designed the modern alternating current (AC) electricity supply system. They incorporated many of Tesla’s engineering ideas and inventions into their design, including an AC motor, hydraulic power, an x-ray machine and remote control cars and boats that functioned as a Ferris wheel.

During Saturday’s competition at the Center for Science and Industry, competitors had three minutes to explain their inventions in a team skit. They then had two opportunities to demonstrate their devices. The UW-BC design, which included 45 steps, was the only one to have two flawless runs with no interventions.

“I am so proud of these young men. They demonstrated all of the skills that we strive to teach as educators: teamwork, perseverance, positive attitudes, creative thinking and problem solving,” said Christa James-Byrnes, UW-BC engineering professor and team advisor. “They also did a great job in demonstrating the machine to interested people and networking with other teams and advisors. It was beyond anything I can explain to see how they went up against big name engineering schools with teams of 10-15 people and corporate sponsors and win.”

UW-Barron County, located in Rice Lake, Wis., is one of 13 two-year UW College campuses in Wisconsin.  It serves approximately 600 students. The UW Colleges are the freshman-sophomore campuses of the UW-System and prepare students for transfer to four-year UW System schools as well as provide the foundation of a liberal arts education.  The UW Colleges has approximately 900 students as declared engineering majors of which 25 attend UW-BC.