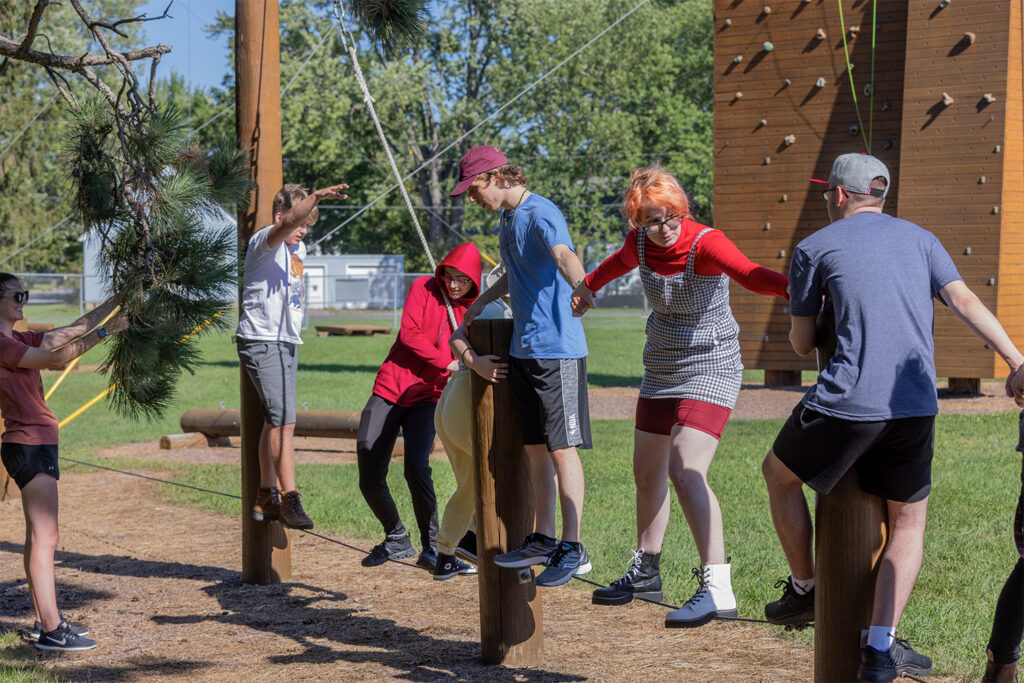 A highly successful program at UW-Stout that supports students each year from historically underrepresented and underserved backgrounds has been recognized with a state award.

During a ceremony Oct. 21 in the Assembly chambers attended by Gov. Tony Evers, Stoutward Bound received the 2022 Ann Lydecker Educational Diversity Award from the State Council on Affirmative Action.

Stoutward Bound is an early-start bridge program for first-year multicultural students. Program participants arrive on campus two weeks early each fall and “join a unique, supportive living and learning community that prepares them for success and helps them transition from high school to college life,” said Mai Khou Xiong, interim executive director of Equity, Diversity and Inclusion and director of Multicultural Student Services.

“Its history and outstanding outcomes mean that we are actively supporting and growing a diverse state workforce that reflects the people it serves,” said Chancellor Katherine Frank. “Because of Stoutward Bound, students are well-positioned and equipped to succeed during their time at UW-Stout.”

Xiong and Quin Brooks, assistant chancellor for Equity, Diversity and Inclusion, attended the ceremony and accepted the award for UW-Stout.

“I’m so proud of our Stoutward Bound program and those who have been dedicated to its success. The students who come through this program not only gain necessary skills for being productive citizens, but they also get to see themselves represented in spaces they are normally not visible in,” Brooks said.

The program is supported by numerous offices and departments at UW-Stout, the UW System and outside donors. The focused leadership skill-building element of the program is donor-funded and receives some of the highest praise from Stoutward Bound students.

First-year student Justina Long, an animation and digital media major from Cumberland, took part in this year’s program. “I was overwhelmed getting to know the campus, mentors, professors and the residence hall. The program helped me open up and start my college plan,” she said.

The award was one of several presented in the state Assembly chambers by the state Department of Administration, Division of Personnel Management, the Virginia Hart Award Committee and the Wisconsin State Council on Affirmative Action.

“We are proud to honor all our Diversity Award winners this week,” said DOA Secretary-designee Kathy Blumenfeld. “These awardees go above and beyond in working towards positive change, building greater inclusion and support for their colleagues, stakeholders, and communities, and the State of Wisconsin is stronger for their tireless efforts.”

Remarks were made at the ceremony by Evers, Lt. Gov. Mandela Barnes and First Lady Kathy Evers.