What do a western Wisconsin farm, a local coffee shop, a free medical clinic and a Catholic church have in common?

They all attract Spanish-speaking community members from the Eau Claire area who are helping UW-Eau Claire students improve their Spanish-language skills and grow their cultural competencies. 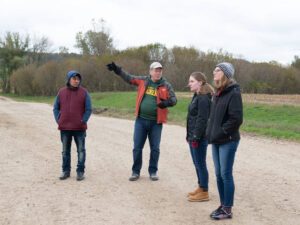 Dr. Carter Smith talks with students in his community-based Spanish language class during a visit to a nearby farm that employs migrant workers.

“Language isn’t something you keep to yourself,” Bethany Johnson, a UW-Eau Claire sophomore from Rice Lake, says of studying Spanish. “You have to get to know people and cultures because a language is something you share with other people. Spanish is a way to make connections and to learn about other people.”

Bethany, who is majoring in biology and Spanish, is among the Blugolds making those important connections with Spanish speakers through UW-Eau Claire’s “Community-Based Spanish” University Honors course.

Now in its third year, the class gives students opportunities to put their language skills to use by immersing them in Eau Claire or nearby places where native-Spanish speakers often gather.

“The students experience different groups of Spanish-speaking people from different parts of the world who are here for different reasons,” says Dr. Carter Smith, the professor of languages who teaches the class. “It gives them a unique experience outside the classroom.”

For example, some students volunteer at the Chippewa Valley Free Clinic, greeting native-Spanish-speaking patients or playing with their children during their parents’ appointments. Others visit with people after the weekly Spanish mass at a church in Altoona or help area schools translate documents into Spanish.

Still others visit a local cafe where Spanish-speaking community members gather weekly for coffee and conversation. The people who meet there are from various Spanish-speaking parts of the world, many of whom are professionals or are married to professionals who have found their way to the Chippewa Valley for different reasons, Smith says. 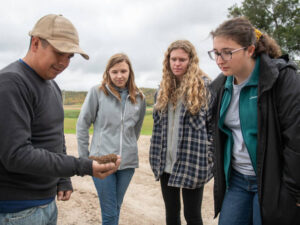 The opportunity to communicate outside the classroom with native-Spanish speakers who have had different life experiences is a wonderful learning experience, Bethany says.

“Grammar and conversational fluency are very different things,” Bethany says. “We get to experiment with communicating with people from different places who often have different accents.”

The students use their Spanish language skills to talk with the workers, learning about the farm as well as the workers’ families and their lives in western Wisconsin and in Mexico.

“It’s a unique out-of-the-classroom experience,” Smith says of the visit to the farm. “The classroom is a controlled environment, but this isn’t controlled. It’s more spontaneous, which is important to language growth.”

Bethany agrees, noting that by touring the farm she gained knowledge about the agricultural industry — an industry that is important to the region — while also growing her Spanish vocabulary.

“We spent the day on a dairy farm learning about and from workers who are here from Mexico,” Bethany says of the daylong visit. “Agriculture is a big part of our community, so it was interesting to learn about the farm. We also learned a lot about the workers’ journeys, all while being immersed in the Spanish language.

“There are lots of aspects of Spanish that you can’t learn in the classroom or in a book, so this was a great opportunity to get to know new people and cultures.”

Grace Johnson, a sophomore accounting and Spanish major from Menasha, says she also found the time at the farm valuable.

It was interesting, she says, to think in advance about questions to ask the workers, to learn new Spanish words that relate to farming, and to then put her language skills to use by talking with the Spanish-speaking farm workers.

“It was really fun to be out there talking with them in Spanish,” Grace says. “Making the connections by talking to them in their own language was fun. We asked questions and they talked a lot in response. I can tell that they really appreciate that we are learning Spanish and that we were interested in them.”

Bringing his students to the farm also helps them put a face on immigration, a topic that students often hear about from media and other sources, Smith says.

“It gives the students a different perspective about immigration than what they hear in politics or on TV,” Smith says. “This is not a political class; it’s not about current events. But immigration is a topic that often makes people get on one side or the other and that’s not necessary.

Through the community interactions, students also learn that their language skills don’t have to be perfect, Smith says, adding that the Spanish-speaking community members appreciate the students’ interest in them and their language.

“When they are out in the community, they are finding out that they can make mistakes, but still be understood,” Smith says. “Most of these students have not yet studied abroad. They are learning that they will survive in a Spanish-speaking country. It’s giving them more confidence.”

While she values the connections she’s making in the community, Bethany says the class also is helping her meet new people on campus.

For example, she recently met with members of UW-Eau Claire’s Latinx Student Association, something she likely wouldn’t have thought to do on her own.

“I took this community-based Spanish class because I wanted to form connections,” says Bethany, who will study abroad in Spain in the 2020 spring semester. “I wanted to force myself to speak Spanish outside of the classroom. It’s easy in class to hide behind a book or know how to speak in that setting. It’s intimidating to talk with native Spanish speakers because it’s easy to think you’re not good enough. In this class, I’m making those connections on campus and in the community.”

Looking ahead, Grace and Bethany say having strong Spanish language skills will broaden their opportunities after graduation.

Knowing a second language is valued by employers, and the community-based Spanish class will help them demonstrate that they have experience interacting with people from different backgrounds, the students say.

“I will be able to make connections with more people if I can speak to them in Spanish, which means the business I work for can broaden the scope of people they can reach,” Grace says of why a future employer would find her Spanish language skills valuable.

Bethany, who is leaning toward a career in education, says having Spanish-speaking skills, as well as an understanding of different Spanish-speaking populations and cultures, will help her better understand and connect with diverse student populations. Recognizing that a significant number of Spanish-speaking people live in western Wisconsin is what first inspired her to begin studying Spanish when she was still in high school, Bethany says.

“You don’t have to travel thousands of miles to encounter someone who speaks Spanish,” Bethany says. “They are in our communities. It’s important to know them and their stories.”

That philosophy, Smith says, aligns perfectly with the goals of his community-based Spanish class.