The loud, shrill clanking of a hammer hitting metal breaks the cheery chorus of birds singing mid-morning in May. With the stark, metallic sound you would think the trees are being harmed, but the opposite is true.

Scientists from UW-La Crosse, Michigan State University, the University of West Virginia and the Wisconsin DNR are straddling steep Western Wisconsin hillsides near West Salem to capture tree trunk samples. They hope to save a unique grove of chestnut trees. Throughout the past two decades, these and other researchers have made an impact.

By 1987 the blight fungus affecting American chestnut trees in the Eastern U.S. had spread to the Coulee Region site with chestnuts dating back to the mid-1880s. The disease causes cankers in the tree bark that can expand around the trunk—cutting off the tree’s nutrients and killing the infected trunk or branch. In 1992, researchers introduced fungal viruses to study and attempt to start biological control of the disease in hopes of using one organism to control another. 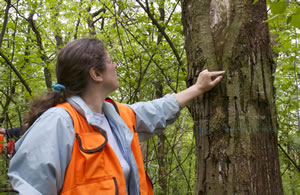 UW-La Crosse Assistant Professor of Biology Anita Baines points to a canker in a chestnut tree caused by a blight fungus. The cankers can expand around the trunk—cutting off the tree’s nutrients and killing the infected trunk or branch. Researchers from UW-L and elsewhere are working find a stop of the blight.

They’ve found success. When the introduced viruses, called hypoviruses, infect the blight fungus they reduce the fungus’ ability to invade and kill the tree. Once the fungus is weakened, the tree uses its own defenses by producing a healing tissue to wall off the disease.

UW-L Assistant Professor of Biology Anita Baines knows the 50-acre grove of chestnuts in West Salem well. She conducted research there while a Michigan State graduate student before she returned in 2009 to teach organismal biology and plant microbe interactions in UW-L’s prestigious Biology Department.

Today, Baines is participating in a $5,000 annual research grant spanning three years from the American Chestnut Foundation. This most recent grant brought the total for the Coulee Region research project among the three institutions to $50,000.

Baines says the goal is to recreate what has occurred naturally in Europe and parts of Michigan — controlling the chestnut blight fungus by introducing a hypovirus that infects the fungus. 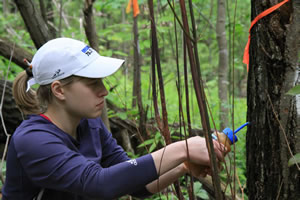 Brynn Sundberg, a UW-La Crosse junior studying cellular molecular biology, treats a chestnut tree with hypoviruses, intended to infect the blight fungus and reduce the fungus’ ability to invade and kill the tree.

“By making the fungus sick, the growth rate and reproduction of the fungus decrease,” she explains. “By slowing down the fungus, the trees can respond to infection and recover.”

Researchers are also trying to understand why hypovirus infection is more successful in some places (such as Michigan) than in others (such as West Virginia).

Additionally, researchers want to understand how introducing the hypovirus in a canker can affect entire American chestnut populations. Along with scientists from Michigan and West Virginia, Baines is reaching out to colleagues from two UW-L departments — computer science and mathematics.

Assistant Professor of Mathematics Eric Eager has been modeling short-term and long-term hypovirus effects to predict what will happen in the future. “I’m getting a hands-on look at what my equations say,” notes first-year faculty member Eager joking that “I’m boldly going where few mathematicians have gone before.”

Along with Eager, Computer Science Assistant Professor Martin Allen has been developing a model to understand the dynamics of interactions of individual cankers. Their findings could help determine where the hypovirus should be introduced in the canker — in one or more places. 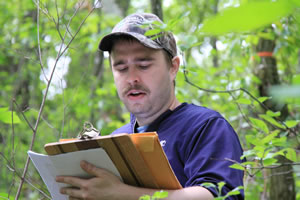 Baines says all three departments are taking advantage of the research. “It’s all mutually beneficial,” she explains. “We all benefit from working together.”

Faculty aren’t the only ones benefitting. UW-L undergraduate biology and math students are getting firsthand skills.

Since 2009, more than 15 undergraduates have been involved with the West Salem grove, interacting with Michigan State and West Virginia University faculty and state DNR researchers. Several students have continued their research in graduate school.

Until the early ’90s, the West Salem grove was the largest uninfected stand of American chestnuts in the U.S. Baines and the other researchers are now working to make it the country’s come-back grove.

“This stand has seen a lot of work done on it,” explains Baines who has witnessed benefits from introducing the hypovirus.

Over the years, she and other researches have discovered the viruses they introduced have slowed down or in some cases even stopped the cankers. And, they’re finding the hypovirus introduced years ago is now naturally appearing in trees that haven’t been treated.

“That’s good because now it’s moving on its own,” she explains. “The trees are getting a chance to respond to the infection.” 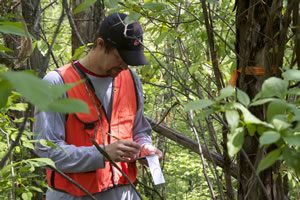 UW-L Assistant Professor of Mathematics Eric Eager headed into the woods this summer to see firsthand how research is documented on the tree. Eager is modeling short-term and long-term hypovirus effects to predict what will happen in the future.

Baines says there is national interest in saving the stand. She has been invited to give talks on the research at national conferences.

“If we are successful in protecting these trees, then we can try to apply what we have learned to other areas of the U.S.,” she notes.

The research could be key for the American Chestnut Foundation as it tries to reintroduce hybrid American chestnuts that have been bred with resistant Chinese chestnuts. The hybrids aren’t completely resistant to infection, so the hypovirus is important.

The researchers hope their work could help bring American chestnuts back into their native range in eastern U.S. deciduous forests.