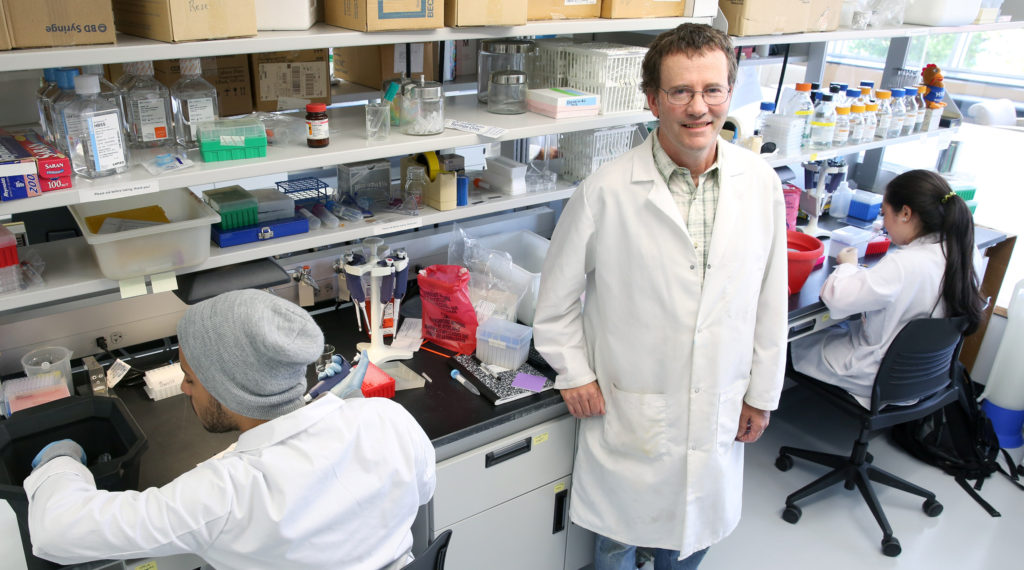 Menomonie, Wis. — A University of Wisconsin-Stout biology professor and his students may have made an important discovery in the effort to determine why honey bee hives are dying out during the winters in the Upper Midwest.

Biology Professor Jim Burritt and his students have published research about a new strain of the bacterium called Serratia marcescens strain sicaria. With evidence of its killing power, they chose the name sicaria, which means assassin, and Ss1 for short.

“Our results indicate that Ss1 may contribute to the wintertime failure of honey bee colonies. We believe this is important because most beekeepers in our area lose over half of their hives each winter. In Dunn County, the percentage of winter hive failure rates has been as high as 80 percent recently,” said Burritt, himself a longtime beekeeper.

The bacterium came to light under a microscope at UW-Stout as researchers looked for a different organism in blood drawn from sick bees in Dunn County. They saw something unexpected. 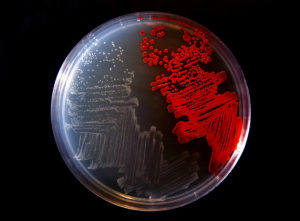 A culture plate from a UW-Stout biotechnology lab shows, at left, the colorless bacterium Serratia marcescens strain sicaria discovered by university researchers. At right, for comparison, is another type of bacteria.

“It was clear we were looking at something different. As we did more testing on the organism, we began to realize we may be working with a new threat to honey bees. We then collaborated with experts in bacterial genetics and biochemistry at the University of Wisconsin-Madison, who used mass spectrometry and three independent, whole-genome methods to confirm this organism had not been previously described in the literature,” Burritt said.

With evidence of a possible new disease in bees, UW-Stout then recruited beekeepers in eight west-central Wisconsin and eastern Minnesota counties and received support from the Wisconsin and Minnesota beekeeping associations to provide samples from 91 hives for testing.

Burritt and his students tested 3,219 honey bees and 1,259 Varroa destructor mites, found in the hives, between December 2014 and September 2016. Ss1 was found in bees and mites from every participating county.

The UW-Stout discovery is a positive step toward a possible solution. “Though our study does not provide information on how winterkill can be stopped, we believe it will create a clearer picture of the diseases and challenges that honey bees face. This view will be important in eventually developing strategies to help bees survive the long months of winter,” Burritt said.

“The well-being of honey bees and other pollinators is crucial to our ecosystem, a wholesome environment and our economy,” he added.

Along with finding the new strain of bacterium, also groundbreaking within the study is confirmation that Varroa destructor mites carry the Ss1 bacterium, Burritt said. Previously, mites were known only for transmitting viruses to honey bees.

The eight-legged Varroa mites are about the size of a poppy seed, Burritt said. “With the help of the students, we developed a method to efficiently obtain culture information from many individual mites,” he said. 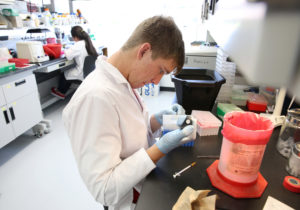 The research, with student co-authors Anna Winfield, of Bloomer, and Jake Hildebrand, of Menomonie, was published Dec. 21 in PLOS One, a peer-reviewed, open-access, online publication for science and medicine research. The study, “Sepsis and Hemocyte Loss in Honey Bees,” can be found at http://journals.plos.org/plosone/article?id=10.1371/journal.pone.0167752.

Winfield developed two screening tests to identify Ss1 based on its biochemical properties. She graduated with honors in May 2016 in applied science and is a microbiology graduate student at UW-La Crosse.

Hildebrand, a senior, led the testing of bee blood, hemolymph, for infection and identified proteins in the blood that are important to their immune system. 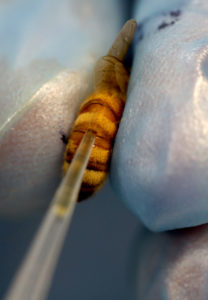 Five other UW-Stout students are recognized in the published research. They are Morgan Ingold, of Waterford; Matheus de Jesus, of Brazil; Viviane Oshima, of Brazil; Brooke Sommerfeldt, of Park Falls; and Amber Thums, of Butternut. Professor Steve Nold provided help with bioinformatics.

“The honey bee studies at UW-Stout have required the research ideas, interest and hands of a lot of students, and we had plenty of each,” Burritt said.

The research also found that the Ss1 bacterium has 65 genes not found in other strains of the Serratia genus, suggesting Ss1 has been successful borrowing genetic information from other bacteria.

In 2014 Burritt and his students published another study in PLOS One describing their new technique of hemocyte profiling of the blood cells of honey bees. The latest research builds on the previous effort by using the new profiling method; bees infected by Ss1 were found to have fewer of the blood cells that defend against bacterial infections, suggesting Ss1 may weaken bees’ immune systems.

The honey bee project at UW-Stout, led by Burritt, is in its sixth year and has involved hundreds of UW-Stout students doing research in microbiology classes, courses within the applied science major and in locations beyond the classroom.