As a member of the student research team in the chemistry lab with Dr. James Phillips, Jordan Munos found her passion for biomedical research. She is pictured here installing a liquid nitrogen trap on the preparatory vacuum line, just one of many complex instruments Blugold researchers like Munos learn to master.

As an incoming Blugold four years ago, Jordan Munos knew she wanted to go to medical school, but wasn’t certain what major would be her best route to get there.

The Aurora, Illinois, native gravitated toward science and discovered an intriguing degree program at the University of Wisconsin-Eau Claire that would combine chemistry and biology, two subjects she enjoyed in high school. Munos decided to gamble on a field she knew little about but checked all the boxes for her — she declared a biochemistry/molecular biology major.

That gamble has paid off in some significant ways.

“It was honestly a total shot in the dark,” Munos admits of her selection process. “I had enjoyed biology and chemistry, so I thought ‘why not combine the two?’ I had no idea what biochemistry was. I was looking for a challenging major and definitely got it with BMB; I’ve loved it.”

Munos says she loved the program so much, and the opportunity to conduct collaborative research, that she has decided to pursue a career in research, enrolling this fall at the Medical College of Wisconsin for a Ph.D. in biomedical science.

“I still did want to help people and be a part of the medical field, but I love doing research — it is something that I do not want to give up,” says Munos, who is currently most interested in the field of pharmaceutical design, applying her computational chemistry experience in drug development.

Getting her grounding in student organizations 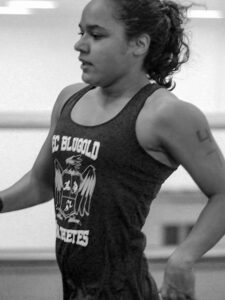 Training for athletic competition through the Blugold Triathlon Club offered Jordan Munos a variety of ways to build confidence and stamina that carried beyond the race courses and into her life in general.

For a new alumna with the skills, experience and career plan clarity that Munos garnered as a Blugold, it would be hard to guess that she struggled a bit as a first-year student. It was a struggle that she says was based in finding that feeling of home, of knowing she was in the right place with the right people.

“I became involved with two clubs on campus,” she says. “I was looking for people who had similar interests as my own, and a place where I felt like I belonged.”

Munos found that sense of belonging in the Women and Gender Minorities in STEM Club (WiSTEM) and in the Blugold Triathlon Club. The “Tri Club,” as she calls it, allowed Munos to meet people, stay active and explore Eau Claire with a group of people who she says “meet all athletes where they are in fitness level and work with anyone who shows up.” She completed six triathlons as a member of the club representing UW-Eau Claire.

The Blugold Triathlon Club is advised by Dr. Matthew Evans, professor of physics and astronomy, who saw in Munos a competitive spirit and level of discipline in the sport that she also displayed in academics.

“Jordan didn’t hold back, and showed the same tenacity she had in her coursework to train for, and complete, the Eau Claire Half Marathon during COVID,” Evans says. “The team bestowed on her the one-of-a-kind Smarty Pants [AND] Strong Athlete Award, recognizing that she could easily pass back and forth between her mental and physical strengths.”

As a WiSTEM member, Munos found the community impact that the group experienced in outreach events to be the most rewarding aspect of participation, and something she plans to incorporate into her graduate school and career plans.

“We do outreach events at local schools, showing students demonstrations to get them interested in STEM. I want to continue this in my education and career,” she says. “From personal experience, there are so many different fields that I never knew about in high school, so making students aware of all that STEM has to offer is something that I love doing.”

Creanna Cote is an academic advisor at UW-Eau Claire and serves as faculty advisor to the WiSTEM student organization. She was grateful for Munos’ leadership in planning outreach events and delivering on the mission of the club.

“Jordan started with the organization as a first-year student and moved into executive roles each year, serving as secretary and vice president, and ultimately as president her senior year,” Cote says. “She was instrumental in planning and hosting local Girl Scout troops for a Science Day on campus. This event brings together the mission of the group to connect to one another and support future generations to explore and pursue STEM fields, no matter their background.

Munos feels strongly that she and other women and underrepresented groups in STEM need to help dispel myths about what types of students can best succeed in these fields — she says there is no typical STEM student.

“I also think it is very important to show that STEM does not have a ‘mold,’ that anyone can be in STEM.”

Finding her passion in chemistry research 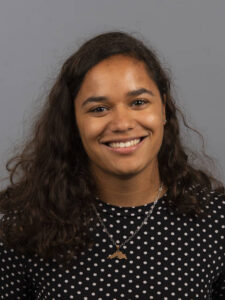 Just as Munos found some of her personal connections, goals and motivation through student organizations, becoming a member of a chemistry department research team allowed her to hit her stride academically, making the most important discovery of all along the way — that she wants to make research her full-time career as a biomedical research scientist.

“Coming to college I was dead set on medical school, but joining a research team my sophomore year and becoming a McNair Scholar my junior year opened my eyes to all the other career options in the medical science fields,” Munos says.

While conducting research as a member of Dr. James Phillips’ chemistry lab team during her junior year, Munos was recommended to the Ronald E. McNair Scholars program by then interim director Evans. He says he knew that Munos would be a great match for the program goal of providing advanced research opportunities to capable undergraduate students who may not yet see themselves pursuing graduate school.

“I planted a seed in her mind that she could benefit from the support the program could give her, as she pursued goals she didn’t even know she had,” Evans says. “Jordan came to embody what the McNair program was designed to do for students, which is to help them to realize that they have the support to further their education beyond UWEC, and that they belong in graduate school if they choose.”

Munos, who was also a graduate of the University Honors Program, was able to use her research in Phillips’ lab for the basis of her McNair project, and through these intersecting research avenues, she gained knowledge and experience that far outreached what she felt she could have learned in classrooms alone.

“I was able to learn what computational chemistry is as well as matrix isolation IR spectroscopy and have come to love the work I did in our lab,” she says. “I gave nine separate conference presentations, including a poster presentation and an oral presentation at CERCA. My research gave me confidence in my abilities as a scientist and being able to present in front of an audience. It also allowed me to further develop my teamwork and leadership abilities.”

As her primary chemistry research mentor, Phillips sees several exceptional qualities in Munos, who started in his lab as a sophomore. Phillips says he trusts Munos will become a highly capable research scientist as she pursues her doctoral degree.

“What impressed me most about Jordan through the years was her growth, not only as a scientist but as a group leader and otherwise incredibly well-rounded human being,” Phillips says, pointing out the correlations between Munos’ athletic background and her long-term goals as a scientist.

“With an athlete’s mindset and training, she seemed to immediately pick up on the idea that engaging in a long-term research project was an opportunity to challenge herself to learn new things — somewhat outside her major coursework — and challenge herself in ways that would otherwise not be possible,” Phillips says. “Jordan’s insight as to how this would promote her professional development is unusual. She saw the intangible benefits as personal growth that would make her a more capable researcher.”

To Phillips’ point, Munos often has looked for ways to grow not just as a student, athlete or researcher, but as a human being. For example, after fulfilling a service-learning requirement after just one semester of volunteer work at Mayo Clinic Health System in Eau Claire, Munos continued that work through her entire college career, completing another five semesters of weekly volunteer hours.

“I started at Mayo in Eau Claire as a sophomore working as a patient transporter in the clinic,” she says. “I then became a surgery department liaison, communicating updates to family members on behalf of surgeons and other departments involved in a case. I really loved interacting with the families, Mayo staff and other volunteers — I enjoyed being able to carry that activity through my whole time as a Blugold.”

It’s clear that when Jordan Munos commits to a goal — in the research lab, on a triathlon course or in spreading the word about the role of women and minorities in STEM — she is going to challenge herself to take it a little further than most might expect and to accomplish more than even she set out to do.