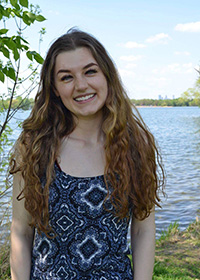 Brooke Shepherd, a recent graduate of the University of Wisconsin-River Falls, has earned a top award from the Wisconsin Broadcasters Association (WBA) for her reporting on obesity in western Wisconsin.

Shepherd won first place in the news series and documentary category in the annual WBA Student Awards for Excellence. Her reporting during the summer of 2021 resulted in a 30-minute radio documentary, “Obesity trend in western Wisconsin worries experts.”

Shepherd’s work was supported by a Donovan E. Rasmussen Broadcast Journalism Fellowship through the UW-River Falls Foundation. The documentary aired on the campus radio station, WRFW.

Shepherd, from Stillwater, Minn., graduated in December 2021 with majors in journalism and animal science and a minor in Spanish. While at UWRF, she served as assistant editor and editor of the student-run campus newspaper, the Student Voice.

The award was announced during the WBA Student Seminar held March 5 in Middleton.