For the first time in 13 years, the University of Wisconsin-Whitewater Warhawk Marching Band soared into Perkins Stadium with new uniforms, thanks to Glenn Hayes, professor of music, and uniform designer and alumnus Michael Cesario. The new uniforms, which feature a design that evokes the wings of a hawk, is the latest the two have collaborated on over the years.

Since 1987, Hayes has served as the director of the UW-Whitewater Marching Band. During his tenure, hundreds of performances have energized not only Perkins Stadium but also famed Lambeau Field and stadiums hosting the NCAA Division III National Championship football games. 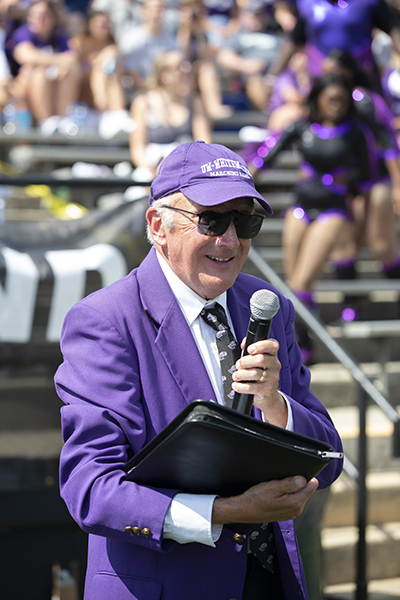 Pictured: Glenn Hayes, professor of music and conductor of the Warhawk Marching Band, announces the halftime performance that featured the band’s new uniforms at Perkins Stadium on Saturday, Sept. 10, 2022.

“There have been so many shows. Packers games, Brewers Opening Days, hosting State Show, Homecomings,” said Hayes. “At many of these events we are able to connect with alums, share memories and hear how proud they are of what the band is doing now. Each year when new students are brought into the marching band family, I get the opportunity to see a special connection that only band members can know. The instant welcome and support for new members holds a special place in my heart.”

Cesario, who graduated with a Bachelor of Arts in theatre with a minor in speech in 1971, is also an alum of the music fraternity, Phi Mu Alpha Sinfonia. Since graduating, he has built a notable career in design and is known for his work on Broadway, television, and repertory stages across the country. Recognized as a national leader in pageantry arts, Cesario is in demand as an adjudicator and clinician for high school bands nationwide and is responsible for creating the trademark uniforms of America’s finest bands, drum corps, and color guards through FJM Inc., a uniform store based in Montgomery County, Ohio.

“Let’s be clear, since the age of nine in 1957, I was consistently the worst musician in any group,” said Cesario. “But sometimes the kid needs the band more than the band needs the kid. Participating gave me the experience to know that athletic fit and breathable fabrics would make us all more comfortable and flexible. Between band and theatre, I could combine the best of both worlds for better function and design.”

Hayes said Cesario asked him if he had any thoughts about the design this time around. “After teasing him about finally asking me for input I said ‘Maybe incorporate a wing idea.’ He responded, ‘Okay. Anything else?’ I said, ‘Yes. Make a statement.’” 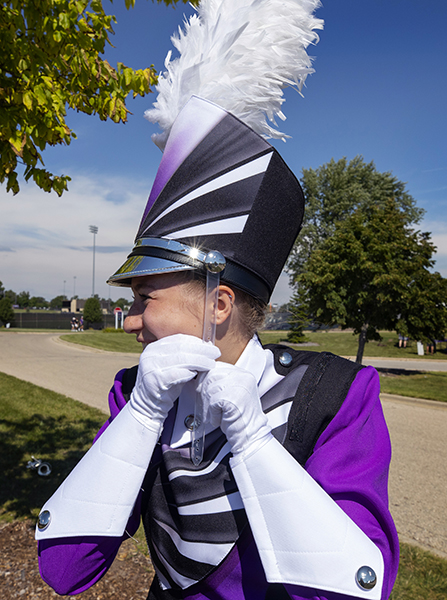 Pictured: Emma Yeakley, a music major, fastens the strap of her shako on the practice field before the football game. The UW-Whitewater Marching band debuted new, redesigned uniforms at the home opener football game at Perkins Stadium on Saturday, Sept.10, 2022.

“Glenn and I explored several ideas, but we kept coming back to the abstract power of flight,” said Cesario. “The hawk wing provides a strong visual component to represent a soaring hawk, but also shows how the elements of the band pull together from all over the campus, from all over the country, to become a singular ambassador of the university.”

The excitement for the uniforms has been universal and almost overwhelming.

“The ‘chatter’ on social media has been surprising,” said Hayes. “The number of interactions, shares and retweets is off the charts. When we debuted the final sketch at our banquet in December, the students literally cheered. It is a stunning design. It is a statement. The hawk wing concept on the front that carries up into the hat is pure genius — and pure Cesario. On the wall facing the stadium there is a banner that reads ‘Powered by Tradition.’ It’s a statement about the legacy of our athletics programs. The marching band is also powered by tradition — one of excellence in performance. And we’ve always been fueled by innovation. This uniform captures both perfectly.”