Advanced Chemical Systems Inc. (ACS), a Milwaukee-based company, is innovating water pollutant detection with cutting-edge optical sensory technology.  The patented technology, developed by Dr. Peter Geissinger at the University of Wisconsin-Milwaukee, uses propagating light emissions as a means to detect trace metals. Rather than sending off water samples to a lab, which can take days with contaminants still present, the sensory technology takes only minutes.

According to Tom Dougherty, president and owner of ACS, the technology has allowed them to not only accelerate the process but also save chemical costs.

“If the device senses that we’re at 5 parts per million of zinc, then we use less chemicals and we’re able to save on the return investment because there are savings in the chemistry needed,” said Dougherty. “I believe that this could really change our industry.”

ACS has advanced the commercialization of its technology through the support of Small Business Innovation Research grants administered through the National Science Foundation.  In 2011, the company was awarded a grant of over $150,000. It is now seeking additional funding through a second phase of proposal submissions.

Dougherty credits his company’s funding success to the long-standing relationship it has with consultant Dave Linz, who works with the Center for Technology Commercialization (CTC), a part of UW-Extension’s Division of Entrepreneurship and Economic Development. CTC assists technology entrepreneurs to commercialize their technology.

“Without Dave’s assistance, we would not have received the Phase I grant and gotten to Phase II,” said Dougherty.

The company was assisted by CTC micro-grants to hire Service Provider Steve Royko for the second phase of proposals. 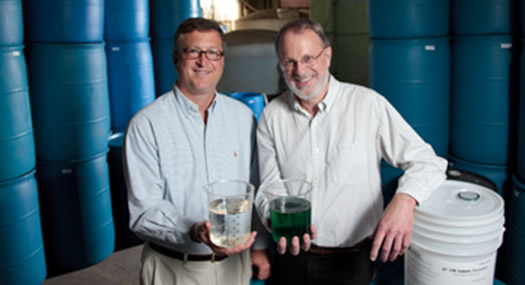