With help from UW-L business classes and the university’s Small Business Development Center, Hrudka built a single-speed bike business from the ground up, Wyatt Bicycle Co.

“From the moment I sold my first bike, I thought ‘I’m on to something.’ It’s been very exciting to watch it grow,” says Hrudka.

He went from working out of a 200-square-foot storage space to the 2,500-square-foot warehouse and office space where he works today at the Coulee Region Business Center, 1100 Kane St., La Crosse. He has sold around 500 bicycles to customers all over the U.S.

His Wisconsin customer base is growing steadily with six current dealers.

“People really like the fact that it’s a local company,” says Ben Leach, owner of Bikes Limited in La Crosse, one of the dealers selling Wyatt Bikes. “The customer service is great. With major companies, we may see the sales representative a couple times a year. We see Wyatt a couple of times a week.”

Wyatt Bicycle Co. also sells direct to customers online, so the business is bringing money into the state from all over the country and Canada. Hrudka likes that his bikes are bringing dollars in and he is able to support local businesses through bike production. The newest model bike, the ‘Street King,’ is painted at a small business, Premier Powder Coating in Ettrick, Wis. All the bike decals are made by a La Crosse business, Klings Designs.

“Wyatt Bicycle Co. is all about supporting other small businesses, so that’s why we try to incorporate our business processes with other Wisconsin businesses,” explains Hrudka.

Hrudka found his business opportunity after realizing a common problem students had with shifting their gears improperly. They brought their bikes into UW-L’s outdoor equipment rental service, Outdoor Connection, where he worked. 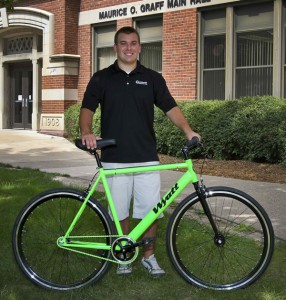 May graduate Wyatt Hrudka earned a degree in Information Systems. He is founder of Wyatt Bicycle Co., pictured with his 2013 model single-speed bike.

However, the nature of the riding they were doing— slowly down campus streets — didn’t call for complicated shifting. Hrudka designed his own single-speed bicycle geared toward college students.

A shipment of 170 arrived in November 2011 and nearly all sold within the first year and a half. He was surprised to find orders were coming from not just college-aged buyers but a diverse group — the majority ages 30-60 — from all over the world.

“It’s a trend right now to have single speed bikes,” he says. “Gas prices are rising and people want bikes that are simple, reliable and affordable.”

Transferring to UW-L was one of the best decisions Hrudka ever made, he says. He saw how he could incorporate an Information Systems background into business with tools such as website management and using computer programs to maximize efficiency. UW-L’s Small Business Development Center helped him develop a business plan, which has so far been successful.

Today Hrudka has one employee who helps him assemble the bikes. People can purchase bikes at several dealers in the state (including Bikes Limited in La Crosse), or order through his website, wyattbikes.com

Wisconsin dealers of Wyatt Bikes include:

Wyatt Bicycles are made of chromoly steel, making them durable and light weight. Hrudka offers single speed and fixed gear bikes in a variety of color combinations. His most recent model sells for $449.