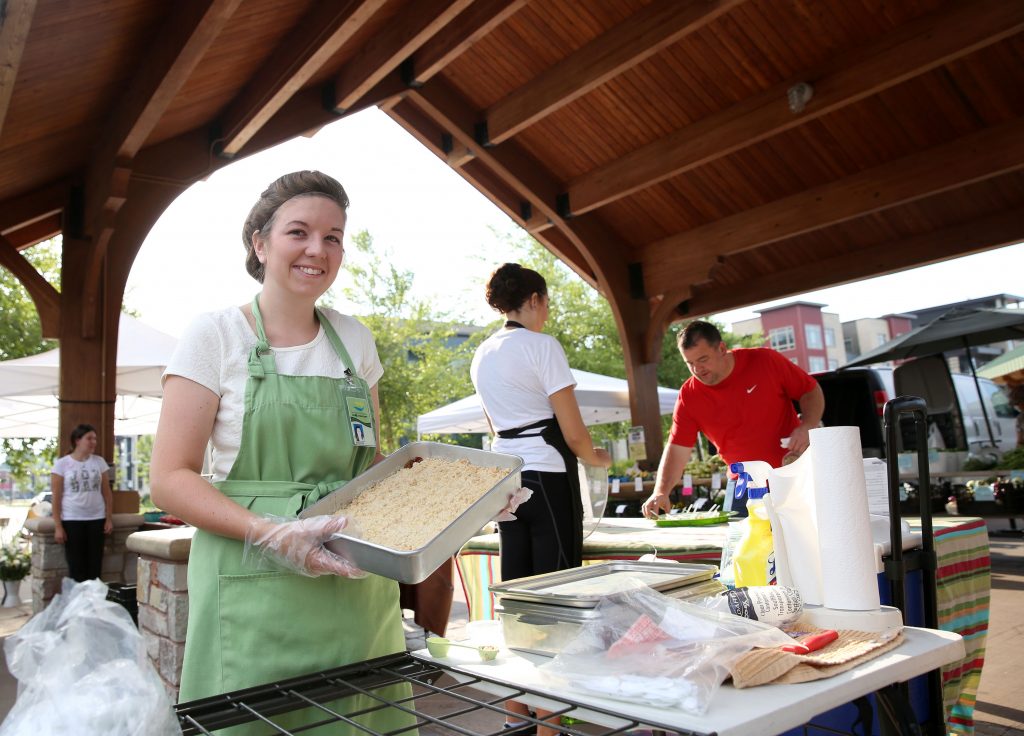 Menomonie, Wis. — University of Wisconsin-Stout undergraduate student Amanda Nass is motivated to eat healthy food, including local vegetables, and wants to educate others to do the same.

Since June, Nass has been volunteering two days a week with the Veggin’ Out program through the Eau Claire City-County Health Department. The program promotes farmers’ markets and eating healthy food.

UW-Stout dietetic students under the oversight of the department operate the Veggin’ Out booth at farmers’ markets in Eau Claire. The students offer free samples, healthy recipe ideas and tips for shopping at the markets. Cooking demonstrations with fresh fruits and vegetables from the market also are provided.

This summer Nass and five other dietetics students are volunteering and earning field experience hours required for their major. The other student volunteers are Takoya Weber, of Menomonie; Caitlin Pyrz, of Minneapolis; Dana Lemke, of Rosholt; Hayden Kusilek, of River Falls; and Mason Wellskopf, of Eleva.

Nass, who averages eight hours a week at the Downtown Farmers’ Market in Phoenix Park, helps and encourages WIC families to shop at the market for fresh local produce. WIC stands for Women, Infants, and Children and is offered through the U. S. Department of Agriculture, Food and Nutrition Service.

At the market, she interacts with people of all ages and to promote healthy eating for everyone by providing healthy recipes and samples every week, she said. 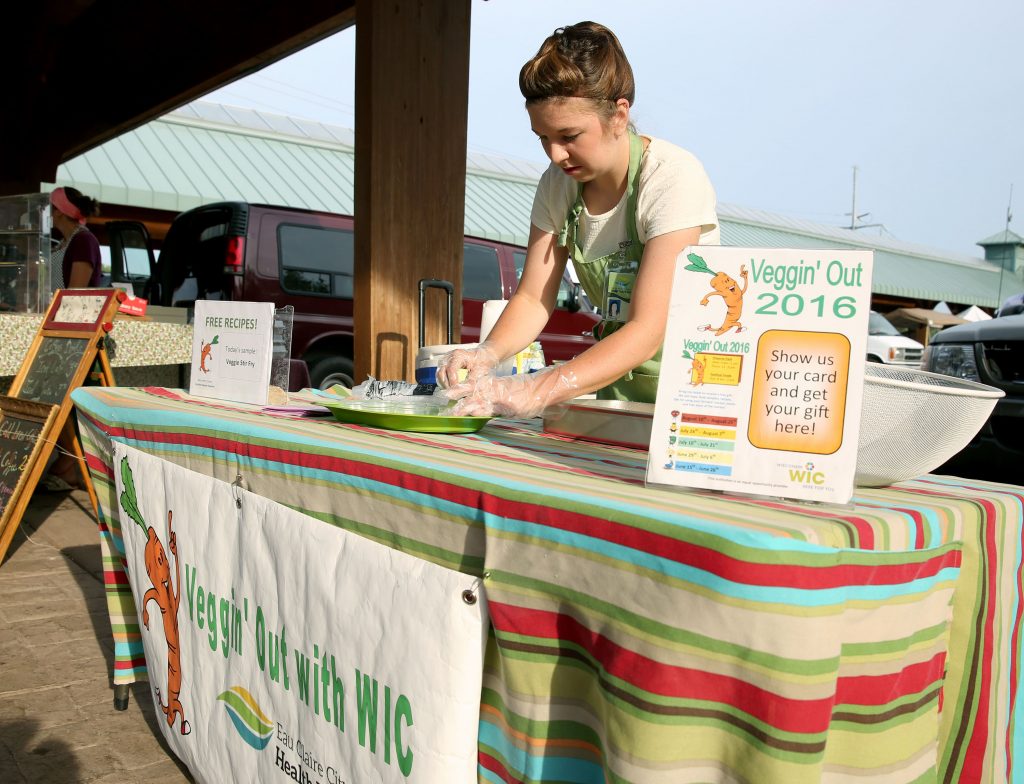 Amanda Nass, a UW-Stout dietetics student, puts out samples at the Veggin’ Out booth at the Downtown Farmers’ Market in Eau Claire.

One day Nass explained to a passer-by the importance of drinking a lot of water and that she was consuming two 16-ounce glasses at breakfast. “Later that person came back to me and mentioned they had been trying that same method, and they noticed it helped their skin and improved their appetite,” Nass said.

Another piece of advice that Nass received and shares with others is the idea that individuals can pay for their health now or later. “Many people often use the excuse that eating healthy can be expensive, which is true. However, having to pay for hypertension and diabetes medications when you are older can be expensive as well,” she said.

She advocates people taking control and care of their health now instead of “suffering from complications later,” she said.

Nass, of Mora, Minn., will start her senior year in the fall and plans to graduate in spring 2017 with a B.S. in dietetics. She chose UW-Stout because it offered the major she was looking for, and “it seemed like a great school,” she said.

Nass also became interested in dietetics because she struggled with food allergies and thus was forced to pay attention to her diet and how food affects the body, she said.

“I try to encourage others to eat healthy by explaining to them that they will feel so much better by eating healthy foods, and it can also motivate them in other areas of their life as well,” Nass said.

Nass’ favorite healthy foods include just about all fruits and vegetables but especially watermelon, asparagus and kohlrabi, she said.

Nass expects to have an internship during her senior year and hopes to work as a registered dietitian after she graduates.

For more information about the dietetics program at UW-Stout, contact director Karen Ostenso at 715-232-2394 or go to http://www.uwstout.edu/programs/bsd/.