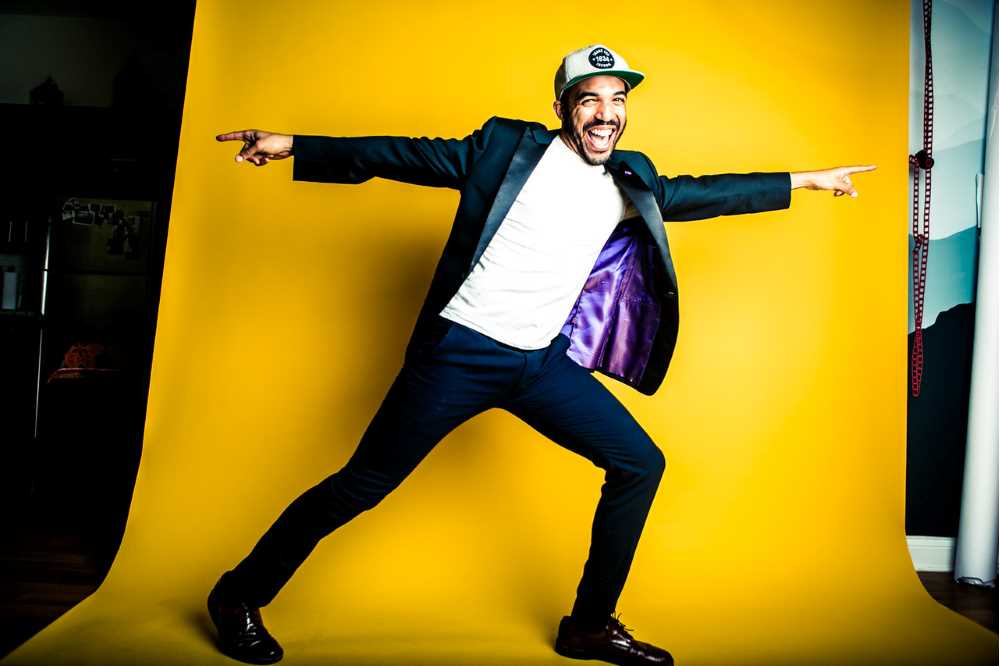 Chris Jones, ’08, is a world-renowned hypnotist and comedian who had his big break hypnotizing Howie Mandel during a 2015 episode of NBC’s “America’s Got Talent.” Jones got his start performing card and magic tricks at UW-La Crosse.

Chris Jones remembers one of his first times performing in front of an audience.

It was the mid-2000s, and he was representing the now-defunct Baird Hall in the Mr. UW-La Crosse competition.

His mind-reading trick failed. His card trick flopped. Then it was time for his final act: levitation.

“I tried to levitate a woman’s driver’s license, and I did,” Jones, ’08, recalls. “Unfortunately, with the spotlight, everyone could see the shadow of the string.”

From inauspicious beginnings, Jones applied himself and slowly but surely learned to captivate an audience. Today, he is a world-renowned hypnotist and comedian, who had his big break hypnotizing Howie Mandel during a 2015 episode of NBC’s “America’s Got Talent.”

“Life is fascinating to me,” says Jones, reflecting on his rise from failed magician to rising star. He even had his own prank show, “Double Take,” on Facebook Watch.

“With hypnosis, you can’t really practice,” he explains. “You can try practicing with a friend, but you’re always going to wonder: ‘Did I really hypnotize you? Or were you just pretending?’ The only way to get better is to go out and do it.”

Over the past decade, Jones has done exactly that, reaching a level of success many up-and-coming entertainers only dream about.

All that time on the road has afforded Jones the luxury of spending more time with his family, while doing fewer shows and focusing on bigger projects. It has also allowed him to give back — in the form of a $10,000 donation to the UWL Foundation, which will be used to create a scholarship program for underrepresented students.

The scholarship honors Ron Rochon, a former faculty member who mentored Jones during his time at UWL and went on to become president of the University of Southern Indiana.

Jones, who holds a bachelor’s degree in sociology, didn’t set out to be a hypnotist.

As a member of the UWL men’s cross-country team, he had dreams of following in the footsteps of Andrew Rock, ’04, and competing in the Olympics.

Jones had always been interested in skillful deception. In college, rather than studying, he would go to Murphy Library to read books about magic. As a resident assistant, he used card tricks to connect with his peers.

But it wasn’t until hypnotist Fred Winters performed at UWL’s Cartwright Center that he saw a career path emerge.

“I chased him to his car after the show, and he told me what books to read if I wanted to get good at hypnotism,” Jones remembers. Winters’ performance, paired with the disastrous Mr. UWL competition, “encouraged me to stop doing magic and move toward hypnosis.”

There were nights he failed to hypnotize anyone.

And there were nights he was so effective that he had to work overtime.

“Once, I was driving back from a show, and I got a phone call,” he recalls. “Someone was still a little bit hypnotized. I had to get them on speaker phone and guide them out of it.”

In 2015, Jones received another phone call — one that changed the trajectory of his career.

“America’s Got Talent,” one of NBC’s most popular programs, was looking to feature a hypnotist.

Jones jumped at the opportunity and immediately began brainstorming ways to impress the judges.

“I didn’t watch the show, but I knew Howie Mandel was one of the judges, and he is famously afraid of germs,” Jones remembers. “I thought, ‘OK, I’ll hypnotize him, and I’ll get him to shake my hand.’”

During his audition, Jones used several techniques, including turning back an invisible clock, to hypnotize Mandel. NBC was not allowed to air the complete act, but producers did show one audience member who was so affected by Jones’ performance that she also became hypnotized.

Jones convinced Mandel to shake not only his hand — but the hands of fellow judges Howard Stern, Heidi Klum and Mel B.

The panel was equal parts stunned and impressed. And while Jones was ultimately eliminated during the Judge Cuts round, his viral performance was a major career boost.

He was able to raise his rates. He was invited to perform at bigger venues and overseas. And he was offered his own show on Facebook Watch, in which he demonstrated the power of hypnotism by working with celebrities such as John Cena, Pamela Anderson and Gabriel Iglesias.

Of course, Jones is aware of the skepticism that colors many people’s perception of hypnotism.

There’s a scientific explanation, he says, that has nothing to do with magic. And it is supported by numerous studies, including a 2016 study by Stanford University.

When a person is hypnotized, researchers say, parts of their brain experience altered activity and connectivity. This affects their ability to perceive what is happening around them. Sometimes, a disconnect will even form between the brain and the body, making them highly suggestible to instructions or commands.

“I don’t mind if people are skeptical. In fact, I encourage it,” Jones says. “Our opinions are our opinions, and they can change. I love when, after a show, someone says they started off skeptical, but now they see that it’s real.”

As his career has progressed, Jones has used his platform not just to share his passion for hypnotism, but to be a positive role model.

When he performs at colleges, he encourages students to look out for one another, to drink or party responsibly, and to treat others with kindness and respect.

If he could hypnotize humanity and issue one command, he says, he would tell people to get a passport, travel the world and experience different cultures.

He established the scholarship for the same purpose: enriching lives and communities through education.

“I want to support students who will get their education and go on to help people,” Jones says. “It’s like an elevator. Once you make it up, it should go back down for the next person.”

Jones will be performing at UWL Saturday, Sept. 3, as part of New Student Orientation. The event is scheduled for 8 p.m. in The Bluffs inside the Student Union.